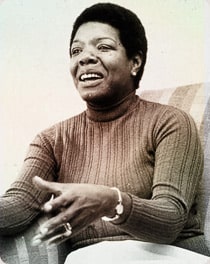 by News Contributor
in Laid To Rest
2

Dr. Maya Angelou passed quietly in her home before 8:00 a.m. EST. Her family is extremely grateful that her ascension was not belabored by a loss of acuity or comprehension. She lived a life as a teacher, activist, artist and human being. She was a warrior for equality, tolerance and peace. The family is extremely appreciative of the time we had with her and we know that she is looking down upon us with love.

(Reuters) – American author and poet Maya Angelou, whose groundbreaking memoir “I Know Why the Caged Bird Sings” earned her international acclaim with its unflinching account of rape and racism in the segregated South, died on Wednesday at age 86.

The prolific African-American writer, known for her lyrical prose and regal speaking voice, died quietly at her home in Winston-Salem, North Carolina, Angelou’s family said in a statement. No cause of death was given.

Major League Baseball had planned to honor her in Houston on Friday as part of the Civil Rights Game festivities, but Angelou announced last week that she would be unable to attend due to health reasons.

Angelou, who was also a civil rights activist, playwright, actress, singer, dancer and professor during her varied career, penned more than 30 books and won numerous awards, including the country’s highest civilian honor, the Presidential Medal of Freedom, from President Barack Obama in 2011.

Her latest work, “Mom & Me & Mom,” about her mother and grandmother and what they taught her, was released last year. In her last tweet on May 23, Angelou said, “Listen to yourself and in that quietude you might hear the voice of God.”

Literary and entertainment figures, politicians and fans mourned her passing on Wednesday.

Obama said his sister, Maya, was named for the author, whom he called “a brilliant writer, a fierce friend and a truly phenomenal woman.”

“A childhood of suffering and abuse actually drove her to stop speaking – but the voice she found helped generations of Americans find their rainbow amidst the clouds, and inspired the rest of us to be our best selves,” Obama said in a statement.

Media mogul Oprah Winfrey, who frequently threw lavish birthday parties for Angelou and considered her a mentor, said she would remember her friend most for how she lived her life.

“She moved through the world with unshakeable calm, confidence and a fierce grace,” Winfrey said.

Angelou, who was 6 feet tall, was born Marguerite Johnson in St. Louis, Missouri, on April 4, 1928. She spent part of her childhood in Stamps, Arkansas with her grandmother after her parents divorced.

At age 7, Angelou was raped by her mother’s boyfriend, who was later beaten to death in an assault that some believed was carried out by Angelou’s uncles. The trauma of the rape and her assailant’s death left Angelou mute for six years.

She began writing during that silent period. She would chronicle the first 17 years of her life in the 1969 autobiography “I Know Why the Caged Bird Sings,” which her friend, writer James Baldwin, had encouraged her to write.

The book, which covers the racism Angelou had faced in the 1930s and ’40s and her fantasies of being blond and white, is considered an American classic.

She never went to college but collected more than 30 honorary degrees. As a teenager Angelou moved to San Francisco, where she pursued an entertainment career, became an unwed mother at 17 and also found a job as a streetcar conductor.

Working as a calypso singer and dancer, she changed her name to Maya Angelou – based on a childhood nickname and the last name of her first of at least three husbands, Tosh Angelos.

In the late 1950s she moved to New York and joined the Harlem Writers Guild before going to Africa, where she worked for newspapers in Cairo and Accra, Ghana.

In subsequent years she mixed writing with singing and working on projects with civil rights leaders Martin Luther King Jr. and Malcolm X. For years she did not celebrate her birthday because it coincided with the anniversary of King’s assassination.

Angelou also directed, wrote and acted in movies, plays and television programs and was a songwriter, educator and popular lecturer. Her acting credits included a role in the ground-breaking television mini-series “Roots” and she wrote the script and score for the movie “Georgia, Georgia.”

She was a Grammy winner for three spoken-word albums.

Nathan O. Hatch, the president of Wake Forest University, where Angelou had been a professor of American studies since 1982, said she was a “towering figure” at the school and in American culture with a profound influence in civil rights and racial reconciliation.

In addition to “Mom & Me & Mom,” Angelou’s other autobiographical works included “Gather Together in My Name,” “Singin’ and Swingin’ and Gettin’ Merry Like Christmas,” “A Song Flung Up to Heaven,” “Wouldn’t Take Nothing for My Journey Now,” “The Heart of a Woman” and “All God’s Children Need Traveling Shoes.”

At Bill Clinton’s request, Angelou wrote “On the Pulse of Morning” and recited the poem at his 1993 presidential inauguration.

“We share the gratitude of so many for Dr. Angelou’s contributions to literature, human rights, and social justice. Her legacy is one that all writers and readers across the world can admire and aspire to,” said Harold Augenbraum, the executive director of the National Book Foundation.