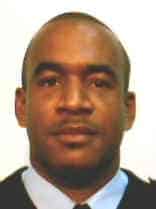 Police officers are mourning the death of 41-year-old Police Constable Garth Francis, who died in his native Dominica on Sunday.

Commissioner of Police Michel Desilva states: “It is with great sadness that I report the untimely passing of our colleague and friend, Police Constable Garth Francis. He was in hospital in his home of Dominica when he lost the battle against a protracted illness on Sunday afternoon.

“He was 41, and he is survived by his mother and three children. PC Francis joined the BPS in 2007 as a trained police officer, having served for 15 years in the Dominica Police Force. He worked from Southside Police Station for most of his service in Bermuda and was highly regarded by his colleagues and supervisors.

“A funeral service will be held in Dominica on Saturday 10th November, and a local memorial service is being planned for later in the month. Garth will be sadly missed by colleagues and friends. He will be fondly remembered for his enthusiasm, professionalism and positive attitude at work, but even more so for the strength he showed through courage in the face of difficulty.

“On behalf of the Bermuda Police Service, I offer my deepest sympathies to the family and friends of PC Francis in this time of bereaved loss.”