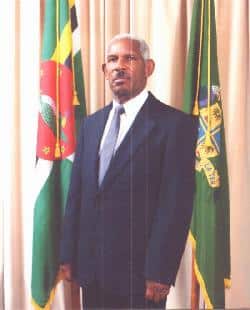 by Administrator
in Those Who Have Left US
2

He passed away at around 3:15 on Monday morning at the Princess Margaret Hospital on Dominica.

Dominica’s fifth president since obtaining Independence in 1978, Vernon Lorden Shaw took his oath of office Tuesday October 06, at the State House. Shaw, was a retired civil servant elected to the post by the House of Assembly on Friday October 2, 1998.

The then Acting Chief Justice of the Eastern Caribbean Supreme Court His Lordship, the Honorable Dennis Byron, sworn Mr. Shaw in as President of Dominica.

During the period 1967 to 1971, he held the office of Permanent Secretary. In 1978, he was appointed Ambassador at large and Inspector of Missions, and since 1973, he has held the office of Chairman on the Public Service Board of Appeal.

Biography: President of Dominica, Resident Tutor UWI, Cabinet Secretary, Permanent Secretary. Born in Roseau on 13 May 1930. Educated at the Roseau Boy’s School, the Dominica Grammar School and Trinity College, University of Oxford, UK. On leaving school entered into a long and distinguished career in the public service beginning as a temporary master at DGS in 1948.

Later that year he moved into the general service, working in several departments during the next nineteen years: Treasury and Customs, Post Office, Central Housing and Planning, Audit and in the Ministry of Trade and Production. During this period he also acted in as Registrar and Deputy Registrar and Principal Secretary in the first years of the ministerial system of government.

When Dominica gained internal self-government as an Associated State of Britain in 1967, Shaw was one of the team of the first Permanent Secretaries, serving initially in the Ministry of Education and Health and later External Affairs before becoming Chief Establishment Officer in 1971. In 1977 he was appointed Secretary to the Cabinet and was reconfirmed in the post on independence on 3 November 1978 as well as being made Ambassador at Large and Inspector of Missions.

He retired from the public service in June 1990. He served for two years (1991-1993) as Resident Tutor of the University of the West Indies School of Continuing Studies, Roseau. He was Chairman of the DBS Board (1993-1995) and of the Public Service Board of Appeal (1993-1998). He was sworn in as the fifth President of the Commonwealth of Dominica on 2 October 1998.

His national awards include the Sisserou Award of Honour, conferred in 1990, and the Dominica Award of Honour, 2001. During the 1960s and 1970s he did courses of further education at Trinity College, Oxford (Development Administration), Queen Elizabeth House, Oxford (Foreign Service) and the Royal Institute of Public Administration (Advanced Public Service Management). He also holds other qualifications in Accounting and Management. He is married to Eudora Shaw (nee Massicott) and they have four children.