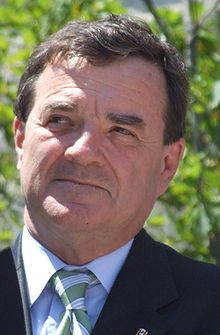 The House of Commons suspended its sitting before question period, as they learned of Flaherty’s death. Opposition MP’s also offered their condolences to Flaherty’s colleagues.

Flaherty is being remembered as an astute politician, and dear friend by officials in all levels of government. Presenting his final budget to the house of commons, Jim Flaherty promised Canadians we were just steps away from balanced books. It was his last major accomplishment before resigning as Finance Minister, one of Canada’s longest serving.

Brad Clark served in Provincial Cabinet with Flaherty and says, “he worked incredibly hard for his family, for the province and for the country.” Clark also says, “he always made time for his kids and wife.”

When he stepped down from cabinet, Flaherty said the decision was the right one for him and his family. He leaves behind his wife, MPP Christine Elliot, and triplet sons.

Across party lines, Flaherty charmed colleagues with a persistent smile, even as he endured health issues. Liberal MP Ralph Goodale said Thursday, “he always had that impish almost leprechaun style of his irish heritage of which he was so proud.”

His signature green tie was a nod to his roots, and perhaps the good luck charm that allowed him a rare blend of success, both personal and political.

Premier Kathleen said said, “He helped steer Canada out of the worst of the recession… On behalf Ontarians, I want to express my gratitude for his service to Ontario and to Canada.

The last tweet sent from Jim Flaherty’s account was posted on March 18th, the day he announced his resignation. It said, “It’s been an honour to serve Canada. Thank you for the opportunity.”

In his farewell statement as Finance Minister, it’s no wonder Jim Flarherty highlighted one of his greatest political accomplishments. He wrote, “there is no doubt that Canada’s budget will be balanced in 2015. Canada’s fiscal position is the envy of the developed world. All canadians can be proud of the country’s performance.”