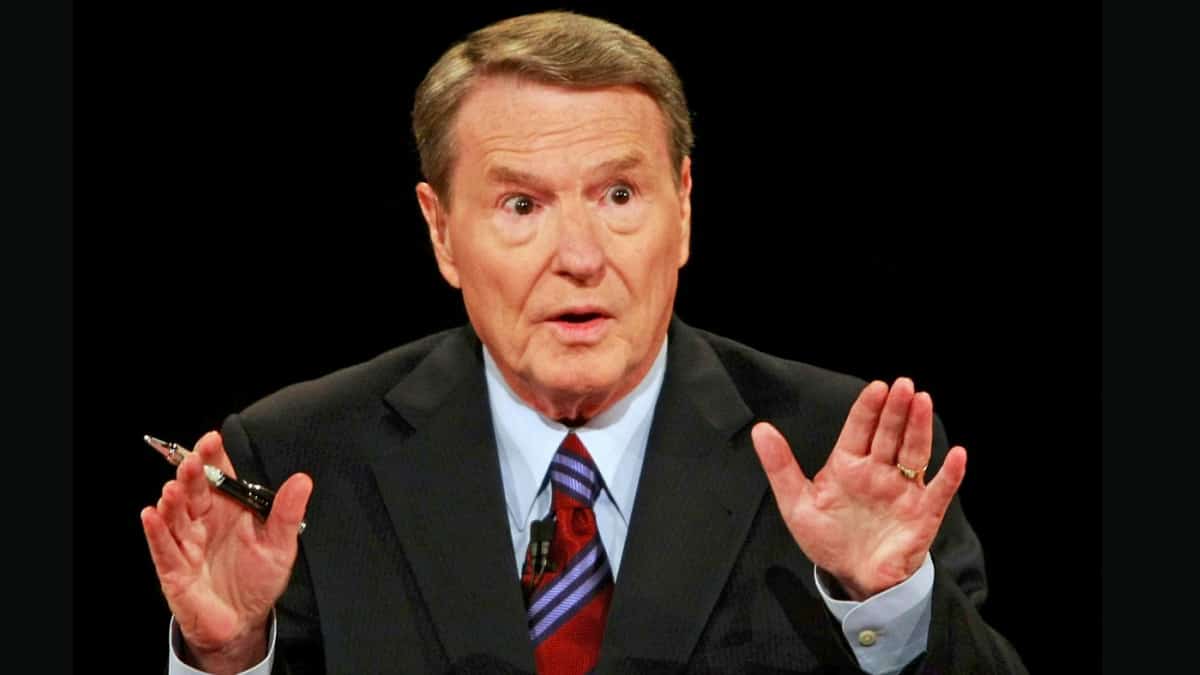 by News Contributor
in Those Who Have Left US, Who Important Died Today
0

While best known for his anchor work, which he shared for two decades with his colleague Robert MacNeil, Mr. Lehrer moderated a dozen presidential debates. He was the author of more than a score of novels, which often drew on his reporting experiences. He also wrote four plays and three memoirs.

A low-key, courtly Texan who worked on Dallas newspapers in the 1960s and began his PBS career in the 1970s, Mr. Lehrer saw himself as “a print/word person at heart” and his program as a kind of newspaper for television, with high regard for balanced and objective reporting. He was an oasis of civility in a news media that thrived on exciting headlines, gotcha questions, and noisy confrontations.

“I have an old-fashioned view that news is not a commodity,” Mr. Lehrer told The American Journalism Review in 2001. Information is news required “in a democratic society, and Thomas Jefferson said democracy is dependent on an informed citizenry. That sounds corny, but I don’t care whether it sounds corny or not. It’s the truth.”

Mr. Lehrer co-anchored a single-topic, half-hour PBS news program with Mr. MacNeil from its inception in 1975 to 1983, when expanded into the multitopic “MacNeil/Lehrer NewsHour.” It ran until Mr. MacNeil retired in 1995. The renamed “NewsHour With Jim Lehrer” continued until 2009 when he reduced his appearances to two and then to once a week until his retirement in 2011.

Critics called Mr. Lehrer’s reporting and his collaborations with Mr. MacNeil, trustworthy journalism, committed to fair, unbiased, and far more detailed reporting than the C.B.S., N.B.C. or A.B.C. nightly news programs. To put the news in perspective, the two anchors interviewed world and national leaders, and experts on politics, law, business, arts, and sciences, and other fields.

It was not unusual to see presidents, prime ministers, congressional and corporate leaders, and other luminaries interviewed on “MacNeil/Lehrer.” Early subjects included the Shah of Iran, Ayatollah Ruhollah Khomeini, and Presidents Anwar Sadat of Egypt and Fidel Castro of Cuba. Mr. Lehrer also interviewed nearly all of America’s presidential and vice-presidential candidates from 1976 on.

With Mr. Jim Lehrer reporting from Washington and Mr. MacNeil from New York, the program sought to represent all sides of controversy by eliciting comments from rivals for public attention. But the anchors deliberately drew no sweeping conclusions of their own about disputed matters, allowing viewers to decide for themselves what to believe.

The approach had its drawbacks. An extended presentation of authoritative voices offering conflicting viewpoints left some viewers dissatisfied, if not confused. Many found the technique elitist and dull, and even some critics called it boring — or, worse, a willful refusal by Mr. Lehrer and Mr. MacNeil to make hard judgments about adversarial issues affecting the public interest.

In The Columbia Journalism Review in 1979, Andrew Kopkind wrote: “The structure of any MacNeil/Lehrer Report is composed of talking heads rather than explosive images, of conversation covering several points of view rather than a homogeneous statement of the worlds. Also, he said, “condition, of panels of experts, proposals for policy, and the sense of incompleteness — and therefore of possibility — rather than a feeling of finality.”

Edwin Diamond, writing in The New York Times that year, said the hosts had “gradually created one of the best half-hours of news on television without ‘visuals’ at all; the major elements of the program are the interviewers themselves, always prepared with right questions. Also, the quality of their guests, still specialists on the night’s single topic and almost always capable of speaking fresh, intelligent thoughts.”

“MacNeil/Lehrer” audiences were small compared to the network news shows, which drew far more viewers with videotaped coverage and news summaries that critics called headlines for people who did not read daily newspapers. But surveys found that PBS viewers were better educated and that they were newspaper readers who tuned in to amplify what they knew.

Mr. Lehrer and Mr. MacNeil each declined lucrative job offers from television networks. Unlike commercial systems, “MacNeil/Lehrer” relied on donations by corporations, foundations, and wealthy individuals; by the Corporation for Public Broadcasting, a nonprofit creation of Congress; and by MacNeil/Lehrer Productions, created in 1981 to support their franchise, specials, and documentaries.

In 1986, Mr. Jim Lehrer hosted the documentary “My Heart, Your Heart,” which based on his experience of double-bypass surgery and recovery in 1983. The program, on PBS, won an Emmy and an award from the American Heart Association. He also hosted “The Heart of the Dragon,” a 12-part series on modern China, also shown in 1986.

Known mainly to PBS viewers, Mr. Lehrer became one of television’s most familiar faces by moderating presidential debates, starting in 1988 with the first between Vice President George H.W. Bush and Gov. Michael S. Dukakis of Massachusetts. Lehrer continued interviews in every presidential campaign through 2012, sometimes including two or three debates in a year.

Complaints by candidates and pundits about moderators’ performances became a tradition of election seasons. And Mr. Lehrer, often called the “Dean of Moderators” for his many appearances, was singled out repeatedly, accused of being too easygoing or too strict in enforcing the rules, of being too soft or too hard on the debaters. In 1988, when critics said he was not aggressive enough with the candidates, Mr. Jim Lehrer snapped, “If entertainment is somebody’s need, they ought to go to the circus.” he pointed out. In 2008, some commentators pointed out he was too aggressive in trying to get Senator John McCain of Arizona and Senator Barack Obama of Illinois to engage with each other.

In the 2012 debate, it was Mr. Lehrer’s light touch that came under fire. President Obama and former Gov. Mitt Romney of Massachusetts at times ignored Mr. Lehrer, who strained to interrupt when they exceeded their allotted speaking times, and repeatedly the rules they were violated. Both campaigns accused Mr. Lehrer of losing control of the debate.

The Commission on Presidential Debates defended Mr. Lehrer, saying it was his job to get the candidates talking, not to insert himself into their dialogue. For his part, Mr. Lehrer said his task had been “to facilitate direct, extended exchanges between the candidates about issues of substance” and “to stay out of the way of the flow,” adding, “I had no problems with doing so.”

James Charles Lehrer was born in Wichita, Kan., on May 19, 1934, to Harry Lehrer, who ran a small bus line and was a bus station manager, and Lois (Chapman) Lehrer, a teacher. Jim attended schools in Wichita and Beaumont, Tex., and graduated from Thomas Jefferson High School in San Antonio, where he edited a student newspaper.

He earned an associate degree from Victoria College in Texas in 1954 and a bachelor’s degree in journalism from the University of Missouri in 1956. Like his father and his older brother Fred, he joined the Marine Corps. He was an infantry officer on Okinawa, edited a camp newspaper at the Parris Island Marine training center in South Carolina, who g discharged as a captain in 1959.

In 1960, he married Kate Staples, a novelist. She survives him, along with three daughters, Jamie, Lucy and Amanda, and six grandchildren.

From 1959 to 1961, Mr. Jim Lehrer was a reporter for The Dallas Morning News. Still, he quit after the paper declined to publish his articles on right-wing activities in a civil defense organization. Mr. Lehrer joined the rival Dallas Times Herald, where over nine years Luhrer was a reporter, columnist and city editor. He also began writing fiction. His first novel, “Viva Max!” (1966), about a Mexican general who triggers an international incident by trying to recapture the Alamo, was made into a film comedy starring Peter Ustinov and Jonathan Winters.

In 1970, Mr. Lehrer joined KERA-TV, the Dallas public broadcasting station, where he delivered a nightly newscast. In 1972, he became PBS’s coordinator of public affairs programming in Washington. He quit over funding cuts, but in 1973 he joined WETA-TV in Washington, became a PBS correspondent, and met Mr. MacNeil, a Canadian who had reported for NBC-TV and the B.B.C.

They co-anchored PBS telecasts of the Senate Watergate hearings, investigating the break-in by Republican operatives at the Democratic National Committee headquarters, an episode that set off a political dirty-tricks scandal that led to the downfall of Richard M. Nixon’s presidency. The telecasts began the partnership that would carry the two broadcasters to television fame.

Mr. Lehrer won numerous Emmys, a George Foster Peabody Award, and a National Humanities Medal. He and Mr. MacNeil got inducted into the Academy of Television Arts and Sciences Hall of Fame in 1999.

He lived in Washington and had a farm in West Virginia, where he kept a 1946 Flxible Clipper bus, the centerpiece of his collection of bus memorabilia.

Writing nights and weekends, on trains, planes and sometimes in the office, Mr. Lehrer churned out a novel almost every year for more than two decades: spy thrillers, political satires, murder mysteries and series featuring One-Eyed Mack, a lieutenant governor of Oklahoma, and Charlie Henderson, a C.I.A. agent. “Top Down” (2013) revolved around the 1963 assassination of President John F. Kennedy, which Mr. Lehrer had covered as a young reporter in Dallas. Critics called his fiction skillful, relying more on twisty plots than characters and dialogue.

“His apprenticeship came at a time when every reporter, it seemed, had an unfinished novel in his desk — but Lehrer finished him,” Texas Monthly said in a 1995 profile. Mr. Lehrer will be remembered best as a newsman. “Jim Lehrer is no showboat,” Walter Goodman wrote in The Times in 1996. “That is a considerable distinction for television, where the interrogators are often more significant than their guests or victims. This man of modest mien keeps the spotlight on the person being questioned. His somewhat halting conversational manner invites rather than commands.

And his professional principles dispel any fears that he is out to get not just his guests’ point of view but also the guests themselves.”