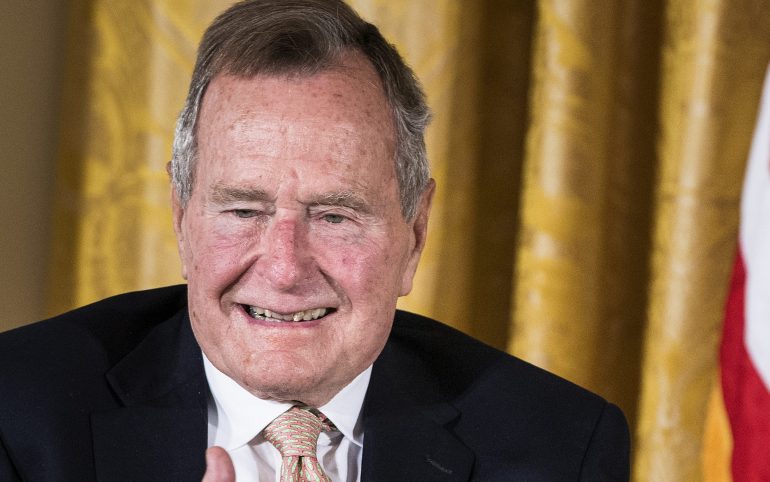 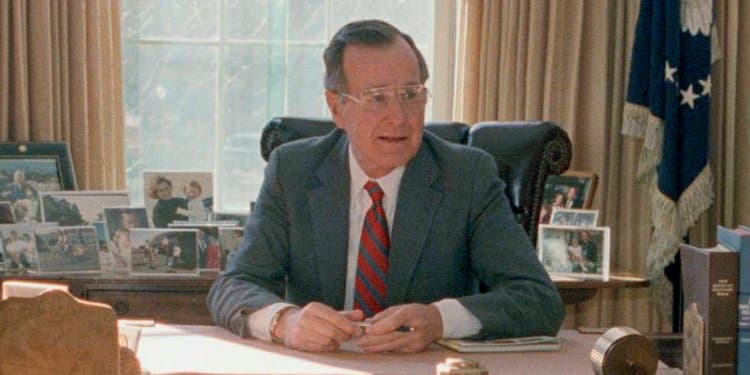 94-year-old George HW Bush, who as the 41st president shepherded the US through a turbulent period in global relations that included the breakup of the Soviet Union and the Iraqi invasion of Kuwait, has died. He was 94.

“He was 94 and is survived by his five children and their spouses, 17 grandchildren, eight great-grandchildren, and two siblings. He was preceded in death by his wife of 73 years, Barbara; his second child Pauline Robinson ‘Robin’ Bush; and his brothers Prescott and William or ‘Bucky’ Bush. Funeral arrangements will be announced as soon as is practical.”

His son George W Bush, the 43rd president, stated on behalf of his family: “Jeb, Neil, Marvin, Doro and I are saddened to announce that after 94 remarkable years, our dear Dad has died. George HW Bush was a man of the highest character and the best dad a son or daughter could ask to have.

“The entire Bush family is deeply grateful for 41’s life and love, for the compassion of those who have cared and prayed for Dad, and the condolences of our friends and fellow citizens.”

A statement from Donald Trump praised Bush for his “sound judgment, common sense and unflappable leadership.” White House press secretary Sarah Sanders later said Wednesday 5 December would be a national day of mourning, ahead of a state funeral which Trump and his wife Melania would attend. In Argentina for the G20 summit, Trump canceled a planned press conference “out of respect for the Bush family.”

A moderate conservative who served a single term between 1989 and 1993, Bush lacked the charisma or polarising ideology of his predecessor, Ronald Reagan, under whom he served as vice-president.

But he was widely respected for showing a steady hand during an uncertain moment in history during which the Berlin Wall came down, Soviet-sponsored communism in Eastern Europe collapsed, and the US emerged as the single global superpower.

Bush will inevitably be remembered too as the patriarch of one of the most successful political dynasties in America. The 41st president was also father Jeb Bush, who ran against Trump for the Republican nomination in 2016.

The two brothers, former governors of Texas and Florida respectively, were among six children the 41st president had with his wife, Barbara, who died in April aged 92. A close-knit family, they watched George Bush Sr’s health deteriorate. Bush had vascular Parkinson’s disease, which causes a loss of balance and had used a wheelchair since at least 2012.

Admission to a hospital in Houston, Texas in November 2012, following a problem with a bronchitis-related cough, resulted in a two-month stay, including a brief period in intensive care. Bush spent another week in hospital two years later. He was in the hospital again with a blood infection the day after his wife’s funeral.

Nonetheless, Bush remained active well into his old age. He celebrated at least three of his birthdays since his retirement from the White House with parachute jumps – including, in June 2014, a skydive to celebrate his 90th birthday.

In 2017, he was forced to apologize after being accused of sexual assault. His spokesman, Jim McGrath, admitted the former president had “patted women’s rears” to help “put people at ease” during photo calls. “To anyone he has offended, President Bush apologizes most sincerely,” McGrath said.

Over a two-decade period, Bush served as ambassador to the United Nations, envoy to China, chairman of the Republican National Committee at the height of the Watergate scandal, director of the CIA and vice-president. It was a professional grounding that has led some to argue he was the best-prepared president in US history. He was put to the test, as diplomat and statesman, by the collapse of the Soviet Union.

It was a challenge to which he was perhaps uniquely suited; his close relationship with Mikhail Gorbachev helped maintain global stability during the dissolution of the USSR.

In January 1991, Bush launched a US-led action in the Persian Gulf to counter Saddam Hussein’s invasion of Kuwait. The swift military offensive, which defeated Saddam’s forces, stands in contrast to his son’s protracted war in Iraq, an eight-year engagement widely considered to be a major foreign policy blunder.

While Bush Sr earned credit for his approach to foreign policy, he was less successful on the domestic front and lost the 1992 presidential race to Bill Clinton. His defeat was in part due to the argument he had poorly performed as steward of the economy during a period in which unemployment grew.

Indeed, Bush’s best-remembered line is likely to be a pledge he delivered as vice-president at the 1988 Republican National Convention: “Read my lips,” he told delegates. “No new taxes.”

Bush’s tax pledge roused conservatives, but it turned out to be notoriously misjudged. Once in office, facing a deficit that had quietly ballooned under his predecessor, and a Congress controlled by Democrats, the 41st president was forced to renege on his promise.

Bush did leave two significant legislative marks: the Clean Air Act Amendments, signed into law in 1990, and the Americans with Disabilities Act, which Bush made law in the same year.

The former president Barack Obama and his wife, Michelle, issued a statement marking Bush’s death. It said: “America has lost a patriot and humble servant in George Herbert Walker Bush.

“While our hearts are heavy today, they are also filled with gratitude. Not merely for the years he spent as our 41st president, but for the more than 70 years he spent in devoted service to the country he loved – from a decorated naval aviator who nearly gave his life in world war two, to commander-in-chief of our armed forces, with plenty of posts along the way.”

A scion of the Bush family, he was born in Milton, Massachusetts to Prescott Bush and Dorothy Walker Bush. Following the attack on Pearl Harbor on December 7, 1941, Bush postponed his university studies, enlisted in the United States Navy on his 18th birthday, and became the youngest aviator in the U.S. Navy at the time.

He served until September 1945, then attended Yale University. Graduating in 1948, he moved his family to West Texas, where he entered the oil business and became a millionaire by the age of 40 in 1964. Soon after founding his own oil company, Bush became involved in politics.

He was defeated in his first election, for the U.S. Senate in 1964 but won election to the House of Representatives from Texas’ 7th district in 1966. He was re-elected in 1968 but was defeated for election to the Senate again in 1970. In 1971, President Richard Nixon appointed George HW Bush as Ambassador to the United Nations, and in 1973, Bush became the Chairman of the Republican National Committee.

The following year, President Gerald Ford appointed Bush as the ambassador to China and later reassigned Bush to the position of Director of Central Intelligence. Bush ran for president in 1980 but was defeated in the Republican primary by Ronald Reagan. Reagan chose Bush as his running mate, and Bush became vice president after the Reagan–Bush ticket won the 1980 election. During his eight-year tenure as vice president, George HW Bush headed administration task forces on deregulation and fighting the War on Drugs.