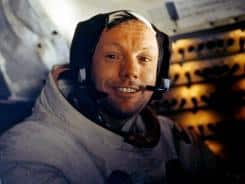 by Administrator
in Those Who Have Left US
1

Astronaut Neil Armstrong, who uttered one of history’s most famous proclamations when he became the first man to walk on the moon in 1969, died Saturday.

Armstrong was commander of the Apollo 11 mission that made the first manned lunar landing on July 20, 1969. He had undergone heart surgery Aug. 8, three days after his 82nd birthday. His family said that Armstrong had died from post-surgery complications.

“We are heartbroken to share the news that Neil Armstrong has passed away following complications resulting from cardiovascular procedures,” the family said in a statement. “Neil was our loving husband, father, grandfather, brother and friend.”

As he stepped off the lunar module and set foot on the moon’s surface, he said “that’s one small step for man, one giant leap for mankind,” underscoring a centuries-old fantasy among humankind and a high point in the Cold War era space race between the U.S. and the Soviet Union. An estimated 600 million TV viewers watched the event, engrossed by the surreal, grainy black-and-white footage.

Saturday, President Obama hailed Armstrong as one of “the greatest American heroes — not just of his time, but of all time.”

“When he and his fellow crewmembers lifted off aboard Apollo 11 in 1969, they carried with them the aspirations of an entire nation,” the president said in a statement. “They set out to show the world that the American spirit can see beyond what seems unimaginable — that with enough drive and ingenuity, anything is possible. And when Neil stepped foot on the surface of the moon for the first time, he delivered a moment of human achievement that will never be forgotten.”

But the notoriously publicity shy Armstrong was a reluctant hero. In an era of celebrity adulation, Armstrong refused to sign autographs or grant interviews, giving only infrequent speeches. “I don’t want a living memorial,” he once said. He reluctantly joined fellow Apollo 11 astronauts Buzz Aldrin and Michael Collins in anniversary celebrations of the moon landing.

“He was the best, and I will miss him terribly,” Collins said.

Armstrong flew Navy fighter jets during the Korean War, flying nearly 80 missions. During one flight over North Korea in 1951, the right wing of his jet clipped a cable wire. He managed to fly to friendly territory before ejecting. Armstrong later became a test pilot before joining the National Aeronautics and Space Administration as part of its second group of astronauts.

Armstrong commanded Gemini 8 in 1966, which suffered near disaster until he used a back-up system to stop an uncontrolled capsule spin and made an emergency landing in the Pacific Ocean.

Armstrong’s prowess was again demonstrated during the moon landing, when it was later revealed that lunar module had just 20 seconds of fuel left when he steered to avoid large boulders before touching down in the Sea of Tranquility.

“I am, and ever will be, a white socks, pocket protector, nerdy engineer,” he said a February 2000 appearance. “And I take a substantial amount of pride in the accomplishments of my profession.”

Born in tiny Wapakoneta, Ohio, Armstrong took his first flight as a 6-year-old, fueling a lifetime passion for aviation. He attended Purdue University to study aeronautical engineering before the Korean War, later earning a master’s degree at the University of Southern California.

The lunar landing made him more popular than his hero, aviator Charles Lindbergh, but Armstrong shunned the spotlight. After walking on the moon, he lived a mostly private life, buying a farm and teaching aerospace engineering at the University of Cincinnati until 1979.

When he appeared in Dayton in 2003 to help celebrate the 100th anniversary of powered flight, he bounded onto a stage before 10,000 people packed into a baseball stadium. But he spoke for only a few seconds, did not mention the moon and quickly ducked the spotlight.

Still, he expressed his concerned about Obama’s 2010 space policy shift that emphasized the privatization of space travel. Armstrong said he had concerns about the plan to end manned NASA flights, which he called “misguided.”

“Neil Armstrong was a pioneer of flight and that is how he would want to be remembered,” says space historian John Logsdon, author of John F. Kennedy and the Race to the Moon. “In his mind he flew all kinds of vehicles that set record firsts, and one of them happened to be the first one on the moon.”

Armstrong basically saw himself as an aviator first and foremost, part of the long tradition of American pilots going back to the Wright Brothers, Logsdon says.

“For those who may ask what they can do to honor Neil, we have a simple request,” his family said in a Saturday statement. “Honor his example of service, accomplishment and modesty, and the next time you walk outside on a clear night and see the moon smiling down at you, think of Neil Armstrong and give him a wink.”

“He will be part of history forever,” Logsdon said.