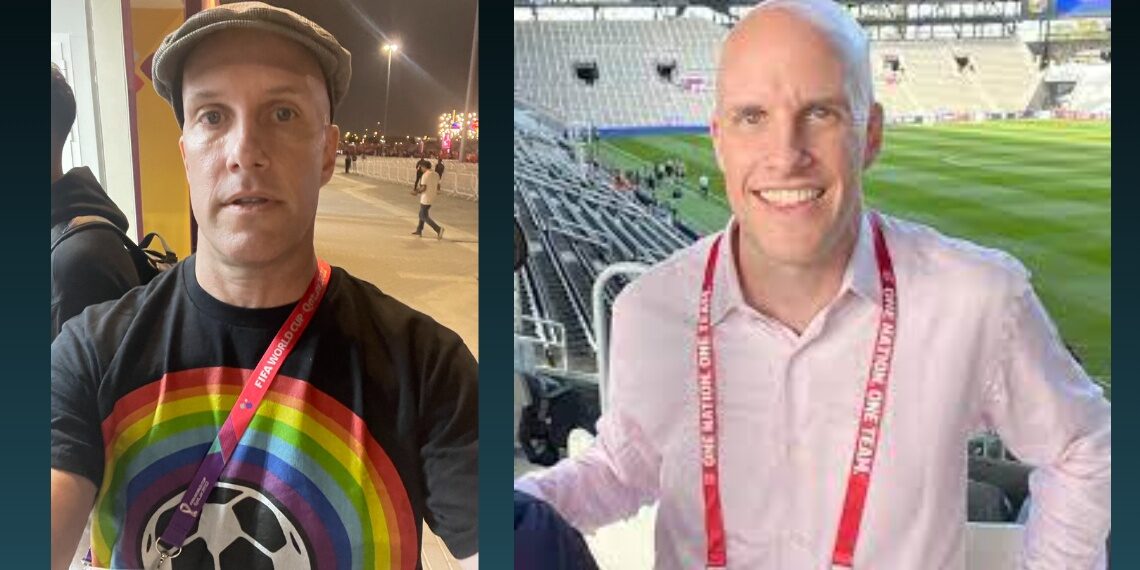 As the match was winding down, NPR correspondent Tom Goldman witnessed a commotion in the press tribune at Lusail Stadium. Reporters scattered as Wahl collapsed. Paramedics responded to the seating area where he was and performed CPR. After many minutes, they took him away on a stretcher while using an automatic chest compressor to continue applying CPR.

Wahl’s wife and brother both confirmed his death to NPR.

Grant Wahl often appeared on NPR discussing the intricacies of soccer and his love of the game.

As NPR reported earlier, Wahl was prevented from entering one World Cup stadium in Qatar in November because he wore a rainbow t-shirt.

Wahl said a stadium security guard turned him away, “You have to change your shirt. It’s not allowed.” Wahl said he’d been briefly detained. Qatar has been a controversial host since it was awarded the tournament in 2010.

Its human rights record has been heavily criticized. And, since the tournament began last month, the Persian Gulf country’s rules prohibiting same-sex relations have been front and center. It’s illegal in Qatar and punishable by jail time. When several European team captains said they would wear special rainbow armbands, FIFA clamped down and threatened the players with yellow cards.

Eric Wahl said his brother had received death threats while in Qatar because of the rainbow shirt and his continued reporting on FIFA and the Qatari government.

U.S. Soccer noted Wahl’s death in a tweet, saying the organization was heartbroken. “Grant’s passion for soccer and commitment to elevating its profile across our sporting landscape played a major role in helping to drive interest in and respect for our beautiful game.”

Wahl was a longtime sportswriter with Sports Illustrated – travelling the globe covering soccer events like the World Cup, Women’s World Cup and numerous European tourneys. He and the magazine parted ways in 2020, and he branched out on his own. He also regularly appeared on Fox Sports and CBS Sports as a commentator.

Grant Wahl had gotten sick while on assignment in Qatar. On Monday, he had written that he’d visited a medical clinic, and the staff believed he had bronchitis.

“My body finally broke down on me,” Wahl wrote. “Three weeks of little sleep, high stress and lots of work can do that to you … What had been a cold over the last ten days turned into something more severe on the night of the USA-Netherlands game, and I could feel my upper chest take on a new level of pressure and discomfort.” He said he’d been taking antibiotics, which appeared to be helping.

June Blair, ‘Adventures of Ozzie and Harriet’ Actress, Dies at 90