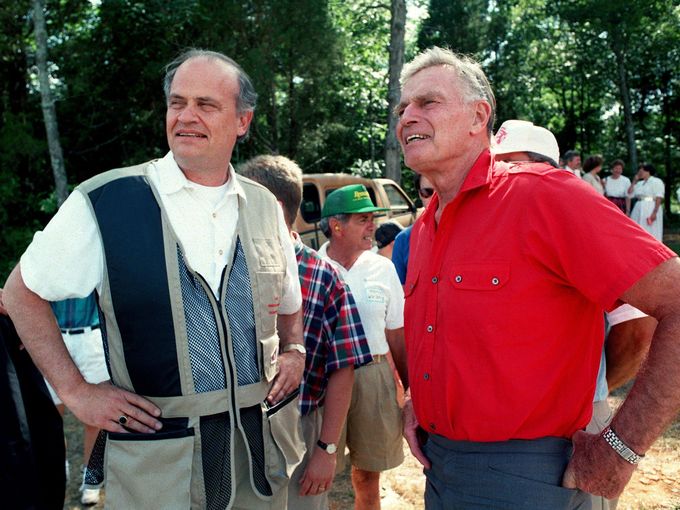 by News Contributor
in Those Who Have Left US
1

Fred Thompson, 73, died on Sunday from after a recurrence of lymphoma, according to a statement issued by his family. Thompson, who had recently purchased a house in Nashville to return to Tennessee, was first diagnosed with cancer in 2004.

Fred Thompson, a former U.S. senator from Tennessee, GOP presidential candidate, Watergate attorney and actor who starred on the television drama “Law and Order,” died on Sunday in Nashville.

Mr. Thompson died after a recurrence of lymphoma, according to a prepared statement issued by the Thompson family. Mr Thompson, who had recently purchased a house in Nashville to return to Tennessee, was first diagnosed with cancer in 2004.

“It is with a heavy heart and a deep sense of grief that we share the passing of our brother, husband, father, and grandfather who died peacefully in Nashville surrounded by his family,” the Thompson family’s statement reads.

“Fred once said that the experiences he had growing up in small-town Tennessee formed the prism through which he viewed the world and shaped the way he dealt with life,” his family said. “Fred stood on principle and common sense, and had a deep love for and connection with the people across Tennessee whom he had the privilege to serve in the United States Senate. He enjoyed a hearty laugh, a strong handshake, a good cigar, and a healthy dose of humility. Fred was the same man on the floor of the Senate, the movie studio, or the town square of Lawrenceburg, his home.”

Standing at least 6 feet, 5 inches with a booming voice, Mr. Thompson and his larger-than-life persona played a role in several key moments that shaped the U.S. and Tennessee political landscape.

As an attorney, he helped lead to the resignation of President Richard Nixon. As an actor, he starred in some of the most prominent films and television series of his time. And as a politician, he served the state of Tennessee in the U.S. Senate from 1994 to 2003, before making a brief run for the Republican presidential nomination in 2008.

“Today Tennessee lost a talented and admired statesman and many of us lost a beloved friend,” said former U.S. Senate Majority Leader Bill Frist, whose Senate term overlapped with Mr. Thompson’s time in Washington. “Working at his side in the Senate for eight years, Fred embodied what has always been the best of Tennessee politics — he listened carefully and was happy to work across the aisle for causes that he believed were right.”

Mr. Thompson was elected in Tennessee as a Republican in 1994 to fill the unexpired term of Al Gore, who had became vice president two years earlier. On the campaign trail, Mr. Thompson famously crisscrossed the state in a rented red pickup truck before soundly defeating Democrat Jim Cooper — currently Nashville’s congressman — in what was a dominant election year for Republicans nationally.

In a prepared statement, Gore said he was saddened to learn of Mr. Thompson’s death.

“His longtime dedication to public service helped millions of people around the country and here, in our home state,” Gore said.

“Tennessee has lost a great statesman and one of her favorite sons,” Haslam said. “Crissy and I have always appreciated his friendship, and we will miss him.”

U.S. Sen. Bob Corker, R-Tenn., called Mr. Thompson’s personality “infectious” and said he had a way of making all of those around him strive to be better.

“Fred never forgot where he came from, and our state and country miss his common-sense approach to public service,” Corker said. “I greatly appreciated his friendship and am saddened to learn of his passing.”

Democrats, including former Rep. Bob Clement, D-Nashville, remembered Mr. Thompson as someone who put aside partisanship to solve problems. Clement, a personal friend of Mr. Thompson who briefly attended elementary school with him in Nashville, said Mr. Thompson could “absolutely take over a room” with his physical presence, personality and charm.

“He was a good-ol’-boy from Lawrence County with a lot of talent and a lot of gifts,” Clement said.

US Sen. Fred Thompson Narrates a Tribute to President Ronald Reagan on his 100th Birthday

Nathaniel Marston Died at 40 He: ‘One Life To Live’ Actor.