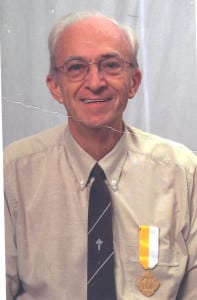 Brother McNiven, 79, died at the Princess Margaret Hospital in Roseau, Dominica, on February 21 after a short period of illness.

As a religious brother and missionary who committed his life to service in education, McNiven, originally from Newfoundland, Canada, came to the Caribbean in the 1980s to work as principal of SJA.

Current SJA principal Rudolph Davis remembered him as being very professional, strict and organised. However, he said Brother McNiven was also very outreaching in his approach.

“He was very sympathetic, generous in his approach to the people. And he had a class about him,” he said.

“He was into fine arts and culture. He always wanted the academy to be in very cultural things. He promoted Vitus (Mas’ Troupe), Carnival and calypso.”

During his tenure as principal of St Joseph’s, McNiven left Antigua to take up a post at a school in St Kitts. After a short time there, he returned to SJA for his second time as principal.

In all, Brother McNiven would have served SJA and the nation for about 18 years. When the Catholic Brothers ended their tenure in Antigua in 2002, he left to continue his ministry in Dominica and later Grenada.

During the McNiven administration of St Joseph’s Academy, the Father Albert Rutten Hall was built, which housed the science labs. Father Albert was the Redemptorist priest who worked with the school’s committee to prepare for the arrival of the Christian Brothers in January 1958.

In January 2011, a second floor, added to the Albert Rutten Hall, was dedicated as the Brother McNiven Wing.

During the opening ceremony, the keynote address was given by Director of Education Officer Jacintha Pringle, who had known McNiven during the two terms he served as principal of SJA.

She lauded him for his work with the Catholic Teachers’ Association of Antigua and for his co-operation with and support of the Ministry of Education. She noted that it was important for Brother McNiven to be given “his flowers” while he was able to appreciate them.

Born March 17, 1934, Brother McNiven would have celebrated his 80th birthday next month.