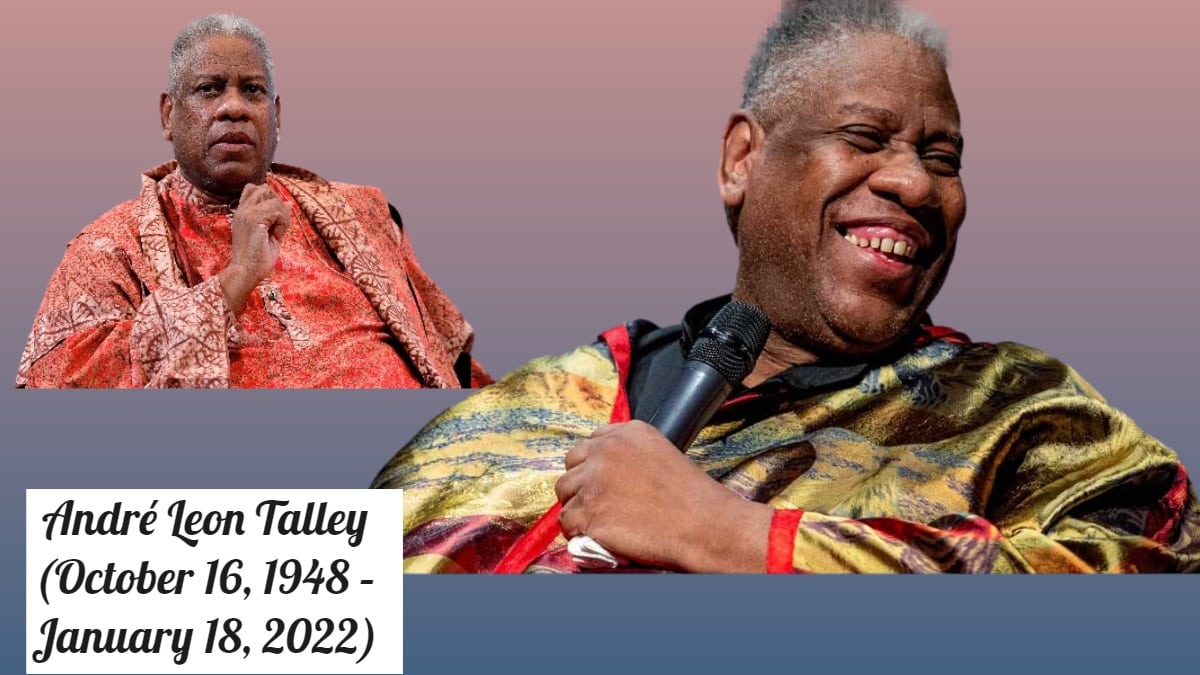 ET can confirm that Andre Leon Talley, a legendary fashion journalist who helped shape Vogue during his decades-long association with the magazine, died at age 73 on January 18, 2022.

The news of the fashion icon’s death first broke on TMZ. Officials did not reveal the cause of death. Talley passed away while hospitalized in White Plains, New York.

“Talley was instrumental to Vogue’s vision, and direction in the ’80s and ’90s, when he worked his way up the magazine ranks to eventually become the news director — which he helmed from ’83 to ’87 — and then ascended to Vogue’s creative director in ’88,” wrote TMZ.

After more than a decade as editor-at-large, Talley parted ways with Vogue in 2018. Reports at the time stated that the fallout with editor-in-chief Anna Wintour; he described their relationship as “an iceberg” in his 2020 autobiography, The Chiffon Trenches, writing that Wintour is “not capable of simple human kindness.”

Talley cut an imposing figure in the fashion scene due to his height (six-foot-seven), his penchant for colorful caftans, and his sheer flamboyance. He also advised the Obamas on fashion, introducing Michelle Obama to designer Jason Wu, who created her inaugural gown.

As Talley declared in an interview with the Irish Times, “I scorched the earth with my talent, and I let my light shine.”

Tributes have been pouring in for the star, with Tyra Banks saying in a statement to ET: “I adored Andre. Before meeting him, I had never experienced such a prolific person serving up a rare mix of fashion ‘fabulousness’ and real down-home southern comfort love. Being in his presence was so magical. He made me smile laugh and was a masterful teacher – a genius historian.

“Scholar, colleague, effervescent spirit, legend… you are resting now, Dearest Andre. But your spirit, your je ne sais quoi, your iconic voice. I hear it now. And will forever. We all will.”

André Leon Talley was born on October 16, 1948. He was the Vogue magazine fashion news director from 1983 to 1987. Talley was also the first African-American male creative director from 1988 to 1995 and its editor-at-large from 1998 to 2013. Talley also served on America’s Next Top Model (from Cycle 14 to Cycle 17). The fashion icon was often known for supporting emerging designers and advocating for diversity in the fashion industry. The capes, caftans, and robes he wore became his trademark look.

Talley was the editor-at-large of Numéro Russia in 2013, before resigning due to anti-LGBT laws in Russia. He also authored three books, including the memoir The Chiffon Trenches, which landed on The New York Times Best Seller list and co-authored a book with Richard Bernstein. Andre Leon Talley additionally worked stints with Andy Warhol at Interview Magazine, Women’s Wear Daily, W, and The New York Times. He once served as a stylist for United States President Barack Obama and First Lady Michelle Obama during their White House. He styled Melania Trump for her 2005 wedding to Donald Trump.

In 2020, France awarded him the Chevalier de l’ordre des Arts et des Lettres honor for arts and letters; and the following year, he received the North Carolina Award for his role in literature. He was featured in The First Monday in May and The September Issue. He was the subject of the documentary, The Gospel According to André, directed by Kate Novack. In the 2006 film The Devil Wears Prada, the character Nigel Kipling portrayed by Stanley Tucci is widely believed to depict Talley.