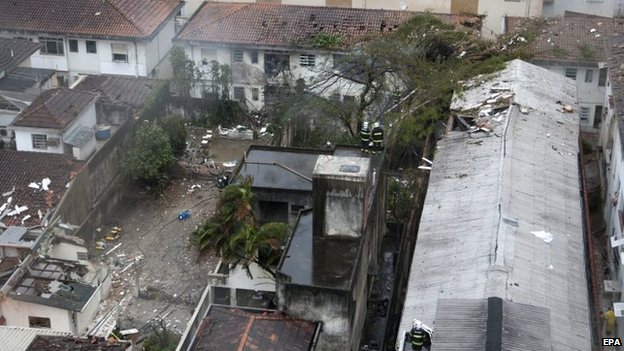 The plane carrying Mr Campos came down in bad weather in a residential area of the port city of Santos, in Sao Paulo state.

Four other passengers and the two pilots were also killed.

“The whole of Brazil is in mourning,” Ms Rousseff said in a statement.

Ms Rousseff’s Vice-President, Michel Temer, also expressed regret over the death of Mr Campos, who had been running third in opinion polls for October’s election.

He said there were “no words to describe the tragedy that has befallen Brazilian politics today”.

“Eduardo Campos was a politician with principles and values passed down through his family and carried with dignity and honour throughout his career in parliament and the executive,” he added in a statement

The BBC’s Wyre Davies in Rio de Janeiro says Brazil has been rocked by the news.

Brazilian television broadcast a continuous loop of images of the wreckage, a smouldering pit between buildings of several storeys.

A married father of five children, he served two terms as governor of the north-eastern Pernambuco state.

For the moment Brazil is still absorbing the shock of the sudden death of a charismatic presidential candidate, who while third in the polls, had the potential to have a bigger impact in October’s election than this might have suggested.

The night before his death, Eduardo Campos appeared live on the country’s main TV news programme, Jornal Nacional. He gave a poised and confident performance as he was quizzed by two presenters.

Analysts say Brazilian political life will be the poorer for the loss of a politician who, along with his running mate Marina Silva, aimed to offer a third way between the governing Workers’ Party (PT) and their traditional opponents, the Brazilian Social Democracy Party (PSDB).

And if he might not have reached the final round of voting in the 2014 election, he was certainly seen as a promising candidate for the future.

Eduardo Campos leaves a big gap in Brazilian politics and many questions about what the impact of his tragic death will be, but for the moment the consensus among both friends and opponents is to show solidarity with his young family and respect for his record.

His vice-presidential candidate, Marina Silva, a popular politician and a former government minister, was reportedly meant to have been on the plane with him but decided not to travel.

“I learned to respect him, admire him and trust his attitudes and his ideals in life,” Ms Silva told reporters in Santos.

“Eduardo was dedicated to these ideals until the last seconds of his life. (…) He was full of joy, dreams, commitments,” the prominent politician said.

The United States said it was “deeply saddened” by the news, calling it a “tragic occasion”.

According to air force officials, air traffic control lost contact with the plane after it was unable to land at Guaruja.

It plunged into several houses in a densely-populated neighbourhood, sending plumes of smoke into the air.

Local residents said the sky was cloudy and it was raining at the time of the crash.

All seven people aboard the plane, including a campaign photographer and cameraman, a press adviser, as well as two pilots, died in the crash, City Hall press officer Patricia Fagueiro told the Associated Press news agency.

The Brazilian Air Force reported the plane was a Cessna 560XL.

Bishop Daniel Has Passed On