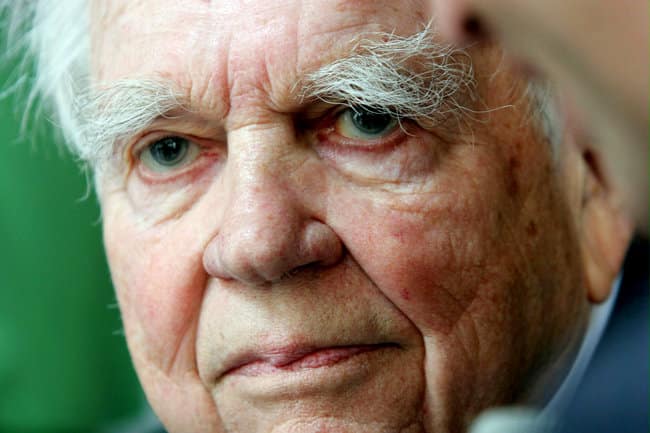 Andy Rooney, a Cranky Voice of CBS, Dies at 92

Andy Rooney, whose prickly wit was long a mainstay of CBS News and whose homespun commentary on “60 Minutes,” delivered every week from 1978 until 2011, made him a household name, died on Friday in New York City.

He was 92 and lived in Manhattan, though he kept a family vacation home in Rensselaerville, N.Y., and the first home he ever bought, in Rowayton, Conn.

In late September, CBS announced that Mr. Rooney would be making his last regular weekly appearance on “60 Minutes” on Oct. 2. After that, said Jeff Fager, the chairman of CBS News and the program’s executive producer, he would “always have the ability to speak his mind on ‘60 Minutes’ when the urge hits him.”

But a little more than three weeks after that appearance, CBS announced that Mr. Rooney had been hospitalized after developing “serious complications” from an unspecified operation.

But it was “A Few Minutes With Andy Rooney,” his weekly segment on “60 Minutes,” that made him one of the most popular broadcast figures in the country. With his jowls, bushy eyebrows, deeply circled eyes and advancing years, he seemed every inch the homespun philosopher as he addressed mostly mundane subjects with varying degrees of befuddlement, vexation and sometimes pleasure.

He admitted to loving football, Christmas, tennis, woodworking and Dwight D. Eisenhower, one of the few politicians who won his approval because, as an Army general during World War II, he had refused to censor Stars and Stripes, the G.I. newspaper for which Mr. Rooney worked. He also claimed to like shined shoes and properly pressed pants and had machines in his office to take care of those functions, although somehow he always managed to look rumpled.

But he was better known for the things he did not like. He railed against “two-prong plugs in a three-prong society,” the incomprehensibility of road maps, wash-and-wear shirts “that you can wash but not wear,” the uselessness of keys and locks, and outsize cereal boxes that contained very little cereal.

“I don’t like any music I can’t hum,” he grumbled.

He observed that “there are more beauty parlors than there are beauties” and that “if dogs could talk, it would take a lot of the fun out of owning one.”

He made clear that he thought Gen. George S. Patton and Ernest Hemingway, both of whom he had known personally, were gasbags. He disliked New Year’s Eve, waiting in line for any reason and the bursars at whatever colleges his children attended.

On the subject of higher education, he declared that most college catalogs “rank among the great works of fiction of all time,” and that a student of lackluster intellect who could raise tuition money would find it “almost impossible to flunk out.”

Time magazine once called him “the most felicitous nonfiction writer in television.” But Mr. Rooney was decidedly not everyone’s cup of tea.

The New York Times columnist Anna Quindlen, for example, took strong issue with Mr. Rooney’s dismissive comments after Kurt Cobain of the band Nirvana committed suicide in 1994. It was not surprising, she wrote, that Mr. Rooney “brought to the issue of youthful despair a mixture of sarcasm and contempt,” but it was “worth noting because in 1994 that sort of attitude is as dated and foolish as believing that cancer is contagious.”

Mr. Rooney’s opinions sometimes landed him in trouble. In 1990, CBS News suspended him without pay in response to complaints that he had made remarks offensive to black and gay people.

The trigger was a December 1989 special, “A Year With Andy Rooney,” in which he said: “There was some recognition in 1989 of the fact that many of the ills which kill us are self-induced. Too much alcohol, too much food, drugs, homosexual unions, cigarettes. They’re all known to lead quite often to premature death.” He later apologized for the statement.