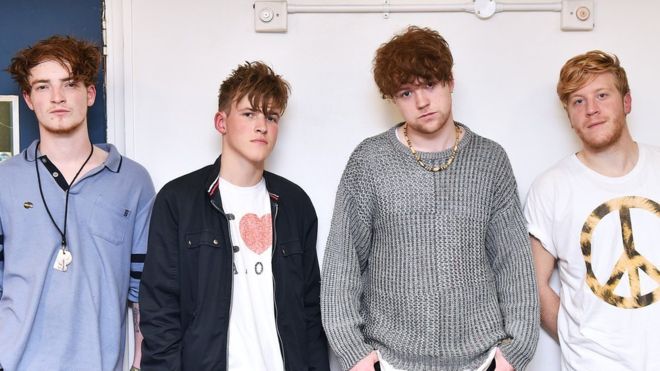 The four members of British indie band Viola Beach and their manager have died in a car crash in Sweden.

Kris Leonard, River Reeves, Tomas Lowe and Jack Dakin and manager Craig Tarry were killed when their car plunged more than 25m (82ft) from a highway bridge into a canal.

The incident happened in the early hours of Saturday near Stockholm.

Mr Tarry’s family say they are grieving his loss and “for the other families involved in this tragic accident”.

In a statement, issued via the UK Foreign Office, they said they were “devastated”, adding: “Craig was a warm, loving person who had worked tirelessly to achieve success and follow his dreams within the music industry.

“He will be sadly missed by his family and his colleagues.”

The Foreign Office earlier confirmed the deaths and said it was supporting the families.

The band were part of the line-up for Swedish music festival Where is the Music? on Friday and were due to play a gig in Guildford in Surrey on Saturday.

A musician who played at the same gig in Sweden said “they were fantastic people to be around”.

John Olsson, from Swedish band Psykofant, said: “They were a great band. I was standing in the audience thinking I will be able to say I hung around with Viola Beach before they made it big.”

The Boiler Room – the Guildford venue they were due to play – said it was “saddened and devastated” to learn of the deaths.

Blossoms, the band that was meant to be headlining the gig, tweeted: “Absolutely devastated for the loss of Viola Beach and Craig Tarry. Our thoughts are with their friends and families.”

The four piece’s last post on Facebook was on 2 February, when they wrote about playing a gig in the US next month.

Tributes have been pouring in for the band.

Music promoter Dave Pichilingi booked the band for the Liverpool Sound City festival last year and they were scheduled to play again this year.

They were a “hungry, energetic, amazing” band who “were on the verge of great things”, he said.

BBC Radio Merseyside presenter Dave Monks, who was among the first to play their music on air, said they were “great guys” who had “so much going for them”.

The Lounge is a live music bar in Warrington and it’s where friends say Viola Beach was “made”.

Three members of the band had worked here, one of them, Tomas Lowe, for 10 years.

It’s where the boys rehearsed and tried out new songs on a friendly crowd.

A poster of Viola Beach is still proudly displayed outside – it says the boys will be back in Warrington in March.

Not at the bar, because their fan base had grown too big, but at a bigger venue just over the road.

It was a homecoming gig that had sold out with two months to go, one that won’t now take place.

This afternoon friends gathered inside the bar and spoke of how talented the band was and how they were just getting big. Successful but still modest, they said.

The Lounge is known as a live music venue. This afternoon it’s silent.