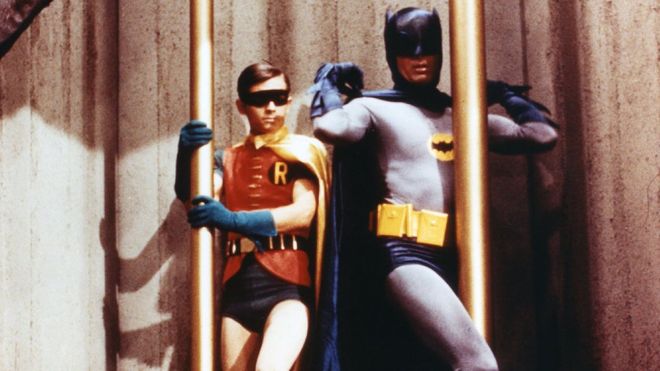 Adam West, the US actor best known as the star of the 1960s hit TV series Batman, has died aged 88.

West died peacefully in Los Angeles after a brief battle with leukaemia, a family spokesperson said.

His tongue-in-cheek portrayal of Batman and the superhero’s alter ego Bruce Wayne won a cult following.

However, West later struggled to find acting work. He most recently played a character in the animated comedy Family Guy.

“Our dad always saw himself as The Bright Knight, and aspired to make a positive impact on his fans’ lives. He was and always will be our hero,” the actor’s family said in a statement, reported in Variety.

The Batman TV series, with its onscreen fight-scene graphics of Wham! and Pow! became an unexpected hit. West and his co-star Burt Ward, who played Batman’s sidekick Robin, won widespread acclaim for their kitsch portrayal of the Dynamic Duo.

Actor Julie Newmar, who played Catwoman in the series, paid tribute to West on Saturday, saying he was was “bright, witty and fun to work with”.

“I will miss him in the physical world and savour him always in the world of imagination and creativity,” she said.

In a 2010 interview with the website Slice of SciFi, West said the TV series had benefitted from very good writers.

“They saw the craziness, the comedy. You know, just as he’s about to put her in (jail), Batman says to Catwoman, ‘You give me curious stirrings in my utility belt.’ That’s funny stuff.”

When the series ended, West struggled to break free from the character, but over a long career appeared in nearly 50 films including Drop Dead Gorgeous, An American Vampire Story and Nevada Smith.

In Family Guy, West played the mayor of the town of Quahog, who was named – Adam West.

West was born in 1928 in Walla Walla, Washington state, and began his acting career in Hawaii in the 1950s.

He is survived by his wife, Marcelle, six children, five grandchildren and two great-grandchildren.