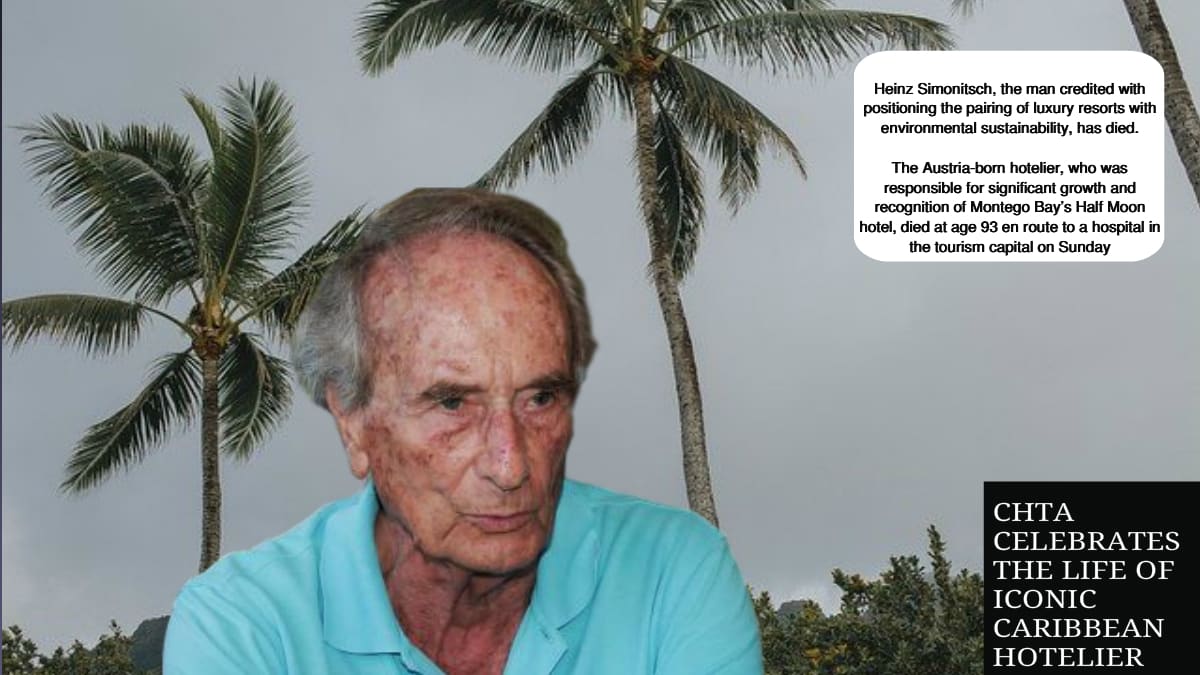 The Caribbean Hotel and Tourism Association (CHTA) saluted legendary hotelier Professor Heinz Simonitsch, CD, who passed away over the weekend, as the foremost pioneer of sustainable tourism development in the region.

“Professor Heinz was a pioneer in the industry in so many ways, leading by example, providing exemplary service, infusing ‘The Caribbean’ and ‘Jamaican’ into his product offering, and expanding the boundaries of the industry well beyond that of his popular Half Moon hotel with investments in the development of the people and communities surrounding his property,” recalled CHTA’s CEO and Director General Frank Comito and CHTA President Patricia Affonso-Dass in a joint statement Monday.

The region’s tourism leaders expressed sorrow to learn of Professor Simonitsch, a former Caribbean Hotelier of the Year, a CHTA Past President, and the first recipient of CHTA’s “Icon of Hospitality” honor for his exceptional contributions to the sector.

“For the decades he served our region he has been an ongoing inspiration to so many in the industry,” the CHTA officials stated, adding that he remained engaged with CHTA to the end, “reading and reviewing our information and just recently commending us for the work we were doing to address the COVID-19 pandemic.”

“His legacy and leadership will continue to live on in so many of us and in the very fibers of the Caribbean Hotel and Tourism Association, the Education Foundation, and the Caribbean Alliance for Sustainable Tourism (CAST), which he helped to set up,” they said.

When the growth of tourism and hospitality were raising questions about the effects of unbridled tourism development, Professor Simonitsch showed hoteliers how their increased attention to the needs of local communities and their shared environment could benefit both while enhancing the profitability of their properties.

His clear vision and business acuity enabled him to show the world how a luxury resort-like Half Moon could attract and maintain high-end guests by displaying proactive environmental protection, implementing effective responses to the medical and educational needs of local communities boosting the employment and training of locals.

The hotelier secured global recognition of the ineradicable complementarity of luxury and sustainable economic, social, and environmental development.

Professor Simonitsch moved to Jamaica in 1963, where he leaped to prominence when he expanded The Half Moon Club into a leading 400-acre resort. Before his iconic innovations in the region, he enjoyed a distinguished career in the Caribbean tourism industry, earning many distinctions since he began in 1953 as dining room captain at the Elbow Beach Surf Club in Bermuda before he became the managing director of Half Moon Golf, Tennis and Beach Club in 1965 until his retirement in 2002. Before his passing, he split his time between Jamaica and his home country of Austria, where he owned the Grandhotel Lienz, which opened in April 2009.

He received many accolades, including the Honorary Order of Distinction, Commander Class (CD) conferred by the Governor-General of Jamaica for outstanding contribution to tourism in Jamaica and the Caribbean; the Golden Cross from the Austrian Government for his long service as Honorary Consul General in Jamaica; the International Humanitarian Award from the American Friends of Jamaica for his commitment to helping the Jamaican population; the title of Professor awarded by the Austrian President for services and outstanding contribution to Austria; and the Blue Mountain award conferred for exceptional contributions to the continued growth and development of Jamaica’s tourism industry.

The Caribbean Media Exchange recognized his communication understanding and commitment to transparency for Sustainable Tourism (CME), which gave him its top award.

“We join the legions of people who will remember Professor Heinz for his humanity, generosity, grace, and friendship,” noted Comito and Affonso-Dass.