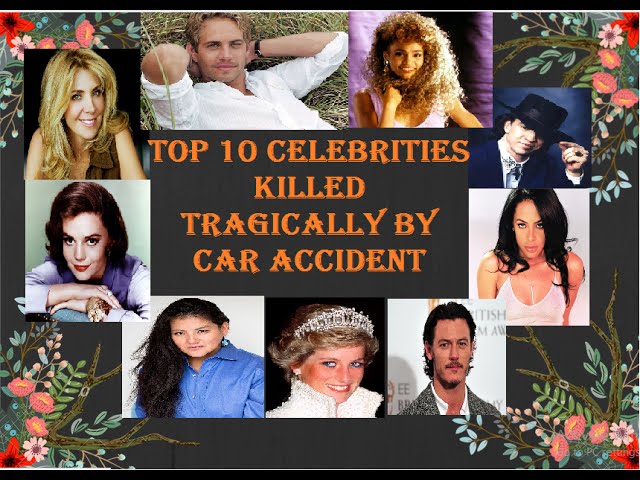 Top 10 Celebrities Tragically Killed in Car Accidents before their time.

Accidents happen every day – even to famous people.

1.Aaliyah died at the age of 22.
The R&B singer died tragically young when a plane crash cut short her promising career in 2001.

2.Brandon Lee, the son of martial arts legend Bruce Lee, died at age 28.
The actor died when he was accidentally shot while filming The Crow in 1993.

3.Diana died at the age of 36.
The "People's Princess" was killed in a high-speed car crash in Paris while fleeing press photographers.

4. Actress Misty Upham died at the age of 32.
Upham went missing in October 2014 and was found dead weeks later
at the bottom of a cliff. An autopsy stated that the actress had died of blunt-force
injuries to her head and torso on the day she disappeared. Upham is best known for her
role in Frozen River (2008),which saw her nominated for an Independent Spirit Award
for Best Supporting Actress.

5. Natalie Wood died age 43
The actress drowned in mysterious circumstances on a boat trip with her husband Robert
Wagner and the actor Christopher Walken, with whom she was co-starring in the movie Brainstorm.
Allegedly no one saw Wood enter the water.

6. Natasha Richardson died at age 45.
The actress died from internal bleeding after a fairly minor head injury while skiing.

7. Paul Walker died at age 40.
The Fast and Furious star died tragically young in a high-speed car crash.
His friend Roger Rodas was driving them away from an event for Walker's charity
Reach Out Worldwide for victims of Typhoon Haiyan. The car, a 2005 Porsche GT, was likely going at
speeds of around 90mph in a 45mph zone. It hit a concrete lamppost and two trees and burst into flame.
Both men died in the crash.

8. Vaughan died at the age of 35.
The influential guitarist was tragically killed in a helicopter crash in 1990.

9. Whitney Houston died age 48.
The legendary singer drowned in a hotel bathtub after an overdose of cocaine and alcohol,
complicated by heart disease.