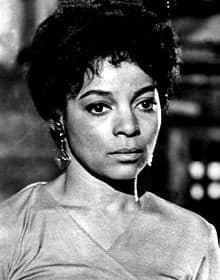 Ruby Dee (née Wallace; October 27, 1922 – June 11, 2014) was an American actress, poet, playwright, screenwriter, journalist and activist. She is perhaps best known for co-starring in the film A Raisin in the Sun (1961) and the film American Gangster (2007) for which she was nominated for an Academy Award for Best Supporting Actress. She was the recipient of Grammy, Emmy, Obie, Drama Desk, Screen Actors Guild Award, and Screen Actors Guild Lifetime Achievement Awards as well as the National Medal of Arts and the Kennedy Center Honors. She was married to actor Ossie Davis until his death in 2005. On June 11, 2014, Dee died at her home in New Rochelle, New York.

Dee was born Ruby Ann Wallace in Cleveland, Ohio in 1922, to Gladys Hightower and Marshall Edward Nathaniel Wallace, a cook, waiter and porter. After her mother left the family, Dee’s father remarried, to Emma Amelia Benson, a schoolteacher.

Dee was raised in Harlem, New York. She attended Hunter College High School and went on to graduate from Hunter College with a degree in romance languages in 1945. She was a member of Delta Sigma Theta.

For Ruby Dee, acting and activism weren’t contradictory things. They were inseparable, and they were intertwined.

The African-American actress, who earned lead roles in movies and on Broadway, also spent her life fighting against injustice, even emceeing the 1963 March on Washington and protesting apartheid in South Africa.

“We are image makers. Why can’t we image makers become peacemakers, too?” she asked after she and her husband, Ossie Davis, accepted the Screen Actors Guild Award for Lifetime Achievement in 2000.

That legacy of entertaining and pushing for change — in addition to the epic love affair with Davis — made Dee, who died at age 91 in her New Rochelle home on Wednesday night, a beloved figure in America and beyond. Broadway theaters will dim their lights in her honor Friday night.

As a sign of how influential Dee has been to generations of performers, she was thanked twice from the podium at Sunday’s Tony Awards, by six-time winner Audra McDonald and new Tony winner director Kenny Leon.

“She will be missed but never forgotten as she lives on in many of us,” Leon said in a statement Thursday, noting Dee’s death came just weeks after that of Maya Angelou. “Maya and Ruby leave us only days apart — those two women with four letter names instructed us on how to live.”

Dee’s long career earned her an Emmy, a Grammy, two Screen Actors Guild awards, the NAACP Image Award, Kennedy Center Honors, the National Medal of Art and the National Civil Rights Museum’s Lifetime Achievement Award. She got an Oscar nomination at age 83 for best supporting actress for her role in the 2007 film “American Gangster.”

Spike Lee, who directed Dee and her husband in “Do the Right Thing,” took to Instagram to say he was “crushed.” He said it was one of his “great blessings in life to work with two of the finest artists and activists — Ruby and Ossie.”

President Barack Obama said he and his wife, Michelle Obama, were saddened to hear of Dee’s death and will never forget seeing her in “Do the Right Thing” on their first date.

“Through her remarkable performances, Ruby paved the way for generations of black actors and actresses, and inspired African-American women across our country,” he said in a statement.

Dee made her Broadway debut in the original production of “South Pacific” and in 1959 starred in the Broadway premiere of “A Raisin in the Sun,” about black frustration amid racial discrimination, opposite Sidney Poitier. Both reprised the roles in the film two years later.

Davis and Dee, who met in 1945 when she auditioned for the Broadway play “Jeb” and married on a day off from another play in 1948, shared billing in 11 stage productions and five movies during long parallel careers.

But they were more than a performing couple. They were also activists who fought for civil rights, particularly for blacks.

Along with film, stage and television, their richly honored careers extended to a radio show, “The Ossie Davis and Ruby Dee Story Hour,” which featured a mix of black themes.

As young performers, they participated in the growing U.S. movement for social and racial justice. They were friends with barrier-breaking baseball star Jackie Robinson and his wife, Rachel Robinson — Dee played her, opposite Robinson himself, in the 1950 movie “The Jackie Robinson Story” — and with the Rev. Martin Luther King Jr. and Malcom X. They spoke at the funerals for King and Malcom X.

Their activism never waned. They celebrated their 50th wedding anniversary by helping to launch the 30th-anniversary celebration of the University of Iowa Black Action Theatre and in 1999 were arrested protesting the shooting death of unarmed African immigrant Amadou Diallo by New York police.

In 1998, they released a dual autobiography, “With Ossie and Ruby: In This Life Together.”

Dee and Davis, who died in 2005, were celebrated as national treasures when they received the National Medal of Arts in 1995 and got a Lifetime Achievement Award from the Screen Actors Guild in 2000. In 2004, Dee and Davis received Kennedy Center Honors. Another honor came in 2007 when the recording of their memoir won a Grammy for best spoken word album.

Dee, born Ruby Ann Wallace in Cleveland, moved to Harlem with her family as an infant. She attended her first protests as a child, joining picket lines to rail against discriminatory hiring practices. She graduated from a highly competitive high school and enrolled in college but longed to act.

“I wanted to be an actor, but the chances for success did not look promising,” she wrote in their autobiography.

But in 1940 she got a part in a Harlem production of a new play, “On Strivers Row,” which she later called “one giant step” to becoming a person and a performer.

In 1965, she became the first black woman to play lead roles at the American Shakespeare Festival. She won an Obie Award for the title role in Athol Fugard’s “Boesman and Lena” and a Drama Desk Award for her role in “Wedding Band.”

On television, Dee was a leading cast member on the soap operas “Guiding Light” and “Peyton Place,” a rare sight for a black actress in the 1950s and 60s. As she aged, her career did not ebb. She was the voice of wisdom and reason as Mother Sister in 1989’s “Do the Right Thing” and won an Emmy as supporting actress in a miniseries or special for 1990’s “Decoration Day.”

Most recently, Dee performed her one-woman stage show, “My One Good Nerve: A Visit With Ruby Dee,” in theaters across the country.

She is survived by three children and seven grandchildren. Her family and friends surrounded her when she died, Nora Davis Day said.

“We have had her for so long and we loved her so much,” Day said. “We gave her our permission to set sail. She opened her eyes, closed her eyes and away she went.”