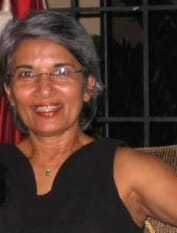 It with great sadness that The Cropper Foundation announces the passing of its co-founder and first President, Angela Cropper, in London on Monday 12th November 2012 after a protracted illness. She was ten days shy of her 67th birthday.

Angela’s passing is a tremendous loss to Trinidad and Tobago, the Caribbean and the global community. In a career spanning over thirty-nine years, she gave unstintingly of herself in public policy positions and in voluntary service in education, governance and the environment. A former independent senator in Trinidad and Tobago, until recently she had been United Nations Assistant Secretary General and Deputy Director of the United Nations Environmental Programme (UNEP), serving in this position from 2007 until the end of 2011 and continuing afterwards as a special advisor. In 2001-2005 she was Co-chair of the Millennium Assessment Panel, a global programme to undertake a holistic scientific assessment of the state of ecosystems across the world; and served as a member of the core writing team for the synthesis report, Ecosystems and Human Well-Being; as well as Co-ordinating Lead Author of the Caribbean Sea Ecosystem Assessment. Previously Angela was Senior Adviser on Environment and Development at the UNDP Bureau for Development Policy; Executive Secretary of the United Nations Convention on Biological Diversity; and Head of Governance at the World Conservation Union. In the 1980s she had served as Director of Functional Cooperation at the CARICOM Secretariat and Adviser in Environment and in Education to the CARICOM Secretary-General; and as Caribbean Representative of the International Planned Parenthood Federation/Western Hemisphere Region and Project Manager for the Eastern Caribbean in Population and Development. She began her career in the 1970s as a research officer at the Caribbean Industrial Research Institute (CARIRI) in Trinidad and was an active member of the Tapia House Movement in that country.

Angela Cropper commanded enormous respect and esteem internationally and as such she was invited to contribute as an adviser or trustee to numerous international organisations. Among these were the World Commission on Forests and Sustainable Development, for which she was the main author of its 1999 report Our Forests…Our Future; the United Nations University, the Stockholm Environment Institute, the European Union High-Level Panel on Sustainability, the Iwokrama International Centre for Rainforest Conservation and Development in Guyana, the External Advisory Group to the World Bank on the Implementation of its forest strategy, and the South Centre. In 2005 she was a recipient of the Zayed Prize for Environmental Action Leading to Positive Change in Society; she was also recipient of a Green Leaf Award from the Environmental Management Authority of Trinidad and Tobago. In 2006 she was McCluskey Fellow and Member of the Faculty at the Yale School of Forestry and Environmental Studies; and in 1999-2000 she was Visiting Fellow, Woods Hole Research Center, Massachusetts, USA. Angela held degrees in Economics and in Law from the University of the West Indies; and in 2009 she was awarded an honorary doctorate by her Alma Mater for her outstanding service to Trinidad and Tobago, the region and the world in the field of Environment and Sustainable Development.

Angela Cropper had a lasting impact on her friends and colleagues; as a role model to many of those with whom she came into contact and as mentor to the many young people with whom she worked. She inspired others with her high standards of professionalism, integrity and service to community. “Life is more than personal advantage” was the motto she gave to The Cropper Foundation, and she lived it. Born in Aranguez, Trinidad as the sixth child of twelve, Angela Persaud, as she then was, grew up learning her mother’s insistence on fair sharing and of setting something aside for the “absent ones”. Equity, and a profound sense of social responsibility; were ideals that infused her work on education, the environment and governance. She displayed enormous strength of character in coping with the untimely loss of her only child, Devannand; and later with the tragic deaths of her husband, mother and sister. Angela continued her work as adviser and mentor and, in spite of her personal loss, she maintained her principled stand against capital punishment.

In 2000 Angela and her husband John Cropper established The Cropper Foundation, a not-for-profit organisation through which they aimed to continue their work in sustainable development, equity, and better environmental and resource management. To encourage partnerships and facilitate budding projects was always the Foundation’s aim. As Angela emphasised in her Founder’s Note for the Foundation’s 10th Anniversary publication, “giving back is not a luxury; it is a responsibility.”

The Board of Trustees and the Staff of The Cropper Foundation extend their heartfelt condolences to the family of Angela Cropper at their loss. Rest in Peace, Angela.

Details of a Memorial Service to commemorate the life of Angela Cropper will be announced. Please leave your tributes with The Cropper Foundation at http://angela.cropper.muchloved.com/