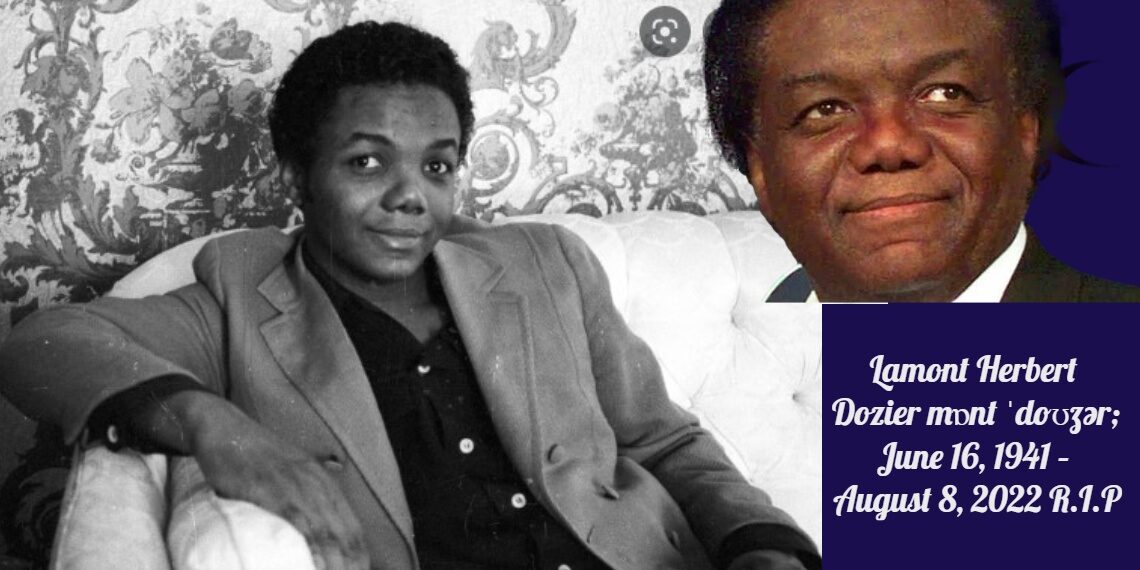 Lamont Dozier, the Motown songwriter and producer who played an integral role in the success of Motown Records, has died. He was 81 years old.

On Monday, Dozier’s son, Lamont Dozier Jr., confirmed the death of his father in an Instagram post, though a cause of death is yet to be revealed.

“Rest in Heavenly Peace, Dad!” he captioned the photo with his father.

Dozier made up one-third of the Holland-Dozier-Holland team with brothers Brian and Eddie Holland. Together, the trio wrote, arranged and produced songs that led to the success of Motown in the 1960s, like “Quicksand” and “Heat Wave” by Martha and the Vandellas, “Bernadette” and “I Can’t Help Myself” by the Four Tops and more. Together, they created 15 songs that hit No. 1. He also worked with Marvin Gaye, a drummer-turned-singer at the time, on “How Sweet It Is (To Be Loved By You).”

Lamont Dozier was born in Detroit on June 16, 1941, and launched his career in music as a singer of multiple doo-wop groups like the Romeos and the Voice Masters. Later, in 1962, he signed to Motown Records as a songwriter, leading him to Brian and Eddie.

“It was like Brian and I could complete one another’s musical ideas the way certain people can finish one another’s sentences,” Dozier wrote in his 2019 memoir titled How Sweet It Is. “I realized right away that we shared a secret language of creativity.”

He also wrote: “Brian was all music, Eddie was all lyrics, and I was the idea man who bridged both.”

In 1964, when the trio partnered with girl group The Supremes to create three No. 1s — “Where Did Our Love Go,” “Baby Love,” and “Come See About Me” — they realized they were onto something.

“Brian and I used to have lunch at that little walk-up, and once that wheel started rolling with ‘Where Did Our Love Go,’ I said, ‘Man, we’ve stumbled up into something — are you feeling this?’ He said, ‘Yeah, I’m feeling it too,’ ” he told the outlet. “I said, ‘I don’t know what this is, but I don’t think this thing is going to stop.’ It was like being at the carnival and hitting that bell, bam! Number One! Bam! Number One! Bam! Number One! We were here with the Four Tops when we weren’t doing that with The Supremes. Bam! It was surreal.”

The trio left Motown in 1967 over a contract dispute with label founder Berry Gordy. They continued making music and launched their labels Invictus and Hot Wax. Lamont Dozier also started making music himself and released hit songs like “Why Can’t We Be Lovers” and “Trying to Hold on to My Woman.”

In the late ’80s, he partnered with Phil Collins to release “Two Hearts,” featured in Buster’s film. The song earned Dozier his first Grammy nomination and win for best song written specifically for a motion picture or television.

Dozier eventually served as an artist-in-residence professor at the University of Southern California’s Thorton School of Music. He was also a chairman of the National Academy of Songwriters board.

During an interview with the Detroit Free Press in 2019, ahead of the release of his memoir, he reflected on his work.

“Everything I write, I give credit to God, the master muse,” he said. “I thank him for letting me put my name on his music. That’s how I started [regarding] it. I don’t read music, and I can’t write it either. I did it all by ear and felt it while sitting at the piano. But I still hear that stuff over and over. It still hasn’t let up. They still play that music, man. It’s amazing. I thought some of it wouldn’t last a day. But it’s been here for 60 years, and that’s a great feeling — all over the world.”