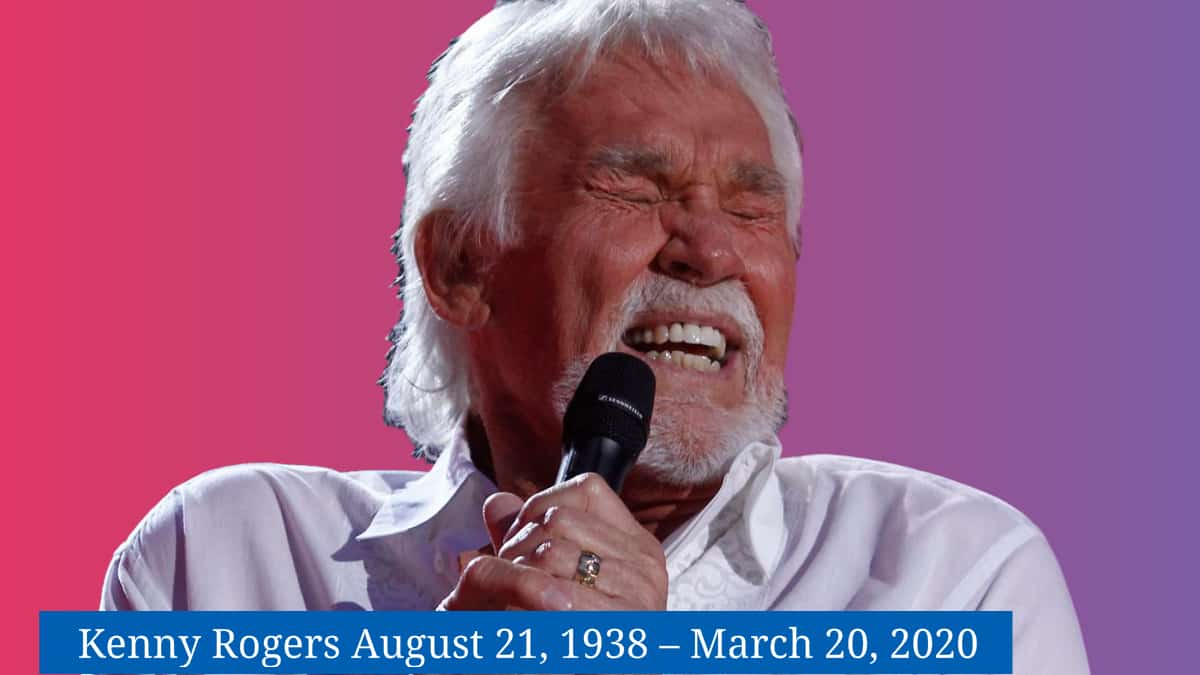 Kenny Rogers (Kenneth Ray Rogers), the legendary country and western music, was born on August 21, 1938, and died on March 20, 2020. He was an American singer, songwriter, actor, record producer, and entrepreneur.

Kenny Rogers got elected to the Country Music Hall of Fame in 2013.

Rogers was particularly popular with country audiences but also charted more than 120 hit singles across various music genres, topped the country and pop album charts for more than 200 individual weeks in the United States alone. He sold over 100 million records worldwide during his lifetime, making him one of the best-selling music artists of all time.

Kenny Rogers, died Friday night, according to a statement posted by his family. Known for such hits as “The Gambler,” “Lady,” “Islands in the Stream,” and “Lucille,” Rogers died peacefully at home in Sandy Springs, Ga., of natural causes at 10:25 p.m., the statement said.

In all, Kenny Rogers had 24 No. 1 hits and was the winner of six CMA Awards and three Grammys, the family’s statement said.

Raised in public housing along with seven siblings, Kenny was born in Houston, Texas. He had his first gold single at age 20 with a song called “That Crazy Feeling” under the name Kenneth Rogers.

He then joined a jazz group, the Bobby Doyle Trio, as a standup bass player. His breakthrough came in 1966 when asked to join a folk group called the New Christy Minstrels. The band reformed as First Edition and scored a pop hit with the psychedelic song, “Just Dropped In (To See What Condition My Condition Was In).” After the group disbanded in 1974, Rogers pursued a solo career, and his 1977 hit “Lucille” crossed over to the pop charts and earned the crooner his first Grammy.

“The Gambler,” written by Don Schlitz, came out in 1978, which became Rogers’ signature song he later developed into a series of television movies in that he starred.

One of his biggest hits was “Lady,” written by Lionel Richie, a chart-topper for six weeks straight in 1980. Other singles included “You Decorated My Life,” “Every Time Two Fools Collide,” with Dottie West, “Don’t Fall In Love with a Dreamer” with Kim Carnes, and “Coward of the County.”

Over the years, Rogers collaborated with several female duet partners, most notably, Dolly Parton. The two paired at the suggestion of the Bee Gees’ Barry Gibb, who wrote “Islands in the Stream.”

“Barry was producing an album on me, and he gave me this song,” Rogers told the Associated Press in 2017. “And I went and learned it and went into the studio and sang it for four days. And I finally looked at him and said, ‘Barry, I don’t even like this song anymore.’ And he said, ‘You know what we need? We need Dolly Parton.’ I thought, ‘Man, that guy is a visionary.’

“From the moment she marched into that room, that song never sounded the same,” Rogers added. “It took on a whole new spirit.”

Rogers and Parton toured together, leading to an HBO concert special. The two later recorded “You Can’t Make Old Friends” in 2013. That same year, Rogers was a winner of the CMA’s Willie Nelson Lifetime Achievement Award and got inducted into the Country Music Hall of Fame.

He received a total of 10 awards from the Academy of Country Music. According to the Recording Industry Association of America, Rogers sold more than 47 million records in the United States alone.

He was a superstar for six decades before retiring from touring in 2017 at the age of 79. Despite his crossover success, Rogers always preferred to be thought of as a country singer.

“You either do what everyone else is doing, and you do it better, or you do what no one else is doing, and you don’t invite comparison,” Rogers told The Associated Press in 2015. “And I chose that way because I could never be better than Johnny Cash or Willie or Waylon at what they did. So I found something that I could do that didn’t invite comparison to them. And I think people thought the mind desired to change country music. But that was never my issue.”

Last May, Rogers was admitted to a Georgia hospital for dehydration, amid rumors that his overall health was failing. In 2018, health problems prompted Keny Rogers to call off shows during what pointed out his farewell concert tour.

A statement from the singer’s management at the time stated that “Kenny Rogers has been working through a series of health challenges. He has now to cancel all performances through the end of the year to focus on recuperation,”

“I didn’t want to take forever to retire,” Rogers was quoted as saying. “I’ve thoroughly enjoyed this opportunity to say farewell to the fans over the past two years on ‘The Gambler’s Last Deal’ tour.”

In addition to his musical craft, Rogers had a chain of restaurants called Kenny Rogers Roasters and was a partner behind a riverboat in Branson, Mo.

He was involved in several charitable causes, including the Red Cross and MusiCares.

His wife, Wanda, survive rogers, and his sons Justin, Jordan, Chris and Kenny Jr., as well as two brothers, a sister, and grandchildren, nieces, and nephews, his representative said.

The family is planning a private service “out of concern for the national COVID-19 emergency,” a statement posted early Saturday read. The also stated, that there a plans for a public memorial later date.