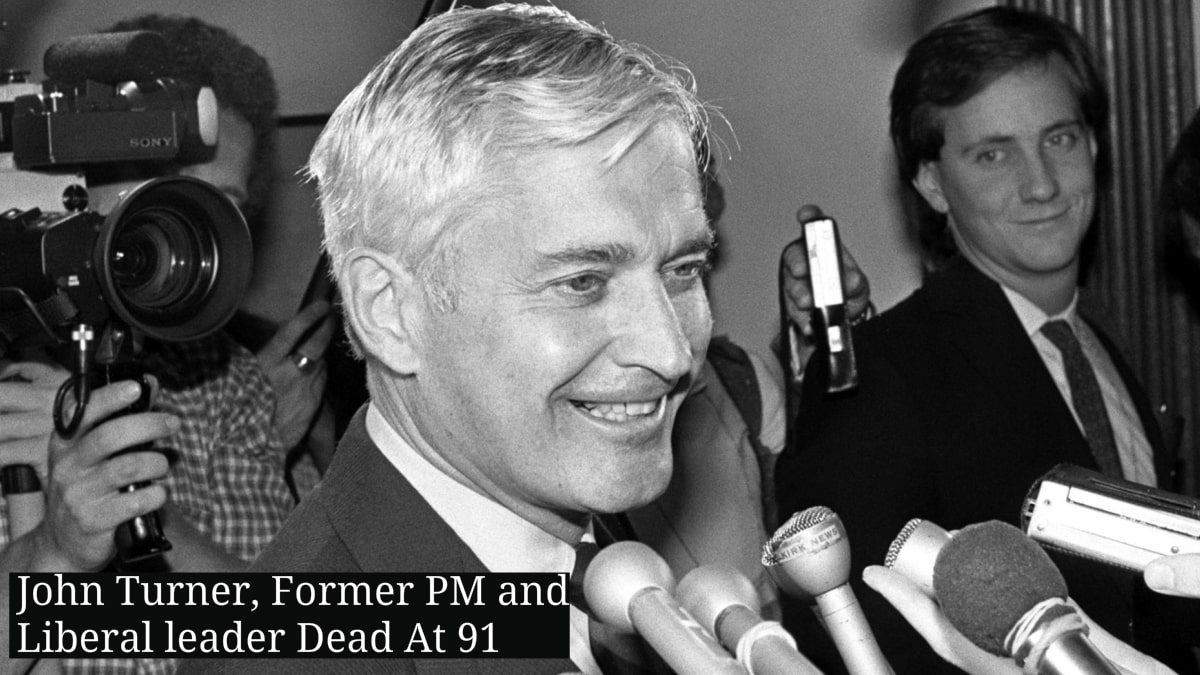 John Turner, Canada’s 17th prime minister who spent decades in federal politics as a cabinet minister and Liberal Party leader during some of the most turbulent moments in modern Canadian history, has died at 91.

Turner led Canada for 79 days in 1984 — the second-shortest time in the office of any prime minister.

Dubbed “Canada’s Kennedy” as a stylish, up-and-coming young MP in the early 1960s, John Turner was Pierre Trudeau’s chief anglophone lieutenant in the cabinet for years. Turner served as a justice minister when the government decriminalized homosexuality and suspended civil liberties during the October Crisis in 1970. The finance minister, as Ottawa struggled to control deficit spending and inflation during the oil crisis.

After a shock resignation from Trudeau’s government and a period of self-imposed exile on Bay Street, Turner eventually completed his climb to the Liberal leadership in the mid-1980s. But he inherited a party suffering from years of accumulated scandals and an electorate ready for a change after more than two decades of nearly unbroken Liberal rule.

In the end, Turner’s most enduring moments in federal politics came once his short stint at 24 Sussex was over — namely, years of bitter battles waged with Brian Mulroney over free trade with the United States. They were fierce fights that Turner eventually lost, but the legacy of those debates continues to shape Canadian politics today.

On Saturday, Mulroney remembered Turner as a man “destined for great success” and a politician who “never believed in the politics of personal destruction.”

In a statement confirming his passing, the Department of Canadian Heritage called Turner “an accomplished lawyer and politician, [who] got recognized for his integrity and commitment to democracy.

“Through three decades of public service as a cabinet minister, Leader of the Opposition, and 17th Prime Minister of Canada (1984), he was tirelessly devoted to upholding Canadian values and principles.”

Prime Minister Justin Trudeau, in a statement, said that he had “learned with great sadness today of the death of the Right Honourable John Turner, former Prime Minister of Canada.”

Trudeau noted John Turner served in numerous capacities before his stint as prime minister, including minister of consumer and corporate affairs, minister of justice and attorney general of Canada, minister of finance and leader of the opposition.

“He was deeply committed to the law and democratic process, bringing about much-needed reforms to the Criminal Code.

“Mr. Turner was a humble man with a strong social conscience. He supported many charitable organizations, including Mount Sinai Hospital in Toronto. He was also an honorary director of World Wildlife Fund Canada and an ardent advocate for protecting Canada’s lakes and rivers.”

Turner was born in the English town of Richmond upon the Thames on June 7, 1929. When his father died just three years later, his Canadian-born mother moved the family to Canada. They eventually settled in Ottawa’s posh Rockcliffe Park neighborhood, surrounded by members of the country’s ruling political class.

After the Second World War, his mother remarried — to industrialist and future B.C. lieutenant governor Frank Ross — and the family moved west, where the former Canada PM John Turner attended the University of British Columbia. He became a track star, setting a national record for the 100-yard dash in 1947, and narrowly missed his chance to compete at the 1948 Olympics after smashing his knee in a car accident.

“Chick,” as the famous athlete became known, graduated from UBC in 1949 and received a Rhodes scholarship to study law at Oxford. He was called to the bar in London and started a doctorate at the Sorbonne in Paris. He returned to Canada in 1953 before it got completed, joining the Montreal law firm Stikeman Elliott shortly after that.

Turner’s first taste of national politics came when C.D. Howe, the storied “Minister of Everything” under Mackenzie King, recruited him in 1957 to help organize a Liberal re-election campaign.

The young lawyer’s profile swelled within the Liberal ranks as he started speaking at policy conventions, but it truly took off after he made headlines worldwide for dancing with Princess Margaret during a 1958 royal tour of British Columbia. Letters from the princess published in 2015 revealed she “nearly married him,” and it was reported the pair only broke up after Buckingham Palace ordered an end to the relationship.

In 1961, with the Liberals languishing in opposition and eager to recruit young talent, Turner was wooed into running for the party in the 1962 federal election.

The 32-year-old lawyer accepted, winning his Montreal riding and joining a cohort of rookie lawmakers — including Herb Gray and Gerald Regan — that Maclean’s magazine called “probably the brightest group of MPs ever to appear simultaneously in a Canadian Parliament.”

Turner married his wife, Geills McCrae Kilgour, in 1963, at a time when he was quickly rising within the Liberal caucus. By 1965, he had joined Lester Pearson’s cabinet as minister without portfolio, and by 1967 he was minister of consumer and corporate affairs.

When Pearson stepped down as prime minister in 1967, Turner eagerly entered the race to replace him on an anti-establishment platform that pledged to lower the voting age and improve skills training for young Canadians.