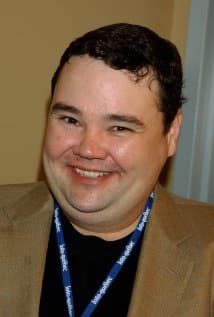 John Pinette (/pɨˈnɛt/ pə-NET; March 23, 1964 – April 5, 2014) was an American actor and stand-up comedian. He toured the comedy club circuit beginning in the 1980s and appeared in cinema and on television. Besides stand-up, Pinette did impressions of The Chipmunks, Elvis Presley, Gollum from The Lord of the Rings, Hervé Villechaize (Tattoo from Fantasy Island), an Ewok, actor Marlon Brando (notably Brando’s role in The Godfather), as well as various ethnic accents. He occasionally sang, for example “Over the Rainbow” from The Wizard of Oz, in stand-up routines.

He got a break when asked to tour with Frank Sinatra. Pinette was a regular guest on The Tonight Show and The View.[4]

Pinette was in Duets, Dear God, and Junior. He was a regular on the series Parker Lewis Can’t Lose, and starred as the carjack victim in the final episode of Seinfeld. In 2004, Pinette was Bumpo in Artisan Entertainment’s The Punisher, starring Thomas Jane and John Travolta.[3]

Pinette was named Stand-Up Comedian of the Year by the American Comedy Awards in 1999 and received a Gemini Award nomination for his televised performance at Montreal’s Just for Laughs Comedy Festival in 2000.[3]

In 2004, Pinette joined the touring cast of the musical Hairspray in the role of Edna Turnblad.[5][6] He later went on to the Broadway production in 2005, and continued in the role until May 28, 2006.[5][7] In his 2006 concert I’m Starvin’, he said it was the first musical theater production he had been in since high school.

In 2004, Pinette’s stand up material was featured in Comedy Central’s animated series Shorties Watchin’ Shorties. In 2007, Pinette performed at the 42nd annual MDA Jerry Lewis Telethon. He performed at the Edinburgh Comedy Festival in Edinburgh, Scotland, in 2008, and toured in cities in 2010 beginning in April. During this tour, Pinette recorded a Comedy Central special entitled “John Pinette: Still Hungry”. The taping took place at the Vic Theatre in Chicago. The world premiere of “John Pinette: Still Hungry” was on July 29, 2011, on Comedy Central.[8]

In 2012, Pinette was one of the comedy acts in Ron White’s Comedy Salute to the Troops on CMT.

Pinette was pronounced dead at 2:30 pm on April 5, 2014, at the Sheraton Station Square Hotel in Pittsburgh. The Allegheny County medical examiner’s office said Pinette had been suffering from liver and heart disease. An autopsy was not performed, as Pinette’s personal doctor signed off on his cause of death as pulmonary embolism.[9][10]