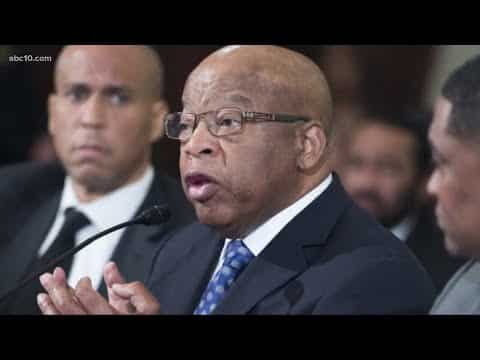 by News Contributor
in people that died today - celebs who died today, Who Important Died Today
0

Civil rights icon John Lewis was born outside of Troy, Alabama in 1940 the son of sharecroppers as a teenager he was drawn to activism surrounding the Montgomery bus boycott during the 1960s. He was at the center of nearly every significant movement in the civil rights movement. He was organizing sit-in demonstrations at segregated lunch counters.

As a student at Fisk University, Lewis was one of the first freedom riders protesting segregated interstate bus terminals across the South. A photo showed lewis with a bandage on his head after he and other passengers got beaten.

It was the beginning of what would be many arrests for the civil rights activist. He once said, “we must cry, and we all must cry together that we want our freedom, and we want it now.”

By 1963 at the age of just 23 alongside Martin Luther King Jr, he was dubbed one of the prominent six leaders of the civil rights movement who helped plan the historic march on Washington.

Lewis helped spearhead one of the most defining moments of the era leading over 600 peaceful protesters across the Edmund Pettus Bridge in Selma, Alabama, in 1965. Lewis in the front of the pack for that brutal confrontation with Alabama state troopers now known as Bloody Sunday. He was struck in the head, suffering a fractured skull at the hands of the police.

John Lewis was the first one to catch the blow.

Lewis got elected to Congress in November of 1986. He served as U.S representative of Georgia’s Fifth congressional district, where he continued to get into what he called good trouble. “I got arrested 40 times during the 60s. Since I’ve been in congress another five times.”

Lewis got awarded the Presidential Medal of Freedom the country’s highest civilian honor in February of 2011. In recent years he was an outspoken critic of President Donald Trump skipping the president’s inauguration and first state of the union address.

The late civil rights activist also took part in widespread protests against the president’s zero-tolerance immigration. “I will go to the borders I get arrested again,” Lewis said.

John Robert Lewis (February 21, 1940 – July 17, 2020) was an American politician and civil rights leader. He was the U.S. Representative for Georgia’s 5th congressional district from 1987 until he died in 2020. Lewis was the dean of the Georgia congressional delegation. The district he served includes the northern three-fourths of Atlanta. He was a member of the Democratic Party.

Lewis, who, as chairman of the Student Nonviolent Coordinating Committee (SNCC) was one of the “Big Six” leaders of groups who organized the 1963 March on Washington, played many key roles in the Civil Rights Movement and its actions to end legalized racial segregation in the United States. He was a member of the Democratic Party leadership in the U.S. House of Representatives and had served from 1991 until death as a Chief Deputy Whip and Senior Chief Deputy Whip from 2003 to his death.

John Lewis received many honorary degrees and awards from renowned national and international institutions, including the United States’ highest civilian honor, the Presidential Medal of Freedom. Lewis died on July 17, 2020, at the age of 80 from cancer. He lost his wife, Lillian Miles Lewis, in 2012 after she suffered a long illness.

Lillian Lewis met her future husband when he was already a civil rights legend, and she played a key role in his transition to a career in politics. Many thought the couple was a perfect match.

“She was a feisty lady,” said Temi Silver, an event planner, and longtime friend. “He was so sweet and gentle; he needed her to take care of his back. And she was the one to do it.”

Lillian Lewis, whose father owned a small contracting business, attended Los Angeles High School with the late Johnny Cochran and received an undergraduate degree in English from then-California State College at Los Angeles and a master’s degree in library science at the University of Southern California.