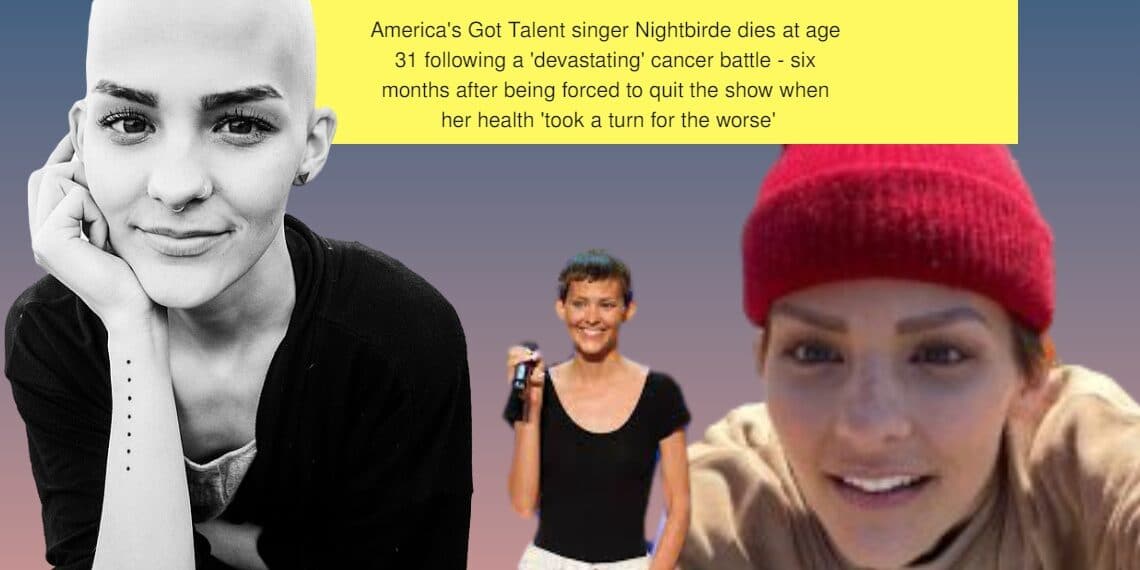 The singer from Ohio, Jane Marczewski, who used the stage name Nightbirde, passed away on Sunday following months of treatment after the disease had spread to her lungs, spine, and liver, a source told TMZ.

Marczewski amazed the AGT judges and viewers alike when she performed a poignant original song, ‘It’s OK,’ for her audition in June, earning a Golden Buzzer from an emotional Simon Cowell.

Less than two months later, she stunned everyone again by announcing that she had to quit because her cancer had ‘taken a turn for the worse.’

AGT judge Howie Mandel paid tribute to Marczewski on Twitter Monday, saying she was ‘such a bright, inspirational light in all our lives.’

‘We must continue to live and learn from her words and lyrics,’ he added. ‘As much as I feel horrible about her passing, I feel lucky to have met, heard, and known her.’

‘We are saddened to learn about @_nightbirde’s Passing,’ he captioned a photo of Jane Marczewski on the show. ‘Our Condolences goes to her Closest Family & Friends in such A difficult time. We Love you, Nightbird.’

Judge Heidi Klum also shared a picture of Marczewski on her Instagram Stories, writing: ‘We love you. Rest in peace @_nightbirde.

Marczewski was first diagnosed with breast cancer in 2017. She was in remission when it returned to a metastatic state. In 2019, a doctor gave her a two percent chance of survival, estimating she only had three to six months to live.

She once again beat the odds and was in remission when cancer returned in 2021 for the third and final time.

Marczewski had previously opened up about her cancer battle during an interview with former CNN host Chris Cuomo in August after she dropped out of the show.

She revealed that her liver was ‘more cancer than liver’ at that point, admitting that she had had a ‘bad, bad month’ since she got the news.

But just as she charmed viewers with her remarkably upbeat attitude on AGT, she also demonstrated an admirably positive mindset on CNN, explaining how she managed to avoid feeling ‘bitter’ thanks to her ‘rebellious hope.’

Jane Marczewski, who hailed from Ohio, became an instant fan favorite when she appeared on AGT last summer, sharing the story of her cancer battle and singing an original song about being OK while feeling lost.

She earned effusive praise from the judges, with the infamously tough Cowell appearing to tear up before hitting the Golden Buzzer, sending her directly to the live show’s quarterfinals.

But weeks later, she announced that she was leaving the competition because her cancer battle had become too ‘demanding.’

Though she kept a brave face, she admitted on CNN that she’s was having a hard time.

‘I have been curled up in a ball like a little cocktail shrimp having an A-plus pity party for myself, cause it’s just been a bad, bad month,’ she said.

‘I’m not a quitter, so it was hard for me to say that I couldn’t finish the show,’ she added.

Marczewski shared that about a week before; she had received the ‘shocking news that her cancer regrowth had taken over her lungs and liver.

While she admitted that it was difficult, she clung to optimism.

‘But, as I said, I’m planning my future, not my legacy. And I’m not stopping any time soon,’ Jane Marczewsk said. And some people would call that blind denial, but I prefer to call that rebellious hope.

‘When we’re going through stuff like this where the pain is too much to bear sometimes, it makes no sense at all. If we can hold onto a dream for the future, sometimes that’s all we need to get through.

‘When you’re faced with so many blows to the gut in a row — as I have over the past several years — you find out what you’re made of, in a sense. And you’re allowed to choose what you want to become.

When asked if she ever wallows and asks, ‘Why me?’ Jane Marczewski said she doesn’t bother.

‘I try not to occupy myself with questions that are too big for myself to answer,’ she explained. It’s a waste of time. Just because it’s a mystery doesn’t mean it’s the absence of meaning.

‘Sometimes the mystery means there’s more meaning there than we can even understand. And so I accept that, and I let go of the questions because it’s too heavy. ‘When you go through something so devastating, makes no sense, there are no answers, you have the choice: Am I going to become bitter? Or am I not? You do have a choice. You do get to decide what becomes of you, in a sense.

‘And I’ve decided in my most painful moments to keep my eyes open because it’s easier to close your eyes and give up and forget it. But there’s so much beauty and poetry to be seen in the world if you are willing to sign off on the pain it takes to stay awake in the middle of something that hurts so bad. That’s all this is. Anybody can do it.’

Jane Marczewski noted that while she was stepping back from AGT, she was not giving up her music.

‘This cancer’s gotta go… which I really believe is going to happen soon. And after that, I’m going to write the most amazing record you’ve ever heard in your life,’ she said, adding that she has continued to write songs.

‘I have so much beautiful stuff that I’m so excited to share, and I know that I will,’ she said.

She even shared lyrics from one tune, ‘that means a lot,’ which has a chorus that goes: ‘I still got some magic in me, I can’t feel it, but I still believe. The music stopped, but I can still sing, I’m pretty beat up, but I still got dreams.’

Jane Marczewski had first revealed on stage at her audition that she had cancer of the lungs, spine, and liver.

‘It’s important that everyone knows that I’m so much more than the bad things that happen to me,’ she said.

When Simon got emotional after her performance, she told him: ‘You can’t wait until life isn’t hard anymore before you decide to be happy.’

But on August 2, she announced on Instagram that she’d had to quit.

‘Sharing my heart with the world on AGT has been an honor and a dream come true,’ she wrote.