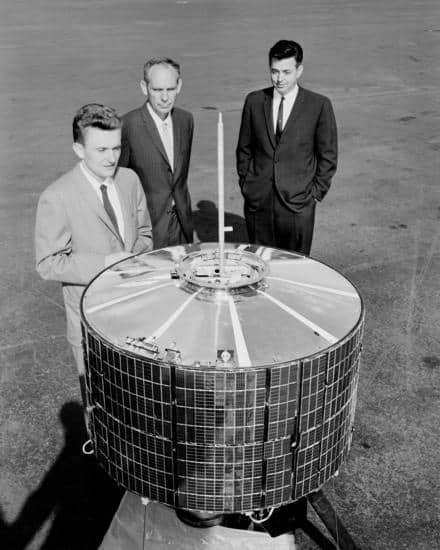 Harold Rosen, Who Ushered in the Era of Communication Satellites, Dies at 90

Whether you are reading these words online or in print, there is a strong chance that Harold A. Rosen played a part in getting them to you. Mr. Rosen, who died on Monday at 90 at his home in Pacific Palisades, Calif., was a driving force in the invention of modern communication satellite technology.

His inspiration came in 1957, when, as a young engineer, he watched the Sputnik satellite, the first ever launched, streak across the night sky in Los Angeles on its historic journey.

From its orbit, the Soviet Sputnik could transmit only beeps back to Earth. But Mr. Rosen could see that the future of relaying information over long distances was in space, and he began imagining the possibilities.

In those days, telephones were the best way to communicate between two points, but the terrestrial telephone system was reaching its operational limits. Long-distance phone calls were made by means of overtaxed cables and radio towers, and connectivity was limited. Some parts of the world were unreachable.

Mr. Rosen set out to design a satellite that would usher in a new era of telecommunications. He was working at the Hughes Aircraft Company laboratories at the time, and though his managers were skeptical, they approved his proposal to collaborate with his fellow engineers, Thomas Hudspeth and Don Williams, in designing a prototype.

The team came up with a 55-pound cylindrical device that used solar panels for power and spun like a football to remain stable. What made it revolutionary was that it would orbit the Earth at the same speed at which the planet was rotating. To an observer on the ground, the satellite would thus appear to be at a fixed point in the sky.

John Rubel, the deputy research director at the Defense Department, helped secure NASA funding for Mr. Rosen’s project, called a synchronous communication satellite, or Syncom. The Pentagon was working on similar research at the time, but the design proposed there weighed thousands of pounds.

NASA launched two Syncom satellites in 1963; one failed, but the other succeeded. President John F. Kennedy used it to phone the Nigerian prime minister that August. It was the first telephone call between heads of state via satellite.

In 1964, the launch of a third Syncom device allowed live television signals to be transmitted around the world from the Olympic Games that summer in Tokyo.

Harold Allen Rosen was born on March 20, 1926, in New Orleans and raised by his mother, the former Anna Leibof. He graduated from high school when he was 15 and enrolled in Tulane University to study electrical engineering. Drafted into the Navy during World War II, he became an electronics technician.

After the war, he completed his studies at Tulane in 1946 and went on to study at the California Institute of Technology. He earned a master’s degree there in 1948 and a Ph.D. in electrical engineering and aeronautics in 1951.

While studying at Caltech, Mr. Rosen worked part time at the Raytheon Company, where he focused on improving antiaircraft guided missiles and radar. He continued working there after getting his degree but left to join Hughes Aircraft in 1956.

He eventually oversaw the development of more than 150 communications satellites at Hughes and later at Boeing, where he worked until retiring in 1993. Along with his brother, Ben, he founded Rosen Motors, where they developed and manufactured a hybrid-electric powertrain. He also started Volacom, an aerospace firm that specialized in high-altitude, hybrid-propulsion aircraft.

Mr. Rosen received the National Medal of Technology and Innovation from President Ronald Reagan in 1985 for his work developing geostationary communication satellites. He was inducted into the National Inventors Hall of Fame in 2003.

He is survived by his second wife, Deborah Castleman; two sons, Robert and Rocky; his brother, who confirmed the death; and three grandchildren. His first wife, the former Rosetta Hirschfeld, died in 1969.

Mr. Rosen’s legacy can also be found in orbit: in the approximately 600 geostationary satellites that today handle all manner of communication data, such as television signals, GPS tracking information and telephone and internet connections, sending, among other things, these very words, by way of printing presses or digital devices, directly to readers.

Owner of the Detroit Tigers Mike Ilitch Dies At Age 87