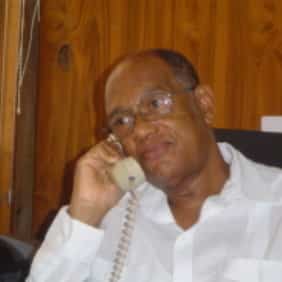 Edward Alexander died on Tuesday morning in St. Lucia where he had gone to seek medical attention.

Reports indicate he had been ailing for some time.

During his life time, Alexander wore many hats, serving as Press Advisor to Edison James and Ambassador to Haiti during the United Workers Party administration.

He has served as a telegraphist, a Minister of Religion, a Diplomat, a Broadcaster and a Journalist.

Alexander was actively involved in sports and sports administration, serving as executive member of the Dominica Amateur Sports Association, which at that time governed sporting activities on the island, as well as in other social and youth affairs.

He was born in Colihaut and received his early education at the Colihaut Government School and at the Dominica Grammar School. He later graduated from the Cable and Wireless Training School in Barbados as a telegraphist.

He studied Philosophy and Theology at L’Ecole Superieure de Theologie in Vendee, France and the Seminary of St. John Vianney in Trinidad.

He did a post graduate certificate course in Diplomatic Studies at Oxford University, earning a distinction in Diplomatic Practice.

He is survived by his wife, Patricia.