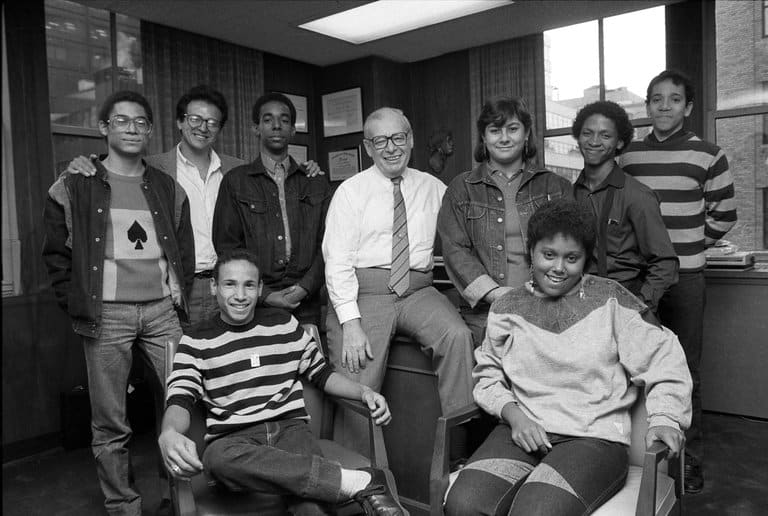 Eugene Lang, Investor Who Made College Dreams a Reality, Dies at 98

Eugene Michael “Gene” Lang (March 16, 1919 – April 8, 2017) was an American philanthropist who founded REFAC Technology Development Corporation in 1951. REFAC held patents relating to LCDs, ATMs, credit card verification systems, bar code scanners, VCRs, cassette players, camcorders, electronic keyboards, and spreadsheets, and filed thousands of lawsuits against other corporations to secure licensing fees or out-of-court settlements, a business practice of some very large corporations such as Microsoft and Google as well as large startups such as Intellectual Ventures, and sometimes criticized as patent trolling. He was also the chairman of the board at Swarthmore College.
Life and career

Lang was born in 1919 in New York City, the son of Ida (Kaslow) and Daniel Lang, Jewish immigrants from Russia and Hungary. He attended public schools and studied at Townsend Harris High School. At the age of 15 he was admitted as a scholarship student to Swarthmore College, and received a B.A. in economics in 1938. He then received an M.S. from Columbia Business School in 1940. He studied mechanical engineering at the Brooklyn Polytechnic Institute from 1940-41. He was married to Theresa (née Volmar) Lang from 1946 until her death in 2008. They had three children: Jane Lang, David Lang, and actor Stephen Lang.

He created the I Have A Dream Foundation in 1981, Project Pericles in 2001, and the Lang Youth Medical Program in 2003. He has also made large donations to Swarthmore College, The New School’s undergraduate liberal arts college – Eugene Lang College – and the Eugene M. Lang Center for Entrepreneurship at Columbia Business School, which is part of Columbia University.

In 1986, Lang received the Award for Greatest Public Service Benefiting the Disadvantaged, an award given out annually by Jefferson Awards.

In 1996 President Bill Clinton awarded him the Presidential Medal of Freedom. His philanthropies, focused primarily on education, altogether exceed $150,000,000. Due to his philanthropy in education, he held 38 honorary degrees as of December 2012.