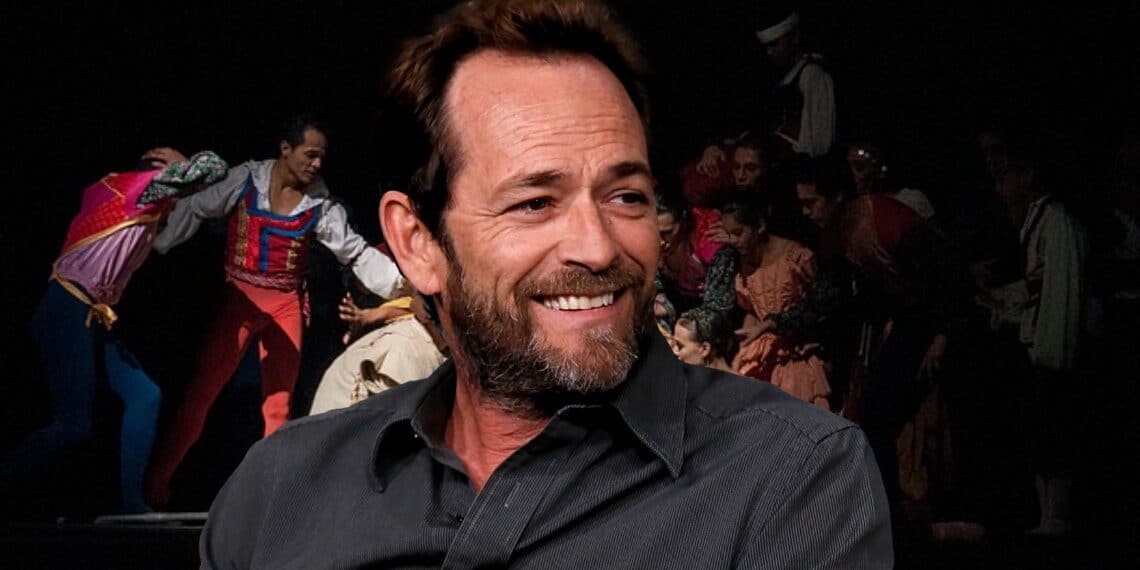 American actor Luke Perry is dead at age 52. Born on October 11, 1966, Perry became a teen idol for playing Dylan McKay on the TV series Beverly Hills, 90210 from 1990 to 1995 and from 1998 to 2000. Perry also starred as Fred Andrews on the CW series Riverdale. He also played guest roles on notable shows such as Criminal Minds, Law & Order: Special Victims Unit, and Will & Grace.

The late actor was born in Mansfield, Ohio, and raised in Fredericktown, Ohio. His mother, Ann Bennett, was a homemaker, and his father, Coy Luther Perry Jr., was a steelworker. There, Perry was the school mascot, the Fredericktown High School Freddie.

According to Perry’s publicist Arnold Robinson, Luke Perry died after suffering a massive stroke. His publicist added that actor Luke Perry passed away while surrounded by his children Jack and Sophie, fiancé Wendy Madison Bauer. Also, his ex-wife Minnie Sharp, mother Ann Bennett, step-father Steve Bennett, brother Tom Perry, sister Amy Coder, and other close family and friends. The family appreciates the outpouring of support and prayers extended to Luke from around the world and respectfully requests privacy in this time of great mourning, the publicist said.

Perry had moved to Los Angeles shortly after high school to pursue acting. He worked for an asphalt paving company and in a doorknob factory.

In the 1990s, Perry, in an interview with Whoopi Goldberg, said he auditioned for 215 acting jobs in New York before getting work on a television commercial.[citation needed] After appearing in the music video “Be Cool to Your Skull” for the band Twisted Sister alongside Alice Cooper, Perry’s earliest roles were in the daytime soap operas Loving (1987–88) and Another World (1988–89).

Following this, he won the role of the brooding millionaire’s son Dylan McKay on Fox’s teen drama Beverly Hills, 90210. He had initially auditioned for Steve Sanders but lost to actor Ian Ziering. While starring on 90210, Perry won a supporting role in Joss Whedon’s Buffy The Vampire Slayer (1992). During this period of the early 1990s, Perry became a favorite teen idol. He also starred in Terminal Bliss in 1992.

From 2017 until his death, the American actor Luke Perry starred as Frederick “Fred” Andrews, Archie’s father, on the CW series Riverdale.

Luke Perry – Wikipedia:
Perry starred as Lane Frost in 8 Seconds in 1994. In an attempt to find more mature roles, he decided to leave Beverly Hills, 90210 in 1995. In the same year, Luke Perry played himself in the Italian movie Vacanze di Natale ’95. Although he announced that 90210 was behind him, his departure would eventually last for only three years.

During that time, Perry starred in the independent film Normal Life opposite Ashley Judd, starred in the Television science fiction “Invasion (1997)”, and a Rodney King drama Riot (1997), and Perry had a small role in Luc Besson’s science fiction adventure film The Fifth Element (1997). In 1998 he returned to 90210 for financial reasons.[citation needed] Perry then starred in the 1999 film Storm and starred in a 2002 television movie called The Triangle.

From 2001 to 2002, he starred in the HBO prison drama Oz as the Reverend Jeremiah Cloutier. From 2002 to 2004, he starred in the post-apocalyptic TV series Jeremiah. In 2006 Perry co-starred in the ensemble drama series Windfall, about a group of friends who win the lottery. The series ran for 13 episodes during the summer of 2006 on NBC. In 2007 he landed the role of Tommy “Santa” Santorelli on the film The Sandlot: Heading Home, and he appeared in the 2008 western A Gunfighter’s Pledge.

Perry also appeared in the HBO series John From Cincinnati, which premièred on June 10, 2007, and ran for ten episodes; the series finale aired on August 12, 2007. He also starred in the Swedish film Äntligen Midsommar (Finally Midsummer), released in the summer of 2009.

He said of his role on Beverly Hills, 90210 as Dylan McKay: “I’m going to be linked with him until I die, but that’s just fine. I created Dylan McKay. He’s mine.” However, he did not reprise his role on the spin-off. He stated: “When you’re in the professional acting business, you have to look into all these offers, and I don’t mean anything bad about it, but creatively it’s something I have done before, and I don’t know how it will benefit me if I do it again.”

Perry finally revealed a significant reason why he did not want to be part of this revival, citing the show’s longtime producer Aaron Spelling: “The difference between CW bringing something back and Aaron Spelling doing something back is significant. And I cannot do it without Aaron.” However, Shannen Doherty, Jennie Garth, and Tori Spelling reprised their roles in the 2008 revival of the series.

Perry did considerable voice-over work for various animated series, often playing himself. He played himself (as Krusty the Clown’s half brother) in The Simpsons (1993). In an episode of Johnny Bravo, he voiced himself, giving Johnny dating advice after Johnny saved him from a stampede of fangirls. Perry parodied himself in an episode of Family Guy, in which he was labeled as gay by Peter and sued the family. His other voice work includes The Incredible Hulk, Biker Mice from Mars, Mortal Kombat: Defenders of the Realm, and The Night of the Headless Horseman.

Perry also guest-starred as gay characters in Spin City (1997) and Will & Grace (2005). He also appeared as Carter Heywood’s ex-boyfriend, who subsequently fell in love with a woman on Spin City and played a geeky birdwatcher who caught the eye of Jack McFarland on Will & Grace.

In 2005, Perry reunited former 90210 co-star Jennie Garth when he guest-starred on What I Like About You, a loose parody of their relationship with their 90210 characters. In late 2009, Perry starred in The Killers’ music video for their fourth annual Christmas single, “¡Happy Birthday Guadalupe!” in 2008, Perry guest-starred as rapist Noah Sibert in the television series Law & Order: SVU. He also guest-starred as cult leader Benjamin Cyrus in Criminal Minds.

Perry appeared on Broadway in 2001 in a revival of The Rocky Horror Show, playing Brad Majors.

In 2004, he appeared in the London production of When Harry Met Sally as Harry, alongside Alyson Hannigan as Sally.

Following his appearance in the stage adaptation of “When Harry Met Sally,” actor Perry was asked to reprise his role as Dylan McKay as a guest appearance 90210 show. He appeared as the American version of Inspector Space-Time in an episode of Community. In 2010 he played a con man/psychic in a second season episode of Leverage. Due to scheduling conflicts with Shannen Doherty, he was subsequently written out.

Perry returned to television in 2015 in the Up Network original series Detective McLean: Ties That Bind. He played Tim Olson, the brother of the lead character, who is arrested by his sister and sent to prison. Subsequently, the show revolves around his sister taking in his teenage kids. Perry also starred in the Hallmark Channel movie Love in Paradise in 2016.