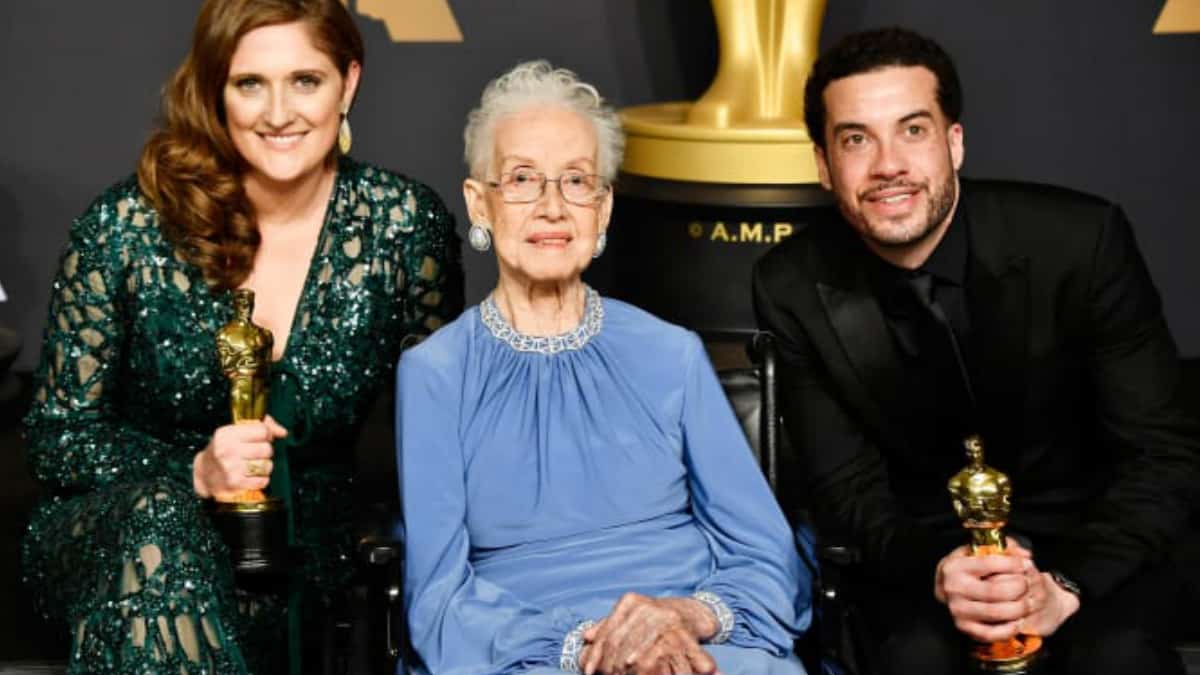 Katherine Johnson (Katherine Coleman Goble Johnson), born on August 26, 1918, and died on February 24, 2020. She was an American mathematician whose calculations of orbital mechanics as a NASA employee were critical to the success of the first and the subsequent U.S. crewed spaceflights. During her 35-year career at NASA and its predecessor, she earned a reputation for mastering complex manual calculations and helped pioneer the use of computers to perform the tasks. The space agency noted her “historical role as one of the first African-American women to work as a NASA scientist.”

Her calculations were also essential to the beginning of the Space Shuttle program, and she worked on plans for a mission to Mars. In 2015, President Barack Obama awarded Johnson the Presidential Medal of Freedom. Taraji P. Henson portrayed her as a lead character in the 2016 film Hidden Figures.

In 2019, Johnson got the Congressional Gold Medal award.

Obit Katherine Johnson, the pioneering African-American mathematician whose calculations ensured NASA’s astronauts safely set foot on the Moon in 1969, died today. She was 101.

Despite her top grades, though, she was unable to find a job in academia during a time when discrimination against African Americans was slowly seen. Instead, she became a school teacher. She then married her first husband, James Goble, in 1939, quit teaching, and attended graduate school at West Virginia University after she was chosen, alongside two men, to be the first black students there. But she dropped out a year later when she became pregnant and focused on her new family.

She turned to teach after giving birth to three daughters, Constance, Joylette, and Katherine, in all. Her career at NASA – known then as the National Advisory Committee for Aeronautics (NACA) – didn’t begin until 1953, after a relative told her the Langley Research Center in Virginia was hiring for the blacks-only wing of its computing section.

She joined as a temp and told to analyze data compiled from flight tests. Her permanent role came two weeks later after bosses recognized her mathematical abilities.

Her husband James died of a brain tumor in 1956, leaving her a single mother of three children at 38. In 1959, she married U.S. Army officer James Johnson, and their family grew to include six grandchildren and 11 great-grandchildren. Jim died last year, aged 93.

Katherine Johnson – Get the girl!

She continued to dedicate herself to her job, working long hours during the turbulent time of the Cold War and the Space Race. America threw significant resources at the task of sending humans into space to outdo the Soviet Union, which had just launched Sputnik, the first artificial satellite in 1957.

Katherine Johnson calculated the trajectory for America’s first human spaceflight that saw NASA’ naut Alan Shepard briefly leave Earth’s atmosphere in a Freedom 7 Mercury capsule in 1961. A year later, Johnson was called upon to double-check the workings of computers to make sure spaceman John Glenn would safely make it back to Earth after taking off in an Atlas LV-3B rocket.

Glenn didn’t entirely trust the machines to run the numbers: they were prone to errors and blackouts. He reportedly asked engineers to “get the girl,” meaning Johnson, to repeat the same trajectory calculations using nothing but a pen, a ruler, some paper, and a mechanical calculator. “If she says they’re good, then I’m ready to go,” he said. Glenn became the first American to orbit the Earth in 1962.

“I loved going to work every single day,” Johnson later said. She reckoned her best contribution to NASA was for the historic Apollo 11 landing. Her trajectory calculations, and backup navigational charts, ensured the project’s lunar lander, carrying Neil Armstrong and Buzz Aldrin, set down safely on the surface of the Moon.

During her time at NASA, Johnson published numerous research papers detailing new equations for figuring out the landing position of spacecraft. That moment marked the first time the space agency’s Flight Research Division had publicly given a woman credit as an academic author.

After 33 years of service, she retired in 1986. And despite her long and lustrous career, she remained relatively unknown outside of the field. In 2015, President Barack Obama presented her, at the age of 97, with the Presidential Medal of Freedom, America’s highest civilian award.

A year later, her life got depicted in Hidden Figures, the Hollywood film based on a nonfiction book, written by Margot Lee Shetterly, describing the careers of black female mathematicians in NASA during the Space Race.

“Our NASA family is sad to learn the news that Katherine Johnson passed away this morning at 101 years old,” Jim Bridenstine, NASA’s administrator, said on Monday. “She was an American hero, and men will never forget her pioneering legacy.