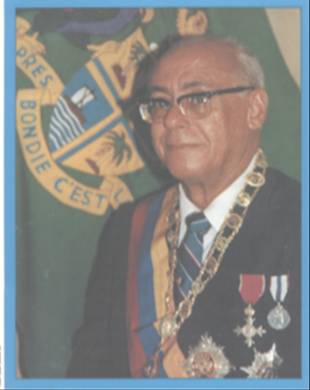 After a period of crisis in Dominica from 1979 when office of the President was severely tested due to a constitutional crisis, Clarence Seignoret was sworn in as President of Dominica in October 1983 and served two full five-year terms until 25 October 1993. As has been written in “The Dominica Story” (p.283), his election to the post “was really the first settled Presidential appointment that the island had enjoyed in four years of independence. From 1983 to 1993 Seignoret won the respect of all Dominicans for his disciplined yet easy style, the concern he took to educate the country on matters of protocol and his support for the cultural traditions of Dominica and defence of its natural environment.”

Knighted by Queen Elizabeth II during her visit to Dominica on 25 October 1985, Sir Clarence was also awarded the Dominica Award of Honour by the State in 1994 on the completion of his two terms as President. Other honours included the Order of the Liberator granted by Venezuela in 1987 and being created a Knight of Malta in 1992. From the 1960’s, in his spare time, he worked a small farm on land he had purchased near Pont Casee, a pastime that he found a relaxation from the pressures of the senior civil service and where he could enjoy the natural gifts of Dominica that he so loved.