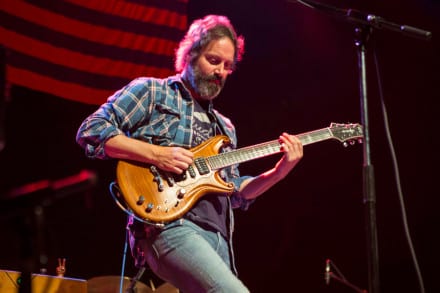 “It’s with great sadness that we tell you our brother Neal Casal has passed away,” Calabro wrote. “As many of you know, Neal was a gentle, reflective, deeply soulful human being who lived his life through artistry and kindness. His family, friends, and fans will always remember him for the light that he brought to the world. Rest easy Neal, and we love you.”

According to Billboard, Neal Casal died by suicide.

Billboard quoting a source, Casal was”struggling on and off for the past year” with some personal issues. His family and friends were helping him work through his problems. Casal had been in the studio last week with Circles Around The Sun recording a new studio album. Over the weekend they performed a well-received set at the LOCKN’ Festival in Arrington, Virginia. “It appeared he was in the right headspace.

On Monday, however, he went home and stopped returning calls and texts from friends.” Quoting the source Billboard writes in the evening of Monday, August 26 the body of Casal they discovered his body.

The folk-influenced rocker and photographer was born in Denville, New Jersey, on November 2, 1968. He began releasing solo albums in 1995 with Fade Away Diamond Time, the first of a dozen poetic, Americana-style solo efforts he released through 2011’s Sweeten the Distance. He formed the trio Hazy Malaze in 2002, releasing three albums with bassist Jeff Hill and drummer Dan Fadel before joining Ryan Adams’ band. The Cardinals, in 2005, touring with the group and appearing on five albums, including 2007’s Easy Tiger and 2011’s Class Mythology.

Beginning in 2012, he toured and recorded with former Black Crowes singer Chris Robinson’s band. The Brotherhood, appearing on a dozen albums, including 2012’s Big Moon Ritual and this year’s Servants of the Sun. Casal’s fluid, expansive playing was featured on albums by a wide variety of other acts, including Smashing Pumpkins guitarist James Iha’s 1998 solo debut, as well as works by Lucinda Williams.

Gone but not fogotten