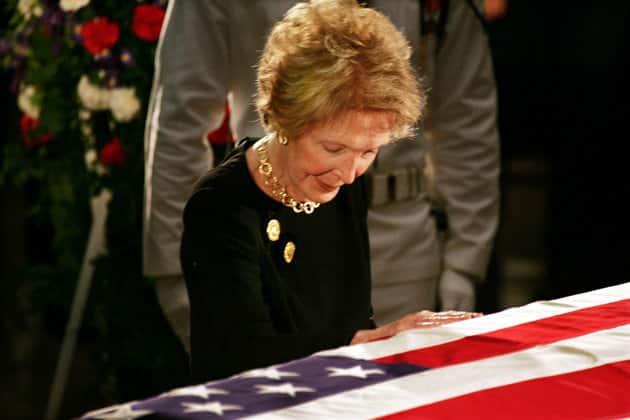 WASHINGTON, DC - JUNE 9: (NO U.S. TABLOID SALES) Former first lady Nancy Reagan touches the casket of her husband, the 40th President of the United States, Ronald Reagan as he lies in state inside the Rotunda of the U.S. Capitol June 9, 2004 in Washington, DC. (Photo by David Hume Kennerly/Getty Images)

The news was first reported by the website TMZ, citing a “close family member,” and confirmed by a spokeswoman. The Reagan Library said in a statement that the cause of death was “congestive heart failure.”

The widow of former President Ronald Reagan had been hospitalized in October 2014 with a fractured pelvis.

She served as first lady from 1981 to 1989 and was known for her work in combating youth drug abuse through the “Just Say No” campaign.

She was born Anne Frances Robbins on July 6, 1921, in New York City. When her stepfather adopted her in 1935, she took his last name of Davis. She majored in theater at Smith College in Massachusetts.

In 1951, she met her future husband when he was president of the Screen Actors Guild and she was a Hollywood actress billed as Nancy Davis. They married in Los Angeles in 1952 and had a daughter, Patti Davis, and a son, Ron Reagan.

“My life really began when I married my husband,” Nancy Reagan often said. She even referenced the quote in her 1989 book My Turn.

After the wedding, Nancy Reagan appeared in only a few more films, including “Hellcats of the Navy” (1957), which also featured her husband.

“Ronnie,” as she affectionately called him, served as governor of California from 1967 to 1975. During that time, Nancy Reagan supported veterans groups and advocated for the Foster Grandparent Program, which brings together older Americans with children who have physical and emotional handicaps. She drew national attention to the program once her husband was elected to the White House.

As first lady of the United States, Reagan also launched a campaign to fight drug and alcohol abuse among youth. The refrain “Just Say No” became synonymous with those efforts and a pop culture watchword. The first lady appeared repeatedly on TV and enlisted more established groups to advance the anti-drug message. “Just Say No” clubs were started nationwide in schools and elsewhere. Critics, however, argued that the “Just Say No” approach to the drug war was too simplistic.

Reagan was also mockingly dubbed “Queen Nancy” for what many viewed as excessive spending during the 1981-82 recession, according to the National First Ladies’ Library. She directed major repairs and redecoration in the White House, which hadn’t been done since renovations in the 1960s, and purchased new china. Though Reagan paid for the upgrades with private donations, many Americans criticized her. Her elegantly expensive wardrobe, often donated by the designers, sparked criticism as well.

She caught flak for being overly involved in her husband’s administration, particularly in the hiring and firing of top advisers. A number of memoirs from those who worked for the Reagans said that Nancy Reagan pushed out those she perceived as detrimental to her husband.

One White House chief of staff, Donald Regan, said in his 1988 book that he was fired after disagreeing with her over what the president should do during the Iran-Contra scandal. “She becomes very vindictive if she thinks somebody is going to harm the reputation of her husband or herself, or won’t give in to her,” he said at the time, according to People magazine.

Regan’s book also revealed that Nancy Reagan had begun consulting an astrologer to deal with her own fears over her husband’s safety after the March 1981 assassination attempt. Shot in the chest, the president underwent emergency surgery to save his life. Regan wrote that in later years, the first lady required major decisions regarding the president’s schedule to be run past the San Francisco fortune teller.

After President Reagan’s second term, the couple returned to Los Angeles. In 1994, the former president announced he had Alzheimer’s disease. Nancy Reagan, who had been diagnosed with breast cancer and had a mastectomy in 1987, cared for her husband until he died on June 5, 2004.

Following her husband’s death, Reagan became a strong advocate of using stem cell research to learn more about Alzheimer’s and other diseases.

In her book I Love You, Ronnie, Nancy Reagan recalled her husband’s final illness:

“We’ve had an extraordinary life … but the other side of the coin is that it makes it harder. There are so many memories that I can no longer share, which makes it very difficult. When it comes right down to it, you’re in it alone. Each day is different, and you get up, put one foot in front of the other, and go — and love; just love.”