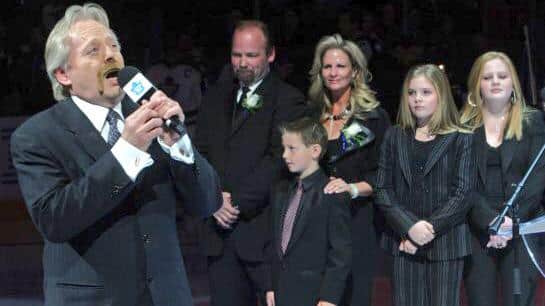 TORONTO – His powerful voice enthralled theatre and sports fans alike, and on Tuesday, stars from both worlds offered a chorus of tributes to tenor Michael Burgess.

The musical theatre star — who left audiences spellbound as Jean Valjean in “Les Miserables” and became well-known to hockey fans for his stirring renditions of “O Canada” — died Monday after a lengthy battle with cancer.

On Tuesday, salutes poured in from musical and sports giants: Mirvish Productions, the Toronto Maple Leafs, the Canadian Baseball Hall of Fame and Museum, the Royal Conservatory, the Toronto Blue Jays, and individual athletes including former NHLer Darryl Sittler.

Sittler’s most cherished memory was of Burgess singing “I Love You Forever” at his wife’s funeral after she died of cancer in October 2001.

“He made a special trip in from where he was on tour at that time to come and do it,” said Sittler, who added that his wife Wendy was listening to the song when she passed away in their home, surrounded by Darryl and their three children.

“He’s been a special friend.”

Friends recalled a classically trained vocal powerhouse who loved hockey, baseball and golf as much as his musical theatre standards.

He famously belted out the national anthem at Toronto Maple Leafs home games for many years. Retired NHLer Darcy Tucker tweeted that Burgess’s “O Canada” “always made me feel a foot taller and (put) chills in my spine.”

“He sang a lot of the big games,” added Sittler.

“When it was a big game Montreal-Toronto or when it was a playoff game or an inspirational game that was on the line, Michael Burgess was the guy that they would call on to sing.”

Burgess was also the first person to sing “O Canada” at a World Series baseball game when the Blue Jays played the Atlanta Braves in 1992. Blue Jays president Paul Beeston said he was “saddened by the loss of one of Toronto’s greatest voices.”

“Michael was an inspiration to all Canadians as his presence spread across sports, theatre and music,” Beeston said in a release.

“He wanted to hang on to see it happen this year, I gotta tell you that much,” said Warrack.

“We almost figured if there was anything that was going to keep him alive at this point, that would be it.”

Before the hockey arenas, it was “Les Miserables” that catapulted Burgess to fame.

Burgess dazzled audiences in the role of Jean Valjean, leading a local cast in a mega-production that helped define live theatre in Canada.

The Regina-born Burgess played the role in more than 1,000 performances of “Les Miserables” at Toronto’s Royal Alexandra theatre and on the cross-Canada tour.

“The Canadian theatrical industry is very fractured …. it’s hard to become famous across Canada as a stage actor. It’s really, really hard,” said fellow theatre star Rebecca Caine, who joined Burgess and Warrack on a concert tour that ended in the spring of 2013.

“I think Michael (gained fame) with the touring of ‘Les Mis,’ but mainly he was known for singing the hockey anthems, that was the root of his fame, singing an absolutely terrific ‘O Canada.'”

Warrack said Burgess developed close friendships with several former NHLers by joining in their “legends” tours and charity events, taking to the ice at times with his hockey pals.

“He had at least three families — he had his personal family, he had his show business family and he had his hockey family. And they were all extremely important to him,” said Warrack, who met Burgess in 1970.

Retired hockey star Paul Coffey got to know the singer through charity events and casual shinny games and recalled he was generous with his time.

“Michael was a tough guy not to like,” said Coffey.

Meanwhile, the National Arts Centre in Ottawa was to fly its flags at half-staff in memory of the tenor.

Caine said Burgess’s health was in clear decline when she last saw him two years ago, noting he had grown thin and “fragile.”

“He was really sick. But the thing was he was so stoical, he never spoke of it, he never mentioned it. And it was very obvious to see what the cancer had done to him was terrible, and how he managed to sing and he never complained about it,” she said.

“I mean, we didn’t talk about it, it was almost the elephant in the room, in a way. And I had great admiration for him for just keeping going the way he did. And doing some beautiful singing at the same time.”

By Cassandra Szklarski, The Canadian Press

Michael Burgess, (July 22, 1945 – September 28, 2015) was a popular Canadian actor and tenor … He is also known in Canada for his frequent vocal performances of national anthems; he was the first … He married fellow Les Misérables performer Susan Gilmour on October 8, 1994. … “Mr & Mrs Miz”, Toronto Star, p. C2.

Our thoughts are with the family and loved ones of tenor Michael Burgess who passed away at 70 today.