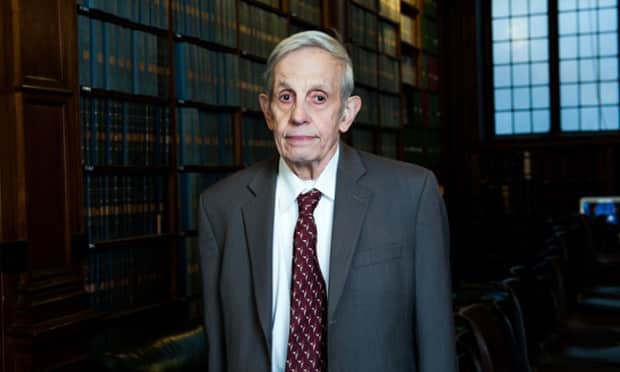 John Nash, mathematician portrayed in A Beautiful Mind, dies in taxi crash at 86

John Nash, the Nobel prize-winning mathematician whose life story inspired the film A Beautiful Mind, was killed with his wife Alicia in taxi cab crash in New Jersey on Saturday night, police said.

Nash, 86, was a senior mathematician at Princeton University in New Jersey. He and Alicia, 82, were traveling on the New Jersey Turnpike when their driver lost control, NJ.com quoted state police sergeant Gregory Williams as saying. The cab hit a guardrail and the couple were thrown from the vehicle.

The cab driver and a passenger in a second vehicle were treated for non-life-threatening injuries, according to reports.

Russell Crowe, who starred as Nash in the 2001 movie, which won four Academy Awards including best picture, tweeted his condolences on Sunday morning.

Nash was born on 13 June 1928, in Bluefield, West Virginia, to a father who was an electrical engineer and a mother who was a schoolteacher. In an autobiographical essay submitted to the Nobel committee, Nash described his early curiosity in mathematical problems.

Harvard invited Nash to join its mathematics department as a doctoral student, but Princeton offered superior terms, and so Nash matriculated in 1948. In just two years he had completed the work on non-cooperative games that would be recognized with a Nobel prize in economics 40 years later.

“By the time I was a student in high school I was reading the classic Men of Mathematics by ET Bell and I remember succeeding in proving the classic Fermat theorem about an integer multiplied by itself p times where p is a prime,” Nash wrote.

Harvard invited Nash to join its mathematics department as a doctoral student, but Princeton offered superior terms, and so Nash matriculated in 1948. In just two years he had completed the work on non-cooperative games that would be recognized with a Nobel prize in economics 40 years later.

“This paper introduces the concept of a non-cooperative game and develops methods for the mathematical analysis of such games,” the paper begins. “The main mathematical result is the proof of the existence in any game of at least one equilibrium point.”

The promise of Nash’s immense early achievement was shattered, however, in the ensuing 10 years, when he was overcome with a mental illness that was diagnosed in 1959 as paranoid schizophrenia.

“The mental disturbances originated in the early months of 1959 at a time when Alicia happened to be pregnant,” Nash wrote in the Nobel essay. “And as a consequence I resigned my position as a faculty member at MIT and, ultimately, after spending 50 days under ‘observation’ at the McLean Hospital, travelled to Europe and attempted to gain status there as a refugee.”

In news coverage of the Nobel, the journalist Sylvia Nasar, who would go on to write A Beautiful Mind, the book upon which Ron Howard’s film was based, described Nash’s struggle.

“He didn’t die, but his life, once so full of brightness and promise, became hellish,” Nasar wrote.

In the essay, Nash describes thinking himself out of his illness.

“After my return to the dream-like delusional hypotheses in the later 60s I became a person of delusionally influenced thinking but of relatively moderate behavior and thus tended to avoid hospitalization and the direct attention of psychiatrists,” Nash wrote.

“Thus further time passed. Then gradually I began to intellectually reject some of the delusionally influenced lines of thinking which had been characteristic of my orientation. This began, most recognizably, with the rejection of politically oriented thinking as essentially a hopeless waste of intellectual effort.”

Alicia Nash, an MIT physics major when the pair met, divorced the mathematician in 1963 but continued to care for him during his illness, which prevented John Nash from working for decades. He resumed professional contacts in the 1980s; the couple remarried in 2001.

Among the high-profile tributes pouring in for Nash came one from the US National Security Agency, which was recipient of unsolicited letters from Nash in the 1950s about encryption techniques. The letters have been preserved in a museum exhibit at the NSA.

“NSA is saddened by the loss of famed mathematician John Nash,” the agency said on its official Twitter account.

Last week, Nash received a $500,000 Abel prize, one of the top lifetime achievement honours in mathematics, with the New York University mathematician Louis Nirenberg. The prize was given for the two men’s work on partial differential equations, which are used to describe change, movement and velocity.

Nirenberg said Nash was a truly great mathematician and “a kind of genius”.