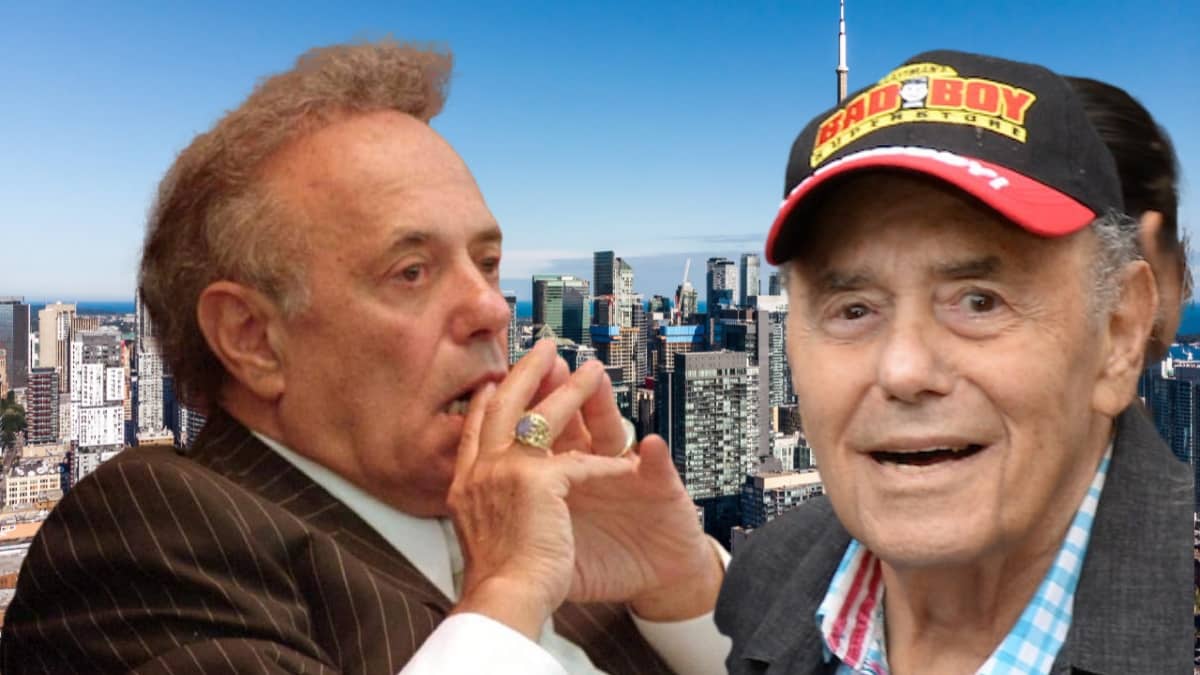 Ford wrote, “Mel Lastman was a true leader and builder for (the City of Toronto.) He was a great mayor, and he touched many lives”.

A staunch defender of all things Toronto, the diminutive Mayor Mel wore his love for the city on his sleeve during a raucous six-year reign as Mayor, which followed ten consecutive terms — 25 years — as the Mayor of the suburb of North York.

Current Toronto Mayor John Tory, who helped Lastman win his bid for “megacity mayor” in 1997, said flags would be lowered to half-mast in the late Mayor’s honour.

“He was a kind, good-hearted man with a larger-than-life personality who always wanted to do the right thing for people,” Tory said in a statement Saturday night.

Lastman’s shoot-from-the-lip style earned him a reputation as a lovable bumbler who summoned the army during a snowstorm, pleaded with the Spice Girls to stay together, and even threatened to kill a journalist.

But none of it — the bug-eyed rants, the off-colour remarks, the illicit affair with a woman who claimed her two 40-something sons were his illegitimate children — seemed to diminish Lastman’s popularity.

In 2001, with the world’s eyes on Toronto’s bid to host the 2008 Olympic Games, Lastman told a newspaper he was apprehensive about a diplomatic trip to Kenya because of his fear of snakes.

“What the hell would I want to go to a place like Mombasa?” he later said. “I just see myself in boiling water with all these natives dancing around me.”

The 2008 Games went to Beijing. Whether Lastman’s remarks had anything to do with the decision remains a lingering debate.

Lastman’s reputation went global in 2003 when Toronto was in the grips of a deadly SARS outbreak. The city’s tourism industry suffered a major blow when the World Health Organization warned people away.

Also, at the height of the crisis, Lastman’s public appearances bordered on the bizarre when he got his facts wrong on CNN and knew nothing about how many people in the city were in quarantine or had SARS symptoms. When the discussion turned to W.H.O., Lastman knew nothing about the international health agency at the heart of the controversy.

“Who did they talk to? They’ve never been to Toronto. They’re located somewhere in Geneva.”

Officials in Lastman’s office hailed the appearance as a victory as the “little fireplug of a mayor” assured the world Toronto was safe to visit.

During a string of massive snowstorms in January 1999, Lastman — fearing his city’s snow-removal equipment to be inadequate — summoned the Canadian Forces to help Toronto deal with more than 100 centimetres of snow.

No major problems required the brute force of the 400 soldiers who answered the call, which used armoured all-terrain vehicles to ferry blood supplies to hospitals and clear the way for emergency vehicles.

In June 1998, Lastman was again making headlines. Alarmed at the prospect of a Spice Girls breakup, he wrote a letter to Ginger Spice, a.k.a. Geri Halliwell, urging her to settle her spat with the rest of the blockbuster pop act.

“Please get over your differences and make your appearance in Toronto with the rest of the band members,” Lastman wrote on personal letterhead featuring a cartoon sketch of the curly-headed mayor tap dancing and singing above the maxim, “There’s No Business Like Show Business.”

“Many of your fans were devastated when you cancelled your appearance.”

Plans for a public appearance by the group fell through when they came to Toronto for their concert without Halliwell, and Lastman took it as a personal snub, refusing to meet them.

“They haven’t done anything for Toronto. Why should I be giving them keys to the city?” he said.

There was no shortage of spice in Lastman’s personal life in 2000, when he admitted to having had a 14-year affair with Grace Louie, a married employee of his furniture store, which ended in 1974.

Louie launched a civil action against Lastman, seeking child support for her sons Kim and Todd; then, in their 40s, she alleged Lastman fathered her during their lengthy affair.

The court later dismissed the $4.5-million civil action because Louie waited 30 years to bring her claim forward. Lastman never confirmed or denied being the father but did admit to paying Louie $27,500 in 1974 to keep quiet about the affair.

Lastman’s wife Marilyn, his childhood sweetheart, stuck by him through the ordeal. She died in January 2020.

The pair were known in the city for throwing flashy parties, including a bar mitzvah for their son Dale that saw a posh downtown hotel transformed into the court of King Arthur, complete with moat.

But Lastman had humble, working-class beginnings before becoming the flamboyant millionaire mayor of Toronto.

He grew up poor, becoming a threadbare salesman before borrowing $2,000 to open an appliance store. He eventually transformed into furniture giant Bad Boy, which has seven locations across Ontario.

In his post-mayoral days, Lastman could be seen in Bad Boy commercials alongside son Blayne, who re-launched the chain in 1991, shouting its notorious slogan with an “OK” sign and an exaggerated wink: “Who’s Better than Bad Boy? Noooooobody!”

It wasn’t always Lastman’s words that got him into trouble.

In January 2003, at the height of public concern about the proliferation of criminal biker gangs, Lastman was photographed shaking hands with a Hells Angels member. Insisting he never met a hand he wouldn’t shake, he blamed the media for blowing the incident out of proportion.

Despite the pratfall-prone facade, Lastman was a salesman extraordinaire who never stopped shilling for Toronto, winning the overwhelming support of voters who gave him 80 percent of the popular vote in the 2000 municipal election.

A staunch defender of Toronto’s interests, Lastman often revelled in his funding battles with the province and Ottawa, even publicly musing about mounting a campaign to separate Toronto from Ontario.

But Mayor Mel got what he wanted: Harris eventually offered the city a $50-million grant and $200 million in interest-free loans.

“Nobody likes to cut programs, and nobody likes to increase taxes. But the provincial and federal governments left us no choice,” Lastman said during a state-of-the-city address in 2001.

“Toronto doesn’t get a damn thing, and it’s time that changed.”

In a 2013 interview with The Canadian Press, he reminisced about his mayoral legacy. He said he not only sold Toronto to the world but to Torontonians themselves, instilling in them great pride in their city.

“I think that’s something that has been lacking before I became mayor and after I left,” Lastman said.

“They should be selling it over again and telling people how lucky they are to live in a multicultural city like this. The diversity of Toronto is unbelievable to what it was. You think back; everybody spoke English wherever you went. Today you hear all different languages no matter where you go — on the subway, on the bus, on the street, a restaurant, no matter where you are — and it sounds great.”

This report from The Canadian Press was first published on December 11, 2021.

Mel Lastman was born Melvin Douglas Lastman on March 9, 1933, and died on December 11, 2021. He carried the nickname “Mayor Mel” or “Mega-City Mel,” a Canadian businessman and politician who served as the 3rd mayor of North York from 1973 to 1997 and the 62nd mayor of Toronto from 1998 to 2003. He was the first to serve as Mayor of Toronto following the 1998 amalgamation of Metro Toronto and its six constituent municipalities. Lastman is also known for founding the Bad Boy Furniture chain.