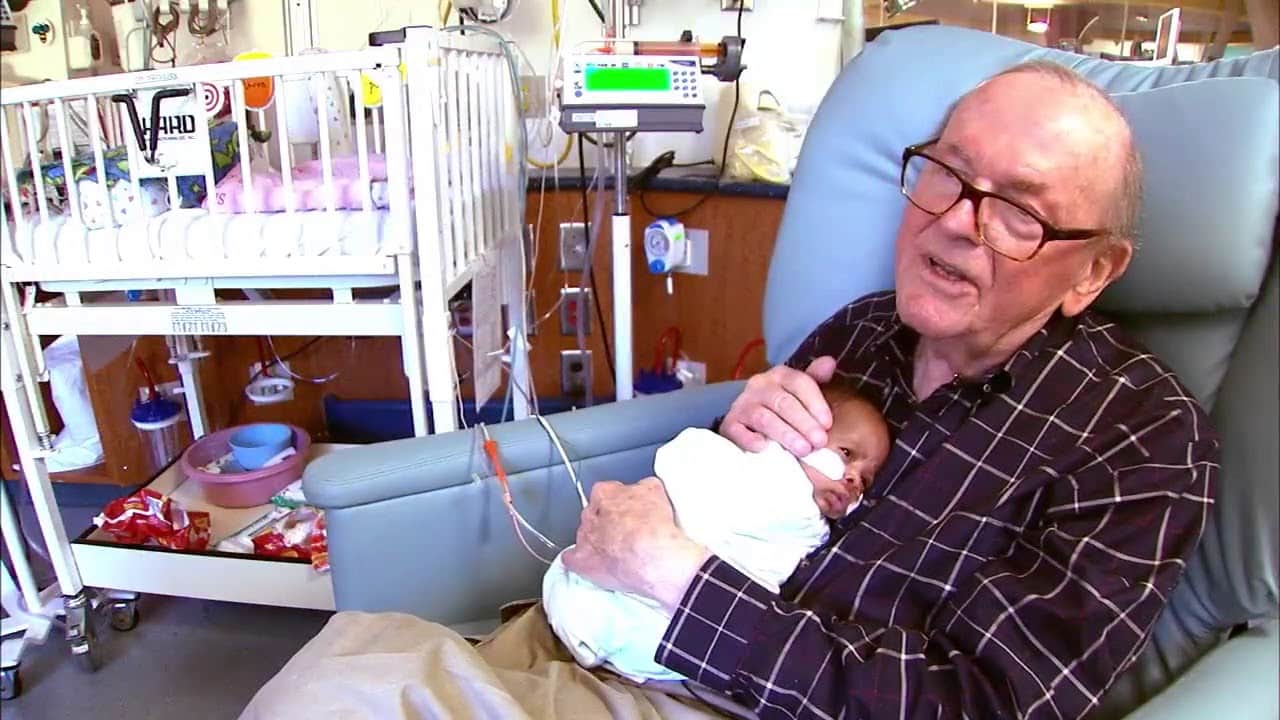 Dead at 86 is ‘ICU Grandpa’ who won hearts by snuggling babies, dies from pancreatic cancer.

ICU Grandpa story: For nearly 15 years, David Deutchman — aka the “ICU Grandpa” — cuddled babies in the neonatal intensive care unit and played with ailing toddlers as a volunteer at Children’s Healthcare of Atlanta. His efforts to help overwhelmed parents and sick children went viral several years ago; people loved hearing about his kindness toward others when they needed it most.

Deutchman died at age 86 on Nov. 14, just two and a half weeks after being diagnosed with stage IV pancreatic cancer. His family can’t believe he’s gone, but they say they know his legacy will live on for years to come.

“Volunteering enriched his life,” Deutchman’s daughter, Susan Lilly, 55, of Telluride, Colorado, told Parents TODAY. “The most meaningful part was the actual time he spent with these patients and their families.”

“He had a very successful business career, and I’ve never heard him talk with such appreciation and love for what he was doing any time during his 41 years with the company as he talked about his involvement with the people at the hospital.”

Deutchman began volunteering after he retired from a career in marketing. He found that he had too much free time and wanted to keep busy. One day, he was at a nearby rehab facility when he saw Children’s Healthcare of Atlanta and popped in to see if he could volunteer. After some training, his second act as “ICU Grandpa” began. While families often sought him out because he was so popular, he felt as if he was the one who gained the most from his time there.

“He said, on many on many occasions, ‘I don’t know how much people realize how much more I get out of this than what I put in,'” Lilly said. “(He’d say) ‘You know, I get feedback from families how much they appreciate me, but I appreciate them.'”

Deutchman loved holding the babies or playing with the older children, his daughter said. He understood that exhausted parents and families benefited from knowing he was there.

“The emotional support he was able to provide for primary mothers, but also many of the fathers and extended family members, brothers, sisters, grandmas, grandpas, (was important). He was almost like a clergy member or a social worker,” Lilly said. “Even the nurses confided in him.”

Volunteering inspired and motivated him.

“This was a new purpose for him and something that enriched his life,” Lilly said. “It brought us great pleasure to see him having that impact. Why not share his love with people who could use it at their most vulnerable times?”

Deutchman often kept tabs on babies and their families for years. If they returned to the hospital, he’d try to visit them.

“He would go back (to the hospital) even if it wasn’t during one of his days that he volunteered — especially if they had to have a certain procedure,” Lilly said. “He would go in and hold their hands or hold them.”

When Deutchman turned 85 in November 2019, his energy began waning, and he considered retiring from the volunteer position he loved so much. Then the COVID-19 pandemic began, and the volunteer program got put on hold, allowing for a natural exit. As the months progressed, he became weaker before visiting his doctor on Oct. 27 to get some answers.

The next day he learned he had metastatic pancreatic cancer. Doctors encouraged him to start hospice care.

“None of us expected to get such a dire diagnosis,” Lilly said. “He made it very clear to all his loved ones and even his friends that he feels grateful to have lived a full and rich life.”

Before his death, Children’s Healthcare of Atlanta arranged a parade to cheer Deutchman and his family up.

“We appreciate the outpouring of support,” Lilly said.

Deutchman is survived by his wife of 58 years, Ronnie; his daughters, Susan Lilly and Jill Deutchman; and his grandchildren and great-grandchildren. Lilly said that she and her sister were not surprised that their father was so popular among the hospital families. He’s always been a great listener.

Lilly decided to take after her father and become a volunteer emergency medical technician. She said she believes others can learn from her father’s example as well.

Anyone can have a purpose at any stage of their lives,” she said. It was maybe surprising just how much her dad got out of his doings. “Volunteerism and being of service to others is deeply rewarding,” she added.