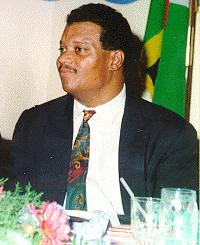 Dominica and the sporting fraternity mourned the death of businessman and sports enthusiast Ninian Marie. Known to most Dominicans as the little man with a big heart, he was a man of all seasons a man of many reasons. Mr. Marie died at the Princess Margaret Hospital on Monday October 7th, after a prolonged illness of liver problems.

Mr. Marie will never be forgotten and will long be remembered for his contribution to the development of cricket on the island, and other sports here. He was the man behind the organisation of the Harris Paints Sunday cricket league in the north of Dominica. A member of the Saints sports club, and one who played cricket at a local level for several years. He also played lawn tennis and once held the title of Dominica’s champion. Marie was the force behind the organising of the Harris Paints Domino competition.

The prasies for Marie’s work in sports and his contribution in other areas seem to have no end, so for Emile Lancelot, the journalist, Vice President of the Dominica Cricket Association and Secretary of the Dominica Association of Catholic Men, an association which recently re-elected Mr. Marie to hold the reigns of President just two days before his death, described Mr. Marie as a true friend and a dedicated individual to sports on the island.

And for sports co-ordinator Ossie Savarin, the news came as a shock to the Sports Division.

There is a saying, “give me my followers while I am alive”, but the norm seems to be after I am gone. So, once more an outstanding personality cannot hear the follower voices; Ninian Marie, after his death – like everyone else, the out spoken-man followers came after his death. Ninian is gone but cannot be forgotten by those who knew him well. Another of Mr. Maire admirer is the past President of the Dominica Cricket Umpires Association Phillip Alleyne who had a good relationship with Marie. He said, together they played a vital role in the development of cricket on Dominica.

And Mr. Marie will also be remembered by Secretary of the Dominica Lawn Tennis Association Thomas Dorset as Dominica’s Tennis champion.

Ninian Marie coloured Dominica with the lint’s of the Company’s paints which he introduced to this country as a result of his enterprising endeavour to the field of manufacturing and commerce.

From a humble beginning of store clerk/slaesman, to the top match of one of Dominica’s Premier Industries. He created jobs for many Dominicans and alleviated the plight of the poor and needy islandwide.

He was instrumental in the formation of the Catholic Men’s Fellowship, and was the inspiration to many who saw him as a model citizen.

The Dominica Cricket Association Secretary Emmanuel Nanthan who also played in the Harris Paints Sunday League says Marie could be seen as a stalwart in local cricket development.

And sports enthusiast and politician Pat Stevens took some time on radio to look at the life of a man who will remain in the minds of Dominicans for a very long time.

For the Former Sales and Marketing Manager of Harris Paints, Jonathan St. Jean, who recently ended employment with Harris Paints about two months ago, described Marie a dear friend and colleague.<

Ninian Marie has begun the one way try to the great beyond. His family, friends, the industrial and commercial sector, sports, the church, the poor, Dominica on a whole will mourn the loss of a distinguished son of the soil, Ninian Marie.

His journey on this world was short, but his impression will leave a mark never to be obliterated from annals of this country.

Mr. Marie was married and had three dauthers. He died at the age of 50-years

Many thanks to DBS’ Sports staff Ivona Jno Baptiste and Ferdina Frampton for getting most of the material on Mr. Marie together: