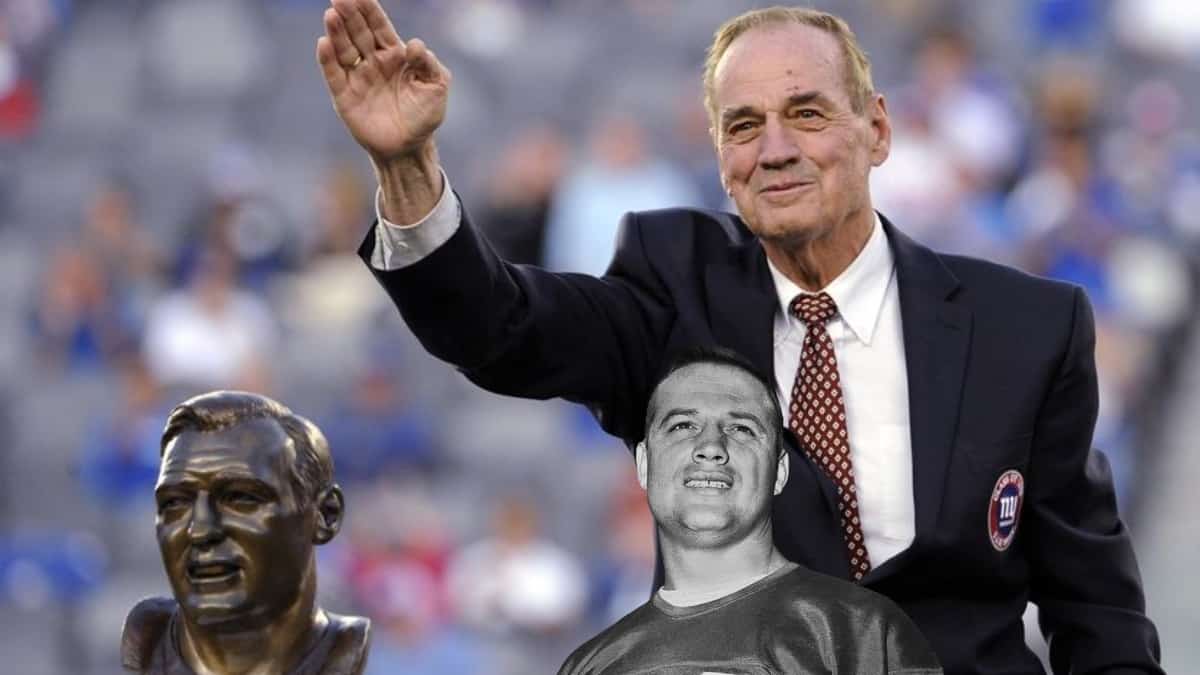 Sam Huff, the Hard-hitting Hall of Fame linebacker, dead at 87

Sam Huff, the hard-hitting Hall of Fame linebacker who helped the New York Giants reach six NFL title games from the mid-1950s to the early 1960s and later became a popular player and announcer in Washington, died Saturday. He was 87.

Sam Huff always will be remembered as the furious middle linebacker in a 4-3 scheme developed for him by fellow Hall of Famer Tom Landry, his defensive coordinator with New York, and later the architect of the Dallas Cowboys’ rise to power.

“Sam was one of the greatest Giants of all time, and he was the heart and soul of our defense in his era. He almost single-handedly influenced the first chants of ‘Defense, defense’ in Yankee Stadium,” team president John Mara said in a statement.

Huff’s major regret was winning only one of his title games, the championship in his rookie season when the Giants crushed the Chicago Bears 47-7 at Yankee Stadium.

Sam Huff was selected as the NFL’s top linebacker in 1959. He went to five Pro Bowls, four with the Giants and one with Washington.

“Anyone who knew Sam knew what an amazing person he was,” Washington owners Dan and Tanya Snyder said. “He was an iconic player and broadcaster for the franchise for over 40 years and was a great friend to our family. He represented the franchise with honor and respect on the field in the booth and was beloved by our fans.”

The baby-faced Huff became the first NFL player featured on the cover of Time magazine, appearing on November 30, 1959.

“The Twentieth Century,” a documentary television program hosted by Walter Cronkite on CBS that began in the late 1950s, once broadcast a piece on him entitled “The Violent World of Sam Huff.” Huff wore a microphone during practice and an exhibition game for the piece.

Drafted out of West Virginia in the third round in 1956, Huff played for New York from 1956-63. He was traded to Washington before the 1964 season and played there for the next four seasons. He retired after the ’67 season, sat out the following year, and returned for a final season in 1969 as a player coach under Vince Lombardi.

When Huff was inducted into the Pro Football Hall of Fame in 1982, he said football players can’t be discouraged and will not quit, even if beaten in a game. He believed in fair and hard play.

“He may not be an all-American, but he is an example of the American way,” Huff said in his induction speech. “He is judged not for his race, nor his social standing, or not for his finances, but by the democratic yardstick of how well he blocks, tackles, and sacrifices individual glory for the overall success of his team.”

After his playing days ended, Huff found another career behind the microphone.

Huff spent three seasons working as a color commentator for the Giants on the radio before moving over to a similar job with Washington, where he spent 38 years calling games, starting in 1975.

From 1981-2012, his longtime broadcasting partner was a former Washington teammate, quarterback Sonny Jurgensen. They called all three of Washington’s Super Bowl titles.

Huff was an every-down linebacker. He had the determination and strength to take on power running backs of that time and had the speed to cover backs on pass routes. He had 30 interceptions, 17 fumble recoveries, and five touchdowns.

Coming out of college, Huff didn’t have an easy transition to the NFL. The Giants initially used him as an offensive lineman tackle — hence the No. 70 he always wore.

Huff didn’t feel comfortable there, and shortly after training camp opened in 1956, he got fed up and left. Lombardi, then a Giants assistant coach, caught him on the way to the airport and convinced him to come back, suggesting it would be better than the coal mines of West Virginia.

Landry eventually developed a 4-3 defense, which was a better fit for the mobile Huff, and he was switched to middle linebacker behind Ray Beck. Landry used to have the rookie come to his apartment in New York, and they would spend nights discussing defenses.

Huff learned and developed an ability to read plays and disrupt them. When Beck was hurt on October 7, 1956, Huff took over, and the rest became part of his Hall of Fame story.

Robert Lee “Sam” Huff was born in a mining camp in Edna, West Virginia, on October 4, 1934. His father and two brothers worked in the coal mines, and he lived in a small rowhouse with no running water.

Sam Huff was a two-way lineman in high school and went to West Virginia, where he played guard as a sophomore and tackle in his final two years.

After retiring as a player, Huff coached for a year with Washington in 1970. He soon took a job in marketing with Marriott and worked until 1998.

After leaving the NFL, Huff took a position with J.P. Stevens in New York City as a textiles sales representative. He later joined the Marriott Corporation as a salesman in 1971, rising to vice president of sports marketing before retiring in 1998. While with Marriott, Huff was responsible for selling over 600,000 room nights via a partnership between the NFL and Marriott that booked teams into Marriott branded hotels for away games. In the late 1950s and early 1960s, he was a spokesman for Marlboro cigarettes.

After retiring from football, Huff spent three seasons as a color commentator for the Giants radio team and then moved on in the same capacity to the Redskins Radio Network, where he remained until his retirement at the end of the 2012 season, calling games alongside former Redskins teammate Sonny Jurgensen and play-by-play announcers Frank Herzog (1979–2004) and Larry Michael (2005–2012). He was also a broadcaster for a regionally syndicated TV package of Mountaineer football games in the mid-1980s.

In 1999, Huff was inducted into the National High School Hall of Fame and was ranked number 76 on The Sporting News’ list of the 100 Greatest Football Players.

Horse breeding and racing and more

In 1970, Huff ran for a seat in the U.S. House of Representatives but lost in the West Virginia Democratic primary for the 1st district against Bob Mollohan by more than 19,000 votes.