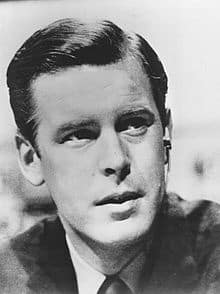 Here is one of the many obituaries of Peter’s death back then: ABC News Anchor Peter Jennings died today at his home in New York City. He was 67. On April 5, Jennings announced he had been diagnosed with lung cancer.

He is survived by his wife, Kayce Freed, his two children, Elizabeth, 25, and Christopher, 23, and his sister, Sarah Jennings.

“Peter died with his family around him, without pain and in peace. He knew he’d lived a good life,” his wife and children said in a statement.

“For four decades, Peter has been our colleague, our friend, and our leader in so many ways. None of us will be the same without him.

“As you all know, Peter learned only this spring that the health problem he’d been struggling with was lung cancer. With Kayce, he moved straight into an aggressive chemotherapy treatment. He knew that it was an uphill struggle. But he faced it with realism, courage, and a firm hope that he would be one of the fortunate ones. In the end, he was not.”We will have many opportunities in the coming hours and days to remember Peter for all that he meant to us all. It cannot be overstated or captured in words alone. But for the moment, the finest tribute we can give is to continue to do the work he loved so much and inspired us to do.”

“Laura and I were saddened to learn about the death of Peter Jennings,” Bush said. “Peter Jennings had a long and distinguished career as a news journalist. He covered many important events, events that helped define the world as we know it today. A lot of Americans relied upon Peter Jennings for their news. He became a part of the lives of a lot of our fellow citizens, and he will be missed. May God bless his soul.”

As one of America’s most distinguished journalists, Jennings reported many of the pivotal events that have shaped our world.

He was in Berlin in the 1960s when the Berlin Wall was going up, and there in the ’90s when it came down. He covered the civil rights movement in the southern United States during the 1960s, and the struggle for equality in South Africa during the 1970s and ’80s.

He was there when the Voting Rights Act was signed in the United States in 1965, and on the other side of the world when black South Africans voted for the first time. He has worked in every European nation that once was behind the Iron Curtain. He was there when the independent political movement Solidarity was born in a Polish shipyard, and again when Poland’s communist leaders were forced from power.

And he was in Hungary, Czechoslovakia, East Germany, Romania and throughout the Soviet Union to record first the repression of communism and then its demise. He was one of the first reporters to go to Vietnam in the 1960s, and went back to the killing fields of Cambodia in the 1980s to remind Americans that, unless they did something, the terror would return.

On Dec. 31, 1999, Jennings anchored ABC’s Peabody-award winning coverage of Millennium Eve, “ABC 2000.” Some 175 million Americans watched the telecast, making it the biggest live global television event ever. “The day belonged to ABC News,” wrote The Washington Post, “… with Peter Jennings doing a nearly superhuman job of anchoring.” Jennings was the only anchor to appear live for 25 consecutive hours.