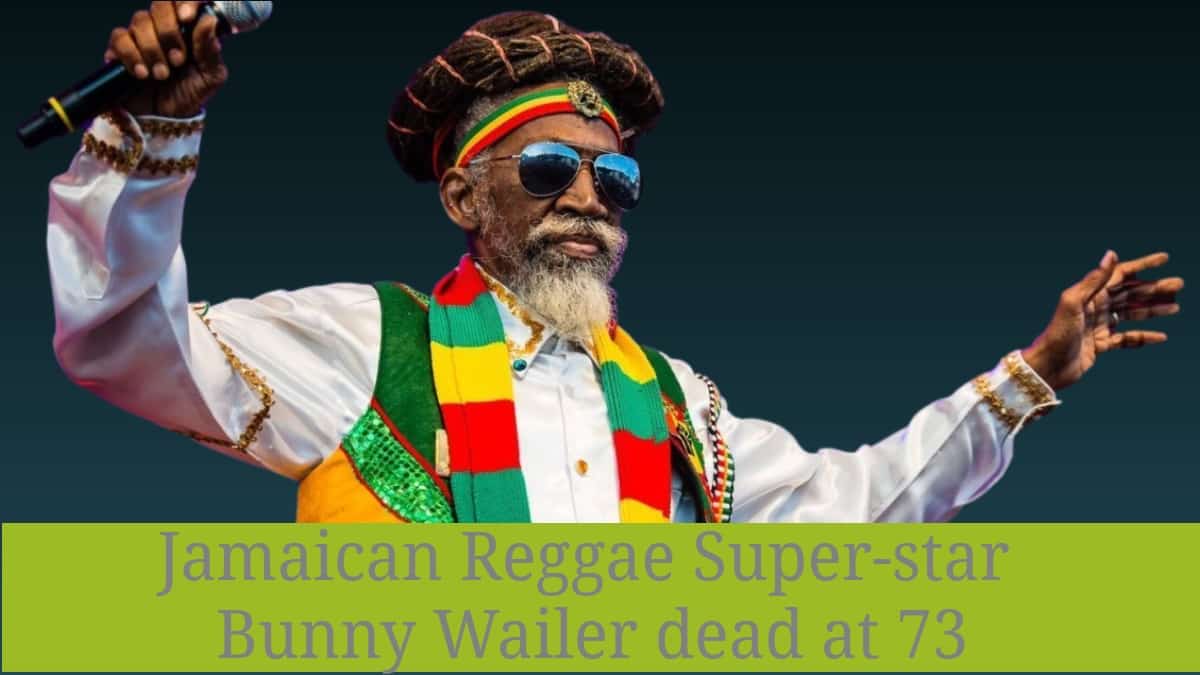 Born Neville O’Riley Livingston, but known professionally as Bunny Wailer, was born on 10 April 1947, and he died on 2 March 2021. He was one of the original members of the Jamaican Reggae group “The Wailers.” Bunny was a singer-songwriter and percussionist player. The other two original members of Wailers were Bob Marley and Peter Tosh. A three-time Grammy Award winner, he is considered one of the longtime standard-bearers of reggae music and was given Jamaica’s Order Of Merit in 2017.

He spent his earliest years in Nine Mile’s village in Saint Ann Parish, where he first met Bob Marley, and the two young boys befriended each other quickly. The two boys both came from single-parent families; his father brought up Livingston and Marley by his mother.

Together, they achieved international fame with reggae classics like Simmer Down and Stirred It Up before Wailer left to go solo in 1974.

The cause of death is unknown, but he had been in hospital since having a stroke in July 2020.

Tributes have already poured in for the musician, with fans and fellow musicians describing him as a legend.

“This is one of the lowest moments in the history of our culture,” wrote dancehall artist Shaggy on Facebook. “You have made us a proud king. Rest well.”

The star, whose real name was Neville O’Riley Livingston, had been the last surviving member of The Wailers, following Bob Marley’s death from cancer in 1981 and Peter Tosh’s murder during a robbery 1987.

Born on 20 April 10, 1947, Livingston spent his earliest years in Nine Miles’ village, where he was raised by his father, Thaddeus, who ran a grocery store.

That was where he first met Marley, and the toddlers soon became firm friends, making their first music together at Stepney Primary and Junior High School.

Following Marley’s father’s death in 1955, his mother, Cedella, moved in with Livingston’s father. The boys were essentially raised as step-brothers, especially after Cedella and Thaddeus had a daughter together, Pearl.

After moving to Trenchtown in Kingston, they met Peter Tosh and formed a vocal group called The Wailing Wailers – because, Marley said: “We started out crying.”

The area was poor and afflicted by violence. Livingston later remembered building his first guitar from “a bamboo staff, the fine wires from an electric cable and a large sardine can.

Other musicians who died

But singer Joe Higgs, aka “the Godfather of Reggae,” lived nearby and took the boys under his wing. Under his tutelage, they refined their sound, adding vocalist Junior Braithwaite and backing singers Beverly Kelso and Cherry Green before shortening their name to The Wailers.

In December 1963, the band entered Coxsone Dodd’s infamous Studio One to record Simmer Down, a song Marley had written calling for peace in the ghettos of Kingston.

Faster and harder than the music The Wailers later became known for, the song was an immediate hit, reaching number one in Jamaica. They followed it up with the original version of Duppy Conqueror before releasing their debut album The Wailing Wailers in 1965.