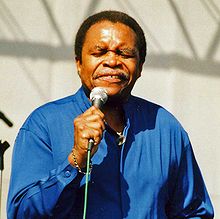 by News Contributor
in Gone But Not Forgotten, people that died today - celebs who died today
0

Otis Clay, the Hall of fame rhythm and blues artist known as much for his big heart and charitable work in Chicago as for his singing internationally, died Friday. He was 73.

The Mississippi-born Clay — whose gruff, tenor-tinged voice on blues songs such as Trying to Live My Life Without You varied from his haunting but hopeful baritone on gospel standards like When the Gates Swing Open — died suddenly of a heart attack at 6:30 p.m., said his daughter, Ronda Tankson.

The one-time Grammy nominee had a year of touring planned behind recent records and recognition at May’s 37th Blues Music Awards, manager Miki Mulvehill said. Clay is nominated for Soul-Blues Male Artist and Soul-Blues Album for This Time for Real, his collaboration with Billy Price.

“Otis was the last standard-bearer for deep southern soul music, the really gospel-inflected music that was in its heyday in the late ’60s and early and mid ’70s,” Price told The Associated Press on Saturday. “These styles change, and different styles are in the forefront, but Otis was just as strong in the past five years … For that reason, he was an icon for a lot of us who work in this genre.”

European music enthusiasts and record-collectors flock to Clay’s music because of its spare, “unvarnished” style wrought of the 1960s soul scenes in Memphis, Tenn., and Muscle Shoals, Ala., Price said.

A 2013 Blues Hall of Fame inductee who moved to blues-steeped Chicago in 1957, Clay had just begun planning a gospel tour of the U.S., followed by a summer European tour and, later, the Legendary Rhythm and Blues Cruise, Mulvehill said. His latest album is called Truth Is.
Well-known for his charitable spirit

But Clay was much more than a talented musician. A resident of Chicago’s West Side, he was an avid humanitarian whose charitable works included assisting development of the Harold Washington Cultural Center.

“Otis was the first one to jump on the ‘Can I help?’ train,” Mulvehill said.

Tankson, a Chicago special education teacher whose pupils include children with autism, said her father gave little thought to what benefit he’d get from performing and held nothing back, even when appearing for her students.

“He sang to them as if they paid and he was on stage,” Tankson said.

Friends and co-workers of Tankson’s, whom Clay had never met, repeatedly asked if he would sing When the Gates Swing Open at loved ones’ funerals. “He never let me down on that,” she said, adding that he once delayed a recording-session trip to Memphis to comply.

Clay was born Feb. 11, 1942 in Waxhaw, Miss., to a musical and religious family, according to his online biography. After his arrival in Chicago, he joined the Golden Jubilaires and in 1960 became part of Charles Bridges’ Famous Blue Jay Singers, performing a cappella at schools and hotels.

“We were known as variety singers, or we were billed as (performing) ‘Old Negro Spirituals and Plantation Melodies,”‘ Clay said in his biography.

His recording debut came in 1965 with the rousing ballad Flame in Your Heart. Four decades later, in 2007, he was nominated for a Grammy for the gospel CD Walk a Mile in My Shoes.