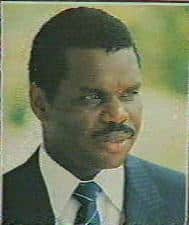 The search by police for Mr. Carbon was hampered by high seas and the colour of water. “The sea is very dirty” said one police officer. “Because of this, we are having problem seeing any thing in the water”, added that police officer.

Some Villagers said that the former Minister went out to sea against the wishes of his wife who was uncomfortable with him doing so the morning.

The other two men who had accompanied Mr. Carbon that dreadful day, were 63-year-old Peterson Austrie, father of the present Parliament Representative for the Cottage Capuchin Constituency, Reginal Austrie, and the other fisherman Wanne Jacob.

The incident happened between the Dominica and Martinque Channel, some time after mid-day on Friday March 8th, 1996. The two men who returned from sea that day said, Mr. Carbon was knocked off the small fishing boat by a wave while eating his lunch.

“The sea was not all that rough”, said Jacob, as he reported on what happened at sea on that `black’ Friday. Jacob telling his story said that, [“I was `piping’ in a tin, my head was down, you know when you doing that you always looking at it – I hear Mr. Austrie say, take it easy Carbon, when I look up I saw Mr. Cabon in the water some distance from the boat”]. The accident happened just off the Penville coast when a big wave washed Mr. Cabon off the fishing boat and into the sea.

Leader of the Dominica Freedom Party….the political party of which Mr. Carbon was a member, looking back at Mr. Alleyne’s life said, “a dynamic personally and an out standing young man was Mr. Carbon, in the ministry that he served. “Even though Mr. Carbon did not get to his position with much administration experience, he however was effective as a minister and achieved a great deal”, The party leader, Mr. Brian Alleyne said.

The Leader did not stop short in his praises of Mr. Carbon when he said, “the level of respect he managed both in government circles, among the people of Dominica, and in diplomatic circle was high indeed”.

16-year-old Alleyne Carbon Jr., speaking to reporters after hearing of his father’s disappearance at sea said, “my father suitcases were packed to leave over the weekend for a vacation abroad”. His father wanted to see and meet friends and family he had not seen for a long time, the son said. In a sadden voice, the former minister son said…..kind and hard working was his father. “Selfless, loving – was always there to help persons in need, and the Cottage Constituency”. In a soft spoken tone he said to reporters, “I will never forget my father taking me to school in the mornings”, Carbon Jr, described his father.

As family and friends grieved the disappearance of Mr. Alleyne Carbon, four days later, they also had to deal with the death of his father Mr. Elwin Carbon. He died on Monday 11 March, 1996 at his home in Cottage. He was ill for sometime.

Born in the Village of Cottage on April 7, 1952, the son of Elwin & Janette Carbon, he started his education at the Clifton Government School, then moved to Goodwill Junior High School. He joined the Public Works Department in 1972 and worked there for many years until becoming a minister in the Freedom Party Government, in 1993. He was given the ministry of Communication, Works & Housing, after Henry Dyer the then Minister of Communication Works and Housing was fired by Prime Minister Charles.

At the age of 28, he became the youngest parliamentarian in Dominica. Three years later, he was the youngest minister in Government. He remained the Minister of Communication, Works & Housing from 1983 until his D. F. P lost the general elections, on Monday 12 June, 1995, to the new United Works Party, headed by Edison James.

Just nine-months after loosing the Cottage Constituency seat that he held for fifteen-years to Reginal Austrie,of the Dominica Labour Party, on Thursday 21 March, 1996, he was laid to rest. Alleyne Carbon died at the age of forty-four, he was given a State Funeral in Dominica’s second town, the town of Portsmouth.

They came to his funeral service from all over Dominica to pay their last respect to the former minister who served his country and especially his Constituency so very well. In every corner of Dominica, his works can be seen form feeder roads, the widening and resurfacing of roads, water, electricity to telephone that he brought to some rural areas which needed these essential services.

It was during his period as Minister of Communication that, Dominica can boast of having one of the most advance telephone system in the World. The then minister saw the building of the Mary Eugenia Charles Boulevard, and the starting of the Fisheries Complex at the Roseau Bay Front.

ALLEYNE CARBON WILL ALWAYS BE REMEMBERED BY ALL WHO KNEW HIM.

He was a very Good and compasionate doctor

Ed Asner, the actor who portrayed Lou Grant, Carl from ‘Up,’ dead at 91

Ed Asner, the seven-time Primetime Emmy-winning actor, best known for his role on The Mary Tyler Moore Show, died at...

He was a very Good and compasionate doctor