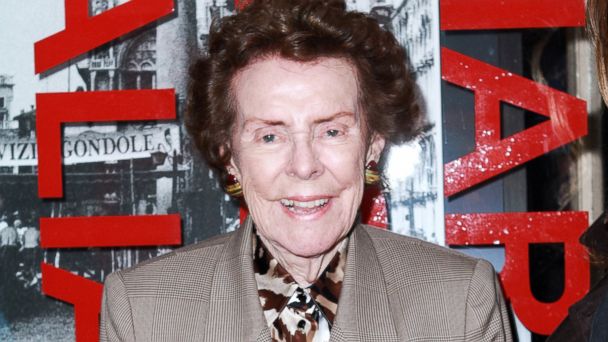 Modeling agency founder Eileen Ford, who shaped a generation’s standards of beauty as she built an empire and launched the careers of Candice Bergen, Lauren Hutton, Jane Fonda and countless others, has died.

She was 92 and died Wednesday, according to Arielle Baran, a spokeswoman for Derris & Co., which handles public relations for Ford.

Ford was known for her steely manner and great eye for talent. She demanded the highest level of professionalism from her models, putting them on strict diets and firing those with a taste for late-night revelry. Her discipline pushed Ford Model Agency to the top of its field, making multimillionaires of both Ford and her late husband, Jerry, who handled the company’s business affairs.

“I think our success came from Eileen’s energy and her bluntness and, to some extent, her comfort with confrontation,” Jerry Ford told USA Today in 1997. “A fortune teller once told her if she wasn’t an agent, she should be, because all the stars pointed that way. She’s always loved to tell people what to do.”

The typical Ford woman was tall, thin, often blond, with wide-set eyes and a long neck. Eileen Ford was known to tell hopefuls shorter than 5 foot 7 to give up their dreams.

The Ford look changed remarkably little over the years, and set a standard for the industry. Today, height and a willowy build remain paramount, though Ford was disdainful of the “waif” look — typified by British model Kate Moss — that swept the industry in the early 1990s.

Ford maintained that a model’s charisma was as important as her looks, and she prided herself on being able to detect successful personalities.

“There’s a cockiness to them … They’re just going to be good and you can just tell it,” she told Life magazine in 1970. “I see girls that I know — I absolutely know — will be star models within just a matter of weeks, and they always are.”

For high-fashion photography, she said, an ample bust was a disqualifier because the camera adds pounds and the curves distract from the picture. “A bosom is terribly detrimental because it cuts you all up in pieces,” she told The New York Times in 1967.

Ford often said she felt a motherly responsibility toward her models, and often invited her youngest hires to live at her Upper East Side apartment until they established themselves. She prohibited the young Kim Basinger from going out before finishing her French homework. And supermodel-to-be Christy Turlington once recalled pretending to do laundry at night so she could sneak out while the family slept.

The Ford agency continued to grow in the 1970s, when it began representing children, including a young Brooke Shields, and men. By then, Christie Brinkley, Jane Fonda, Ali MacGraw, Candice Bergen, Beverly Johnson and Suzy Parker had all been on the Ford roster.

John Casablancas provided stiff competition for the Ford agency when he founded rival Elite in the 1970s. He became known for wooing talent from other agencies — resulting in lawsuits — and stressing a more sensual, European look.

Eileen Ford was born Eileen Otte in New York City in 1922 and grew up in the leafy Long Island suburb of Great Neck, N.Y. She had a psychology degree from Barnard College and modeled occasionally as a student. After graduating, she helped several friends book modeling jobs, and founded the agency in 1946 with her husband.

As the agency’s success grew, Ford established herself as something of a brand. She began publishing books about beauty and fashion, including “Eileen Ford’s A More Beautiful You in 21 Days” (1972) and “Eileen Ford’s Beauty Now and Forever: Secrets of Beauty After 35” (1977). She also wrote a syndicated newspaper column, “Eileen Ford’s Model Beauty,” in the 1970s. The agency began a competition, eventually called the Supermodel of the World contest, in 1980.

Some 60,000 people a year turned out for the agency’s weekly open houses in Soho — where the agency is based — and on Ford’s scouting expeditions around the country. About 100 a year made it to the testing stage; of those, she estimated about 30 established a foothold in the business.

The agency’s revenues topped $40 million a year by the 1990s, as Eileen and Jerry Ford began to take a less active role. Their daughter Katie took over as CEO in 1995, though Ford and her husband remained on the board.

In 2007, the company was sold to an investment bank, Stone Tower Equity Partners, and Katie Ford stepped down as CEO. Jerry Ford died in August 2008.