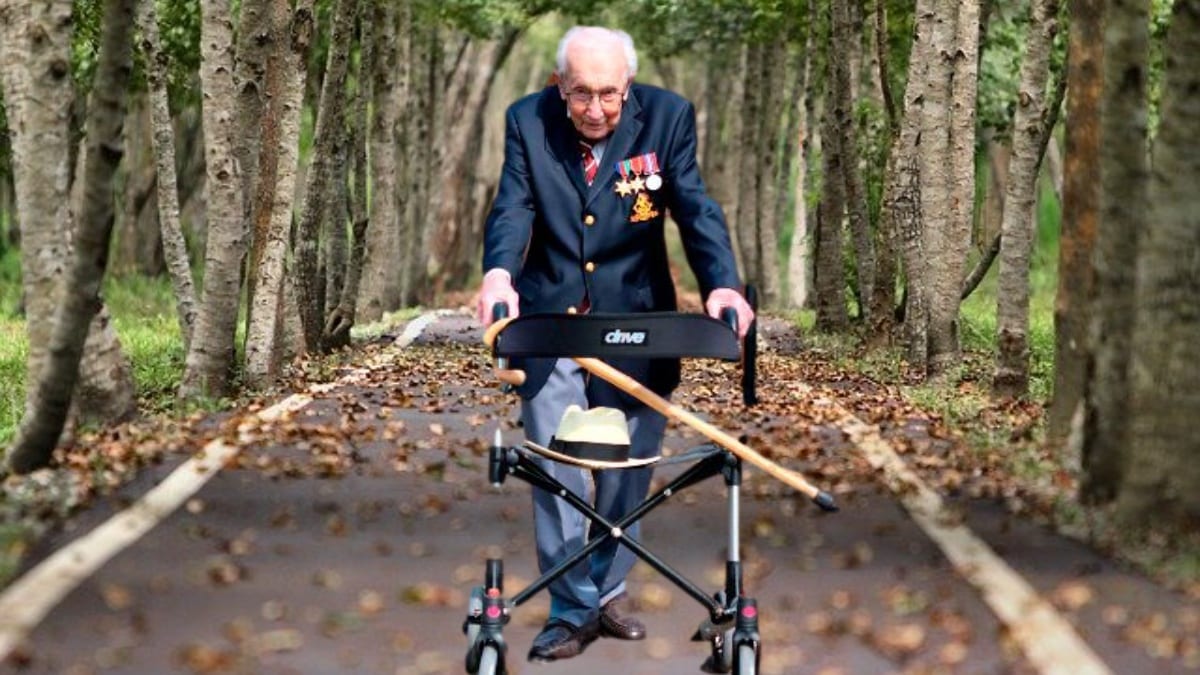 Captain Sir Tom Moore, who raised millions for the NHS, is dead at 100

Tom Moore, the 100-year-old World War II veteran whose efforts to raise millions for the UK’s National Health Service made him a universally adored icon during the first wave of the Covid-19 outbreak, has died in hospital after himself contracting the disease, his family said Tuesday.

Captain Sir Thomas Moore popularly known as Captain Tom, was a British Army officer and businessman known for raising money for charity in the run-up to his 100th birthday during the COVID-19 pandemic

Known affectionately as Captain Tom, Moore raised almost £33 million ($45 million) by walking laps of his garden last year. His exploits united a country frozen in lockdown and made him an unlikely celebrity late in his life, earning him a military promotion, a knighthood from Queen Elizabeth II, and a number-one single.

Tom Moore tested positive for the virus and was taken to a hospital on Sunday, suffering from breathing problems after being treated for pneumonia, his family said. They announced his death on Tuesday.

“It is with great sadness that we announce the death of our dear father, Captain Sir Tom Moore,” the family said in a statement to PA Media.

“The last year of our father’s life was nothing short of remarkable. He was rejuvenated and experienced things he’d only ever dreamed of,” they added. “While he’d been in so many hearts for just a short time, he was an incredible father and grandfather, and he will stay alive in our hearts forever.”

Buckingham Palace said the Queen was sending a private message of condolence to Moore’s family, as numerous British politics, culture, sport, and society paid tribute to him.

Moore’s fundraising efforts will long be associated with the UK’s plunge into lockdown last spring, and his death makes him one of the highest-profile victims of a virus that has claimed the lives of more than 100,000 Britons.

His campaign began as a family joke during his recovery from a broken hip, and he initially sought an unassuming target of £1,000 ($1,370) for his troubles. But within days, his slow but determined journeys around his backyard had attracted rounds of media attention.

Viewers would seek updates on Moore’s progress each day, and his final steps were cheered by supporters around the world.

“I’m overwhelmed by this sum of money,” Moore told CNN last year. “We never, ever for a minute, though we would get to this sort of money. We started with a little modest figure.”

Millions of Britons have received the first dose of a coronavirus vaccine. Captain Tom Moore would have been among the first Brits offered the vaccine, given his age, but he could not have a shot because he was being treated for pneumonia, CNN affiliate ITV News reported Monday.

“Captain Sir Tom Moore was a hero in the truest sense of the word,” Prime Minister Johnson said in a statement Tuesday. “In the dark days of the Second World War, he fought for freedom, and in the face of this country’s deepest post-war crisis, he united us all, he cheered us all up, and he embodied the triumph of the human spirit.”

“He became not just a national inspiration but a beacon of hope for the world,” Johnson said, calling his fundraising “astonishing.”

Labour leader Keir Starmer added that Moore “put others first at a time of national crisis and was a beacon of hope for millions,” adding: “Britain has lost a hero.”

“While we mourn his loss, we celebrate his life and will be forever grateful for his optimistic philosophy and wonderful spirit,” Moore’s foundation said. “Because of you, tomorrow will be a good day for so many more.”

Moore tested positive for Covid-19 on January 22 after returning home from the hospital where he had been diagnosed with pneumonia, his family told PA Media. He went back into hospital on Sunday after needing help with his breathing, his family added.

“Tom was able to have visitors to say goodbye to him at the end of his life. Yesterday evening his daughter Hannah and grandchildren Benjie and Georgia were able to be by his side and his daughter Lucy was able to speak to him on FaceTime.”

‘Beyond my wildest expectations’

Long before his fundraising earned him international attention, Moore climbed to the rank of Captain during his service in the British Army’s World War II campaigns in Burma (now Myanmar) and India.

Nicknamed “Tommy” by fellow troops, Moore held several different roles during the conflict, including tank commander, and at one point survived a bout of dengue fever.

“I’d already accepted that this was how it would be, but seeing it written down in black and white was quite a defining moment,” Moore wrote in his autobiography, describing the moment he was conscripted at the age of 20. “In truth, I was rather looking forward to the idea of being in uniform, traveling, and having different kinds of experiences.”

Having trained as a civil engineer, Moore became the concrete manufacturer’s managing director after the war ended.

Following his wife’s death in 2006, he moved in with his daughter, son-in-law, and two grandchildren in Bedfordshire, eastern England.

Asked why he believed his fundraiser had struck a chord with so many people, Tom Moore told CNN: “I think because our National Health Service is good… I had a broken hip, and I had cancer, and they treated me magnificently.

“I think people realize that… everyone, wherever they are, gets equally treated, just as well, with the same efficiency and kindness that we get from our nurses and doctors — who, after all, at the moment are on the firing line (of the coronavirus crisis).”

“It has gone far beyond my wildest expectations,” he added in his autobiography. “I want to thank everyone from the bottom of my heart.”

Soldiers from the 1st Battalion Yorkshire Regiment gave Moore a guard of honor as he completed his final lap in mid-April. Later that month, on his 100th birthday, he was promoted to Honorary Colonel in the British Army, recognizing his fundraising achievements. In July, the Queen knighted Moore in her first public duty since the pandemic began.

“If I kneel, I’ll never get up again,” Moore joked as he left his home for Windsor Castle at the time.

The Queen was one of many Brits expressing sadness at Moore’s passing on Tuesday. The Archbishop of Canterbury, the country’s most senior bishop, said that Moore “was the very best of us… where he walked, a nation followed.”

The Royal British Legion, an armed forces charity, added: “He epitomized the spirit of our wartime generation and was an inspiration to millions, bringing us all together in the most challenging of times.”