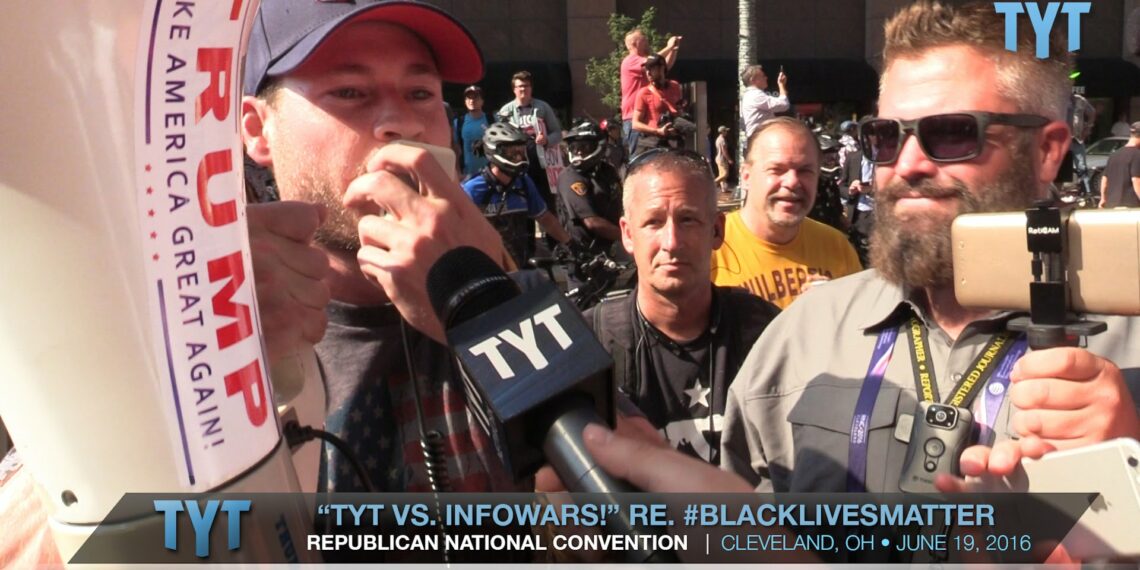 TYT vs. InfoWars re. #BlackLivesMatter At RNC Convention

by
in Gone But Not Forgotten
74

@JordanChariton and @EricByler of TYT Politics were returning to the 2 Republican National Convention in Cleveland after documenting a tense clash between protesters aligned with the #BlackLivesMatter movement and the radical Christian extremists group known as the Westboro Baptist Church. SUBSCRIBE to TYT Politics

As they crossed the street, they came across a man armed with a military assault weapon. He was being interviewed by a team of reporters from Japan, and, as Chariton waited for an opportunity to interview the man, the #BlackLivesMatter protesters began marching directly at them.

The marchers had an unwelcome Pied Piper in the lead: arch-conservative podcaster Owen Shroyer who was using high-powered megaphone to drown out hundreds of marchers, characterizing them as dupes of the establishment for fighting against police brutality.

When Shroyer and his supporters stopped and blocked the sidewalk, a confrontation seemed imminent, with the TYT Politics duo and several other reporters sandwiched in middle. But as the protesters approached the counter-protesters, Byler and Chariton engaged Shroyer in a debate about #BlackLivesMatter, which served to defuse a potentially volatile situation as the marchers passed by.

Shroyer attempted to discredit #BlackLivesMatter by asserting (incorrectly) that the movement was funded by a wealthy white progressive whom conservative media consumers have been exhaustively instructed to hate (George Soros). This rumor had been debunked by credible media outlets, but was continuing to make the rounds among right wing media consumers. At one point an onlooker shouted out, "It's TYT vs. InfoWars," referring to the incendiary and deliberately inaccurate website run by Alex Jones.