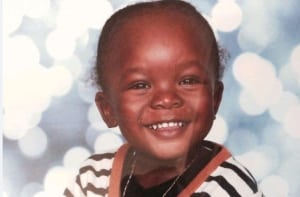 Mother of Elijah Marsh thanks Canadians for ‘outpouring of love’

The mother of Elijah Marsh the three-year-old Canadian boy who died Thursday February 19th, 2015 after he waned alone into a frigid Toronto night, is thanking Canadians for their “immense outpouring of love” the CBCNEWS reported.

The boy’s mother Georgette Marsh in a statement said “I cannot thank everyone enough for his or her support during this difficult time. We’re so grateful for the generosity we’ve seen from Canadians, and we’re all touched by the immense outpouring of love we’ve seen these past few days. “We’re devastated by the loss of Elijah, but we’re heart-warmed to see how many people have been touched by this story. Thank you so much”, she said

According to CBCNEWS, people have been supporting Elijah’s family through the crowd-funding campaign, which has raised more than $158,000 so far, and by placing tributes to the boy at a makeshift memorial in north Toronto. The person who started the crowd-funding campaign for Elijah’s funeral costs Justin Kozuch started told news reporters that he was in contact with a close friend of Elijah’s mother.

About 30 people, including Toronto Mayor John Tory, attended a vigil in the snow on Saturday outside the apartment building from where the boy walked away.

Tory said he attended “just to make sure this family knows that we’re all with them in their hour of need and their hour of grief.”

The group sang hymns, including Amazing Grace, under steady snowfall that began to cover the makeshift memorial of teddy bears, candles and flowers.

The crowd was comprised of friends, neighbours and strangers, including one man from Manitoba. Another man didn’t wear a coat, in tribute to the cold Elijah would have felt in his final hours.

Maria Caponigro brought her three-year-old son, who attended the same preschool as Elijah.

“We just told him that Elijah will not be coming to see your preschool room now, and that he’s now with the angels,” she said.

Elijah was found without vital signs just a few hundred metres from the apartment building where he was staying with family and was pronounced dead a few hours later in hospital.

Elijah was seen on video-camera footage leaving the building at about 4 a.m. in extremely cold weather. He was wearing a T-shirt, diaper and boots.

Kozuch said he’s grateful for the success of the crowdfunding.

“As parents, we go to the ends of the Earth to protect our children and we’ll do anything to keep them safe,” said Kozuch, who has a son the same age as Elijah.

Fundraising goal shattered Kozuch said his aim was to raise $20,000 when he started the campaign on Thursday.

Tilt.com is waiving all credit card fees for those who contribute.

“One person remarked on Twitter yesterday, ‘Cold faces, warm hearts,’ and I feel that really encapsulates the reaction that we’ve all seen from this story that touched so many people.”

All of the money, no matter how much is raised, will go to the family, Kozuch said.

Some contributors shared their thoughts after making a donation.

“This broke my heart,” said Jennifer Yearwood. “It’s the least I could do for that sweet little boy, Elijah.”
“The generosity of people in times of such great loss and tragedy is heartwarming,” said Dawn MacDonald. “God bless Elijah. You are now with the angels dear little man.”

Mike Colle, the MPP for the area where Elijah was found, said he was taking food and coffee to the boy’s
family Friday afternoon.

Colle said he has contacted the local school trustee and the wheels are in motion to have Elijah’s nearby daycare renamed after the boy.

“We can grieve, we can help with the funeral, we can do all this, but at least let’s try and make a bit of a positive thing out of here,” Colle said.

1 day ago … TORONTO – While the family of a Toronto toddler who died after spending hours in the frigid cold was making funeral … The arrest came a day after three-year-old Elijah Marsh died after … a.m., said they had put him to bed Wednesday night and woke up to find him gone and the front door open, police said.